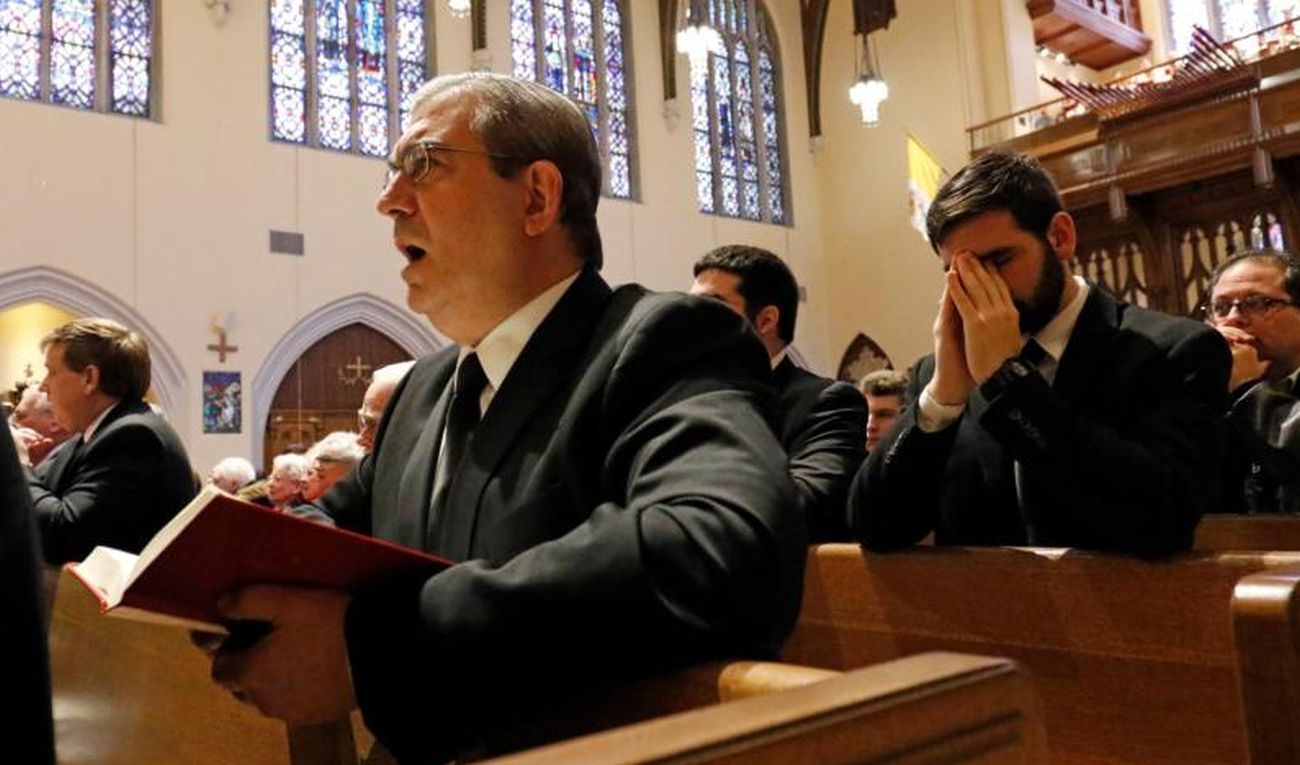 Marianist Brother Stephen Balletta, left, prays during a Mass marking World Day for Consecrated Life Feb. 5 at St. Agnes Cathedral in Rockville Centre, N.Y. Catholic religious orders must have the courage to start new forms of outreach, knowing that the only people who "never make mistakes are those who never do anything," Pope Francis said during a Feb. 9 meeting with 140 superiors general of men's religious orders. (CNS photo/Gregory A. Shemitz, Long Island Catholic)

VATICAN CITY (CNS) — Catholic religious orders must have the courage to start new forms of outreach, knowing that the only people who “never make mistakes are those who never do anything,” Pope Francis said.

“We will get things wrong sometimes, yes, but there is always the mercy of God on our side,” Pope Francis told 140 superiors general of men’s religious orders.

A transcript of questions and answers from the pope’s three-hour meeting with members of the Union of Superiors General last November was published Feb. 9 by the Jesuit-run journal, La Civilta Cattolica.

Running through Pope Francis’ responses to the questions on youth ministry, religious life, his personal approach to the papacy and evangelization was an emphasis on prayer, courage and, especially, discernment.

A lack of expertise in discernment, he said, “is one of the greatest problems that we have in priestly formation,” which focuses too much on “black and white” answers rather than on “the gray areas of life.”

“You look for the will of God following the true doctrine of the Gospel and not in the fixations of an abstract doctrine,” the pope told the superiors.

By choosing “Young people, faith and vocational discernment” as the theme for the Synod of Bishops in 2018, the pope said he hopes to draw universal attention to the importance of helping young people discover God’s call.

The decreasing number of priests and religious in the West, he said, is worrying, but some of the newer religious communities that are attracting many youths are also a concern.

Some small, new religious orders “are really good and do things seriously,” usually with close support and guidance from a bishop, he said. “But there are others that are born not from a charism of the Holy Spirt, but human charisma, from charismatic people who attract others by their alluring human skills.

“Some are, I could say, ‘restorationists’: they seem to provide safety and instead they offer only rigidity,” the pope continued. “When I am told that there is a congregation that attracts many vocations, I confess, I am worried. The Spirit does not work with the logic of human success.”

In the end, the life of the community members will prove whether or not it is the Lord at work, he said. Unfortunately, some already have ended with scandal, he said, although he did not name particular orders.

One of the tasks of religious orders in the church, he said, is to provide the charismatic and prophetic impulse that can keep the church, a diocese or parish from being totally absorbed with worldly concerns and keep its ministers from thinking they are “little princes.”

“You don’t need to become a cardinal to think of yourself as a prince,” Pope Francis said.

Clericalism is a danger to the church, as is the gulf sometimes existing between religious orders in a diocese and the local bishop and clergy, he said. “From a position of isolation, you cannot help one another.”

The task of the church is not to shore up its institutions, but to set out to help those who are materially or spiritually poor, the pope said.

One of the superiors present asked Pope Francis why he chose a series of Marian themes for the local celebrations of World Youth Day in 2017 and 2018, as well as for the international gathering in Panama in 2019.

“I did not choose them,” he said; the bishops of Latin America did, “and it seemed a very good thing.”

The focus, the pope said, will be on the Mary of Catholic faith, “not the postmistress who sends out a letter every day saying, ‘My child, do this and then the next day do that.'”

The true Mary “is the one who generates Jesus in our hearts,” he said. “The trend of the Madonna superstar, who puts herself at the center as a protagonist, is not Catholic.”

When he opened the session to questions, Pope Francis told the superiors they even could offer criticisms because “misunderstandings and tensions are part of life. And when they are criticisms that make us grow, I accept them, I respond.”

Asked later about how he maintains his serenity, the pope assured the superiors, “I do not take tranquilizers.” He said the Italians may be on the right track when they suggest that to be at peace, “you need a healthy dose” of “couldn’t care less.”

But, Pope Francis said, he was “more anxious,” tense and worried as archbishop of Buenos Aires, Argentina. From the moment he was elected pope in March 2013, he said, he has had an experience of peace “and it has not left me.”

When a problem arises, he said, he writes it on a piece of paper and slips it under a statue of a sleeping St. Joseph and lets the saint sleep on it. At this point, he said, the saint is sleeping on “a mattress of notes!”

Six hours of sleep every night and prayer are the daily routine, the pope said. “The breviary is very dear to me and I never leave it. Mass every day. The rosary. When I pray, I always take the Bible. And peace grows. I do not know if this is the secret. My peace is a gift from the Lord. Let it not be taken away!”

NEXT: Pope: Speechless before horror of Holocaust, pray it never happen again