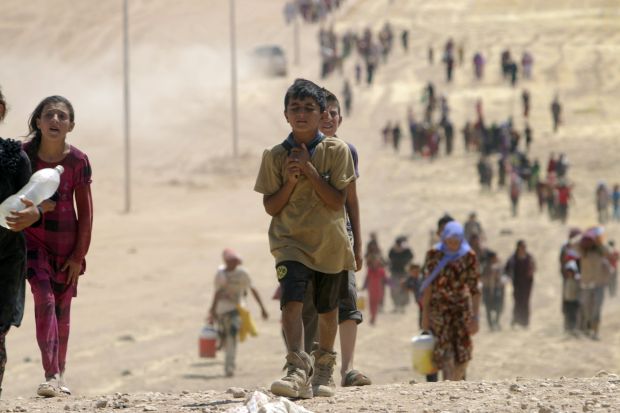 WASHINGTON (CNS) — Despite then-Secretary of State John Kerry’s declaration one year ago that Islamic State’s actions in Iraq and Syria amounted to genocide — and unanimous votes in the House and Senate asking Kerry to declare genocide against minority Christian, Yezidi and Shiite Muslim groups in the region — advocates at a first anniversary ceremony said they want more from the U.S. government than what’s been done to date.

While the genocide declaration is in itself rare, “there was more politics to the issue of genocide which I ever thought there could be,” said Catholic University of America law professor Robert Destro at a March 16 event at the U.S. Capitol Visitor Center sponsored by In Defense of Christians, an advocacy group for Middle East Christians.

“The victims want their sufferings to be recognized,” said Nadia Mourad, a Yezidi woman now living in Germany who had been kidnapped, raped and brutalized by Islamic State militants. Speaking through an interpreter, she added, “The genocide may happen for real if nothing is done.”

Mourad said, “A year has passed, and not a single ISIS fighter has been brought to justice.”

“Our work is not done,” said Rep. Anna Eshoo, D-California, who co-sponsored the House version of the genocide bill with Rep. Jeff Fortenberry, R-Nebraska. “We can’t take our foot off the pedal. We have to step on it.”

“We’re in a somber moment,” Fortenberry said. “The injustice continues. We cannot stop. … We have a concern about resecuritization,” the process by which minorities routed from their communities can return and rebuild without fear of further persecution. He added those who were “accessories to genocide” must be “brought to justice so that it never happens again.”

On March 17, Fortenberry and Eshoo joined Rep. Chris Smith, R-New Jersey, Rep. Sean Duffy, R-Wisconsin, and Sen. Bill Cassidy, R-Louisiana in sending a letter to Secretary of State Rex Tillerson and U.S. Ambassador to the United Nations Nikki Haley asking for an update on actions the U.S. has taken to investigate and “hold accountable the perpetrators” of genocide.

In the letter, the lawmakers also urged the U.S. to take the lead on related efforts at the U.N. and emphasized the need to seek justice for all of the victims of genocide, including Christians. Smith also is the author of the bipartisan Iraq and Syria Emergency Genocide Relief and Accountability Act of 2017.

Another speaker at the March 16 event was Zina Rose Kiryakos, a Chaldean Catholic attorney who heads the Iraqi Christian Human Rights Council, who said her great-grandfather was a Chaldean bishop in northern Iraq, which made her grandmother his niece. She recalled how the grandmother had heard stories from the bishop-uncle of how he would shelter Christians during “the 1915 genocide,” the Ottoman Turks’ slaughter of Armenians.

Despite last year’s genocide declaration, Kiryakos said, “a year later, the plight of Iraqi Christians is still evident.” Her three-step solution to bring justice to the region includes reparations and reconstruction aid; humanitarian aid for the 150,000 Iraqi Christian refugees and internally displaced persons; and to “rebuild our churches” on the Nineveh Plain. Some at the forum advocated the creation of autonomous zones in northern Iraq.

Stephen Colecchi, director of the Office of International Justice and Peace at the U.S. Conference of Catholic Bishops, outlined his own three-point plan to stem the potential for disaster. First was keeping the United Sates open to refugees and the victims of genocide. His second point was to engage the Iraqi government in Baghdad to strengthen the rule of law in the country.

Third was for the United States to identify funds for minority communities as they rebuild. Colecchi singled out Catholic Relief Services, the U.S. bishops’ international development and aid agency, and Caritas, the Vatican network of country-based Catholic aid organization as organizations that could provide their expertise.

Andrew Walther, vice president for communications and strategic planning at the Knights of Columbus, which produced a 300-page report last year detailing Islamic State atrocities against Christians, said, “We got the words right” in 2016. “Now is the time for right action.”

He noted that the United States spent $7 billion — $2.7 billion of it from the U.S. Agency for International Development — to aid the at-risk Christians and animists in the Darfur region of southern Sudan who were subject to privations by their own government. Before Kerry’s declaration in 2016, the last U.S. declaration of genocide was about Sudanese actions in Darfur in 2004.

“Genocide is not just a word, it’s not a thing we say, it’s something we act on,” Walther said.

“We have easy lives in this country. We don’t get tortured, we don’t get killed for religious freedom,” said Kristina Arriaga de Bucholz, a commissioner on the U.S. Commission on International Religious Freedom. “We are aware of the suffering of your people, and we will not forget.”

“It’s very humbling to be here. It’s also very humbling and saddening to have to be here,” said Naomi Kikoler, deputy director of the Simon-Skjodt Center for the Prevention of Genocide at the U.S. Holocaust Memorial Museum. “We saw the warning signs (of genocide) and failed to do anything about them.”

Kikoler added, “We have seen people targeted in Iraq for decades. We have to finally hold people accountable for their crimes. … The words ‘never again’ are not simply rhetoric. They have to mean something.”