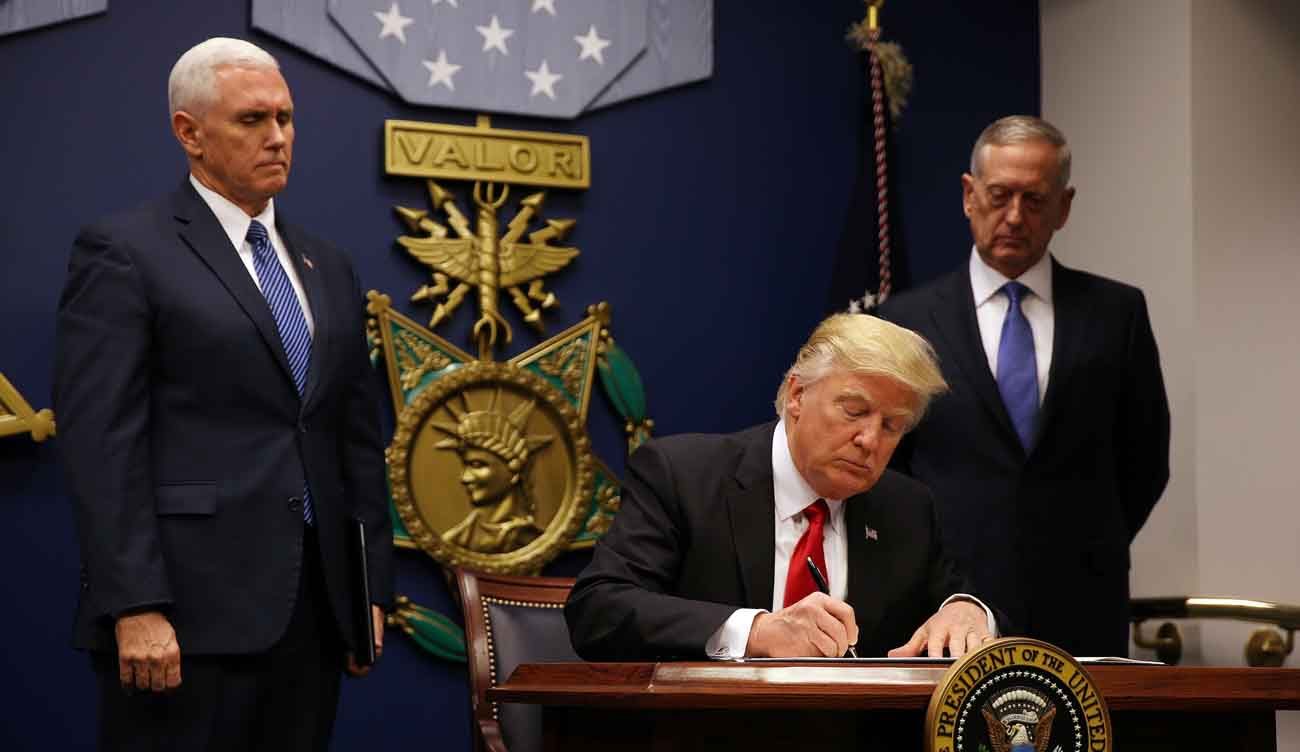 NASHVILLE, Tenn. (CNS) — President Donald Trump, during a campaign rally in Nashville, vowed to fight the latest court ruling blocking his executive order temporarily suspending immigration from six Muslim-majority countries and refugee resettlement all the way to the Supreme Court.

“We’re going to fight this terrible ruling,” the president told a crowd of cheering supporters in Nashville’s Municipal Auditorium March 15. “The danger is clear. The law is clear. The need for my executive order is clear.”

Before the rally, the president visited the Hermitage, the home of President Andrew Jackson, and laid a wreath at his grave in honor of the 250th anniversary of the seventh president’s birthday.

Earlier in the day, U.S. District Judge Derrick Watson of Hawaii issued a temporary restraining order against Trump’s travel ban. In his order, the judge ruled that the government had not proved that the ban was needed to protect the country from terrorists trying to infiltrate the country through legal immigration or the refugee program.

The travel ban would have barred citizens of Iran, Libya, Somalia, Sudan and Syria from entering the U.S. for 90 days and all refugees for 120 days. It was the Trump administration’s second attempt at implementing a travel ban. After the first order was blocked by a judge, Trump issued a new order that eliminated Iraq from the list of countries.

The new order was block by a second federal judge, besides Watson. U.S. District Judge Theodore Chuang of Maryland ruled the Trump order was meant to be a ban on Muslims and therefore violated the First Amendment.

During the Nashville rally, the president said his administration is “working night and day to keep our nation safe from terrorism. … For this reason, I issued an executive order to temporarily suspend immigration from places it cannot safely occur.”

“They best way to keep … radical Islamic terrorists from attacking our country is to keep them from coming to our country in the first place,” Trump said. “This ruling makes us look weak, which we no longer are.”

The travel ban was one of several issues the president addressed in his speech, which touched on a broad swath of issues and was very much in the style of his campaign rallies during the 2016 presidential campaign.

The president aligned his agenda with that of Jackson. “He understood real leadership means putting America first.”

“We’ve been putting very much our America First agenda into action,” Trump said. “We have just gotten started. Wait till you see what’s coming, folks.”

Earlier in the week, the Congressional Budget Office released its analysis of the bill, which projected that the bill would trim the federal deficit by $337 billion over 10 years, but would leave 24 million fewer people covered by health insurance by 2026. The bill would remove the individual mandate requiring people to buy health insurance or pay a tax penalty and would also end the expansion of the Medicaid program under the Affordable Care Act.

The changes in the Medicaid program under the American Health Care Act would lead to 14 million more people without insurance, according to the budget office.

Despite fierce debate over the bill among Republicans in Congress, the president predicted it would pass. “And then we go on to tax reduction, which I like.”

Trump touched on several other areas of his agenda, including cutting government regulations on businesses, cutting the budget while increasing spending for defense, pulling the U.S. out of several trade agreements, and building a wall along the country’s southern border.

The appearance at Municipal Auditorium was organized and paid for by the president’s re-election campaign, which was launched in mid-February.

While the president spoke inside Municipal Auditorium, thousands of protesters took to the streets of downtown Nashville to stand up for causes they believed in, including health care access, immigrant and refugee rights, workers’ rights and more.

Along with anarchists dressed in black, Planned Parenthood supporters in bright pink hats and thousands of other Trump protesters, people of faith were on hand protesting Trump’s policies.

Bobbi Negron was there with her husband and toddler. She is a teacher at St. Bernard Academy in Nashville and co-founder of Workers’ Dignity, a nonprofit organization that helps low-wage workers, many of whom are Latino, stand up against wage theft and workplace abuses.

“We’re here because our neighbors and friends are living in fear. They don’t know if they will be picked up and deported,” she told the Tennessee Register, newspaper of the Nashville Diocese.

As a Puerto Rican-American, Negron said she felt it was her duty to stand up for immigrants, especially Muslims and those in the country without documents, who are feeling particularly targeted right now. “We practice what we believe,” she said. “You have to come out and show up.”

Telli is managing editor and Laurence a staff writer at the Tennessee Register, newspaper of the Diocese of Nashville.

NEXT: Bagpipes, drums more than St. Patrick’s Day music for the McPhees