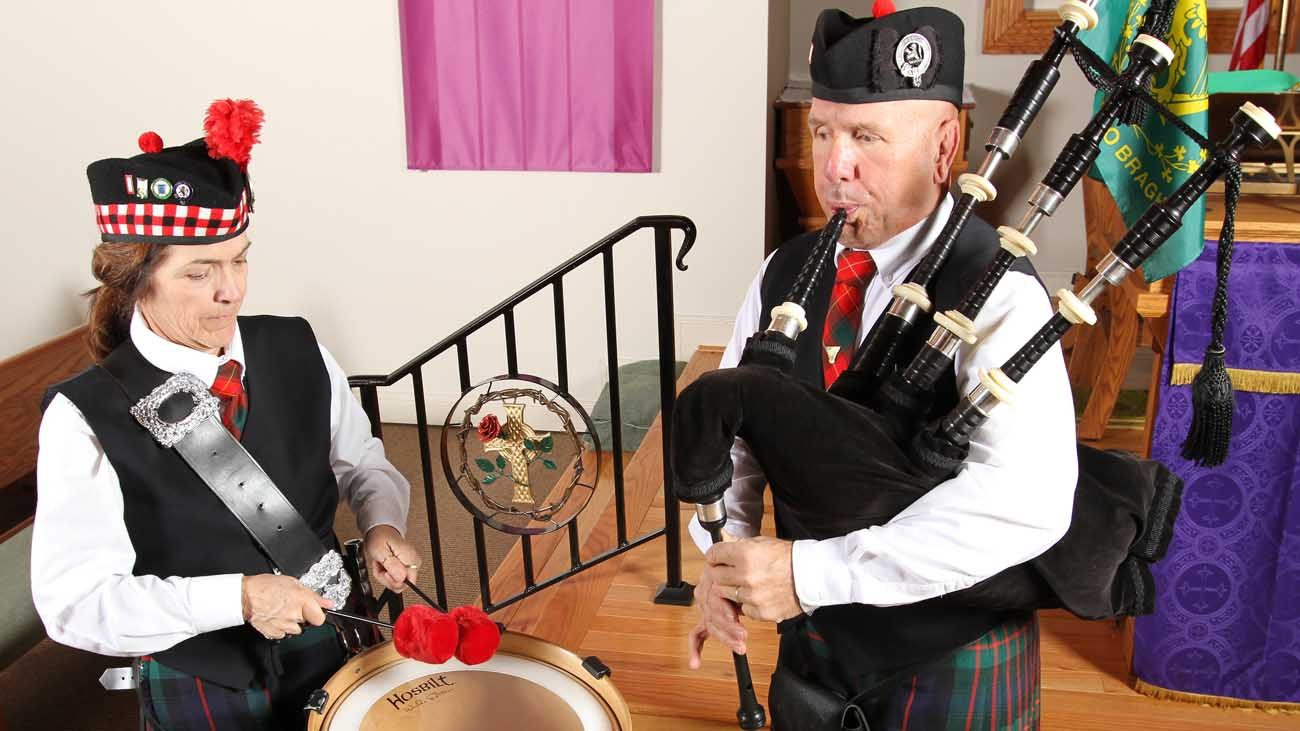 Missy and Richard McPhee, who were married on St. Patrick's Day in 1979 at the Church of St. Jerome Church in their hometown of East Rochester, N.Y., perform in a March 2 photo. Today they attend St. Mary, Mother of God Church in Jackson, Ga., where they have been members for nearly eight years. (CNS photo/Michael Alexander, Georgia Bulletin)

JACKSON, Ga. (CNS) — As a kid, Richard McPhee played the clarinet. But when his firefighter father asked for “Amazing Grace” at his funeral with the skirl of the pipes, McPhee pledged to his father, he’d take care of it.

Now the family does not take a trip without the bagpipes. From national parks and Mount Vesuvius in Pompeii to the U.S. Military Academy at West Point, the pipes have made an appearance.

During a recent morning at their parish church, St. Mary, Mother of God in Jackson, the boom of the drum and the pipes could be heard from the parking lot. It was Missy McPhee swinging the mallets with a flourish, keeping the beat to Rich’s pipes for “Scotland the Brave.”

This was a rare unscheduled morning for the McPhees, especially in March. The couple has plenty of performances on and before St. Patrick’s Day — in Atlanta and outside the city.

The McPhees are members of the Atholl Highlanders Pipes and Drums USA. The band performed in Atlanta’s St. Patrick’s Day Parade, held March 11. The day before Richard played at the annual tribute to Civil War pastor Father Thomas O’Reilly at Atlanta City Hall.

The McPhees are natives of Rochester, New York. They grew up in the same parish, St. Jerome. Born to families with generations of firefighters and police officers, they trace Celtic roots to Scottish and Irish immigrants.

They knew each other as teens, but only because Richard was friends with Missy’s older brother. There weren’t any romantic sparks. That is until Richard came home from the U.S. Military Academy and called her. That began a courtship. They exchanged vows at their parish on St. Patrick’s Day in 1979.

That was the start of an itinerant career in the military of more than 30 years.

“We left, and we never really went home,” he told The Georgia Bulletin, newspaper of the Archdiocese of Atlanta.

There were deployments to conflict zones, from the deserts of the Middle East to the Balkans and the Korean Peninsula. There were more than 20 moves over the years.

Through it all, the two credit their faith for keeping their family together. The Catholic chapel on a military installation became an instant source of friends as the McPhee family packed up to a new state or country, with three children in tow.

Shared faith tied the family together through all those hardships, Missy said about the constant moving. “That is the core of our family, our faith.”

One of the big tests was during the Gulf War in 1991. Missy was giving birth in a hospital in Germany to their youngest child.

“I was in the desert,” Richard said. “You better have a strong faith.”

They finally settled in central Georgia after serving at military bases around the South. He retired holding the rank of brigadier general after a tour at the now-closed Fort McPherson in Atlanta.

Their son, Rich, graduated in 2009 from Our Lady of Mercy High School in Fayetteville, and from the U.S. Military Academy in 2013. He serves in the Army. Their two daughters work, one as a social worker and the other as a physician assistant.

Missy and Richard’s kilts are green with red stripes of the Murray tartan. With a nod to the family tree, the neckties are the color of the McPhee family clan. Pins of the crests of the McPhee clan and her Connell clan decorate Missy’s Glengarry cap. Along with them is a service flag pin with two stars for their active duty son and daughter-in-law.

Missy, 58, on the tenor drum, and Richard, 60, on the pipes, acknowledged playing in a Celtic band may not be for everyone. But Atholl Highlanders works with anyone, no prior musical experience necessary. They’ll teach anyone to play the drums and the bagpipes.

“There are only nine notes. Simple,” Richard said.

Founded 30 years ago, Atholl Highlanders is a nonprofit organization that has earned top awards at the Savannah Scottish Games and the Charleston Scottish Games in South Carolina in recent years.

The pipes are a part of the family. “We go nowhere without our pipes,” acknowledged Richard, who in 2014 fulfilled his father’s wish that at his funeral he play “Amazing Grace” on the pipes.

While still on active duty as a general, Richard even played for the couple’s son on his first day as a West Point cadet. His father told him to open his window at 9 p.m. Richard stood on the parade grounds and proceeded to play.

National parks, family vacations, no reason necessary; the McPhee children had to get used to being embarrassed.

“They have been a part of our life,” Richard said.

Nelson is a staff writer at The Georgia Bulletin, newspaper of the Archdiocese of Atlanta.