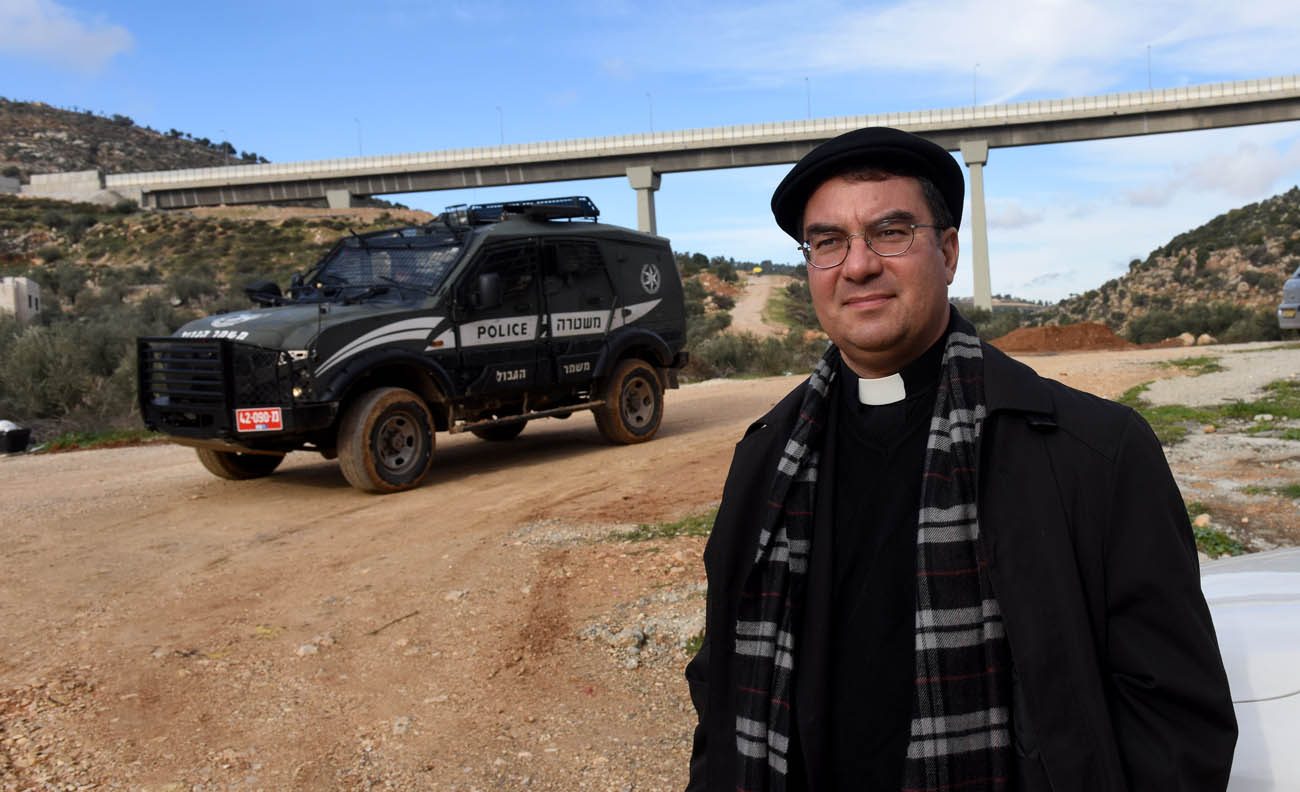 Bishop Oscar Cantu of Las Cruces, N.M., stands in front of an Israeli border police jeep in 2016 near Palestinian land in the Cremisan Valley in Beit Jalla, West Bank. As chairman of the U.S. bishops' Committee on International Justice and Peace, Bishop Cantu gave a report on human rights and religious persecution June 15 during the bishops' spring assembly in Indianapolis. (CNS photo/Debbie Hill)

But his trips are far from relaxing. Rather, his travels take him to places of unrest and religious persecution.

Bishop Cantu is chairman of the U.S. Conference of Catholic Bishops’ Committee on International Justice and Peace.

In a June 15 presentation during the bishops’ spring assembly in Indianapolis, he briefed his brother bishops on the sobering topic of international persecution and human rights violations, and what his committee has been doing the prelates behalf to improve the situation.

He described a recent solidarity visit to countries in Asia and the Middle East.

“Pakistani bishops said that blasphemy charges can bring (a judgment) that kills people with impunity,” he said. “Christians and other minorities suffer discrimination in education and employment.”

He also cited a study by the Pew Research Center showing other regions, besides Asia and the Middle East, where Christians suffer persecution. The study reported that Christians suffer harassment in more countries than any adherents of any other religion.

Religious persecution “includes both social hostilities and government restrictions,” Bishop Cantu explained. “It finds expression in physical assaults, arrests and detentions, desecration of holy sites, and in discrimination against religious groups in employment, education, housing, the selection of a marriage partner and whether you are considered a citizen.”

He said Christians’ response to religious persecution tends to fall into one of three categories, according to a study called “In Response to Persecution,” published by the University of Notre Dame’s Center for Ethics and Culture, the Religious Freedom Institute, and Georgetown University’s Religious Freedom Research Project.

Another response is more expressive — “association.” This consists of “built-in relationships, bridges and partnerships with elements of the dominant society,” he said.

The third category is the most proactive response — confrontation — which “involves openly challenging persecution by government or non-state actors,” he explained. “It might mean organizing nonviolent protests or doing human rights advocacy in courts.”

“In our committee’s work, we respect the approaches adopted by the local church,” the bishop said. “Like a physician, our first duty is to do no harm. We adopt strategies that complement the work of the local Church.”

“At times it is dangerous for the local church to be publicly associated with church leaders from the United States due to U.S. actions or policies, for example in the wake of a U.S. drone strike that killed civilians,” Bishop Cantu said.

Other work of the committee includes expressing support for legislation in Congress, like the Iraq and Syria Genocide Emergency Relief and Accountability Act, HR-390, which passed the House June 6. The Senate now must take up the bill.

“It calls for much needed assistance for survivors of genocide, and promotes holding the perpetrators accountable,” he said, noting that “religious persecution of Christians in Syria and Iraq is a distinct crisis within a wider crisis.”

But progress is being made, Bishop Cantu reported.

In a solidarity visit to Iraq two years ago, he met a bishop who “hoped to open a university so that young people who are displaced from Mosul could continue to study.” That university has been up and running for a year and a half.

Additionally, he said, the Catholic bishops in Iraq are providing funds for housing and churches and are opening schools “to get Christians to stay” in their homeland.

Beyond HR-390, to help the situation in Iraq and Syria, the U.S. “should encourage the central government in Baghdad and the local government in Erbil to strengthen the rule of law based on citizenship; ensure the protection of vulnerable minorities; provide international assistance …; and allow for the appropriate self-government at the local level.”

Bishop Cantu called on the U.S. Catholic Church to encourage prayer for persecuted Christians and to encourage awareness of their plight.

He said the USCCB’s website has a special page to educate people about the Christian presence in the Middle East, he said. “Part of that education needs to include an accurate understanding of Islam, and dialogue with our Muslim neighbors.”

He urged the bishops to encourage Catholics to contribute to agencies that provide aid, such as Catholic Relief Services, Aid to the Church in Need, and the Knights of Columbus.