In Washington, Salvadoran diaspora in awe of first Salvadoran cardinal 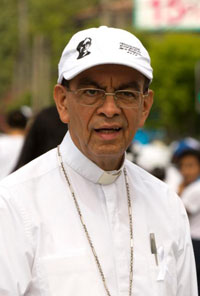 WASHINGTON (CNS) — As El Salvador’s first cardinal receives his red hat June 28 at the Vatican, he will have the eyes of his flock at home but also of the Washington area, home to approximately 260,000 Salvadorans — one of the largest communities of Salvadorans outside of the Central American nation.

For years, he has frequently visited Salvadorans abroad, including many who were forced to flee their native country during its civil conflict from the late 1970s until the early 1990s, said Father Villalta, a native of El Salvador and pastor at the Shrine of the Sacred Heart in Washington. He has tried to learn about the diaspora and even spent time teaching some expats and their children El Salvador’s national popular spiritual hymn, which is an ode to Christ as “savior of the world.”

“He has come (to the United States) to listen, to strengthen our faith … to be a pastor and representative of the Salvadoran church for those of us who live abroad. … He has known how to guide us,” said Father Villalta, who, like many of his Salvadoran parishioners, fled El Salvador during the war..

The priest is serving as the cardinal-designate’s personal secretary during the consistory at the Vatican, or formal meeting of the College of Cardinals meeting, that will yield El Salvador’s first cardinal and four other new cardinals for the church.

Salvadorans in Washington’s Catholic circles were happy and in awe when they heard in the early morning May 21 the news via social media that the man who has often visited them would be named a cardinal, said Father Villalta.

“You could feel the joy of the Salvadoran community in the exterior,” he told Catholic News Service. “It was such a great honor. At Mass, you could tell in people’s faces … the pride.”

And El Salvador needs good news. In 2016, it was named the world’s most deadly country outside a war zone because of its homicide rate, with rampant gangs terrorizing the citizenry, driving many to seek refuge abroad. Even before gangs were a problem, the country’s citizens suffered during a 12-year civil conflict that included the 1980 assassination of the country’s Archbishop Oscar Romero, a friend and mentor of the cardinal-designate.

Trinitarian Father Juan J. Molina, director of the U.S. bishops’ Office for the Church in Latin America, said in naming as a cardinal the man who for many years has served as auxiliary bishop of the Archdiocese of San Salvador, the church recognizes his fidelity to the Gospel but also singles out an example of justice and solidarity that Cardinal-designate Rosa Chavez expressed in his loyalty to the memory of Blessed Oscar Romero.

“He did so in a time when that was not appreciated … and did it at a personal cost. For the Salvadoran diaspora, that’s very important,” said Father Molina, who is originally from El Salvador. “We cannot leave behind the ideals of the Gospel wherever we are just because we want to be accepted and recognized.”

Sonia Marlene Aquino, a Catholic Salvadoran living in Washington, said the cardinal-designate has set an example, not just for Salvadorans but for the rest of the church. However, there is a certain degree of pride that such a “testimony of love” comes from her native country, she said.

“His humility is like the fertile land in our beloved El Salvador,” she said. “Good fruit has been obtained through his prayers, perseverance and love for the people. His works, especially toward those who are most in need and marginalized, are testimony to what Jesus asks of each of us.”

During the country’s sufferings, including the war, natural disasters, and now the gang problems, he has known how to stay calm and close to the suffering of his flock, said Aquino.

Some of that suffering is reflected in the new cardinal’s coat of arms, which features a palm frond as a symbol of the Salvadoran church’s persecution and martyrdom, a hand grabbing another hand, a symbol of the church’s option for the poor, and a sprig of rosemary because in Spanish “Romero,” the last name of the slain archbishop, means rosemary.

His motto is “Christ is our peace,” and peace is something the new cardinal stands for at a critical time in El Salvador, said Father Villalta.

“The Salvadoran society very much needs a conciliatory person who helps the different factions to reconcile and to forgive, ” he said. “It’s not just a slogan, but he really is a person who has peace and can bring forth peace. … There is a lot of talk about peace in El Salvador, but in reality, we do not have it.”

NEXT: Taking ‘vital coverage’ from those in need ‘unacceptable,’ says bishop