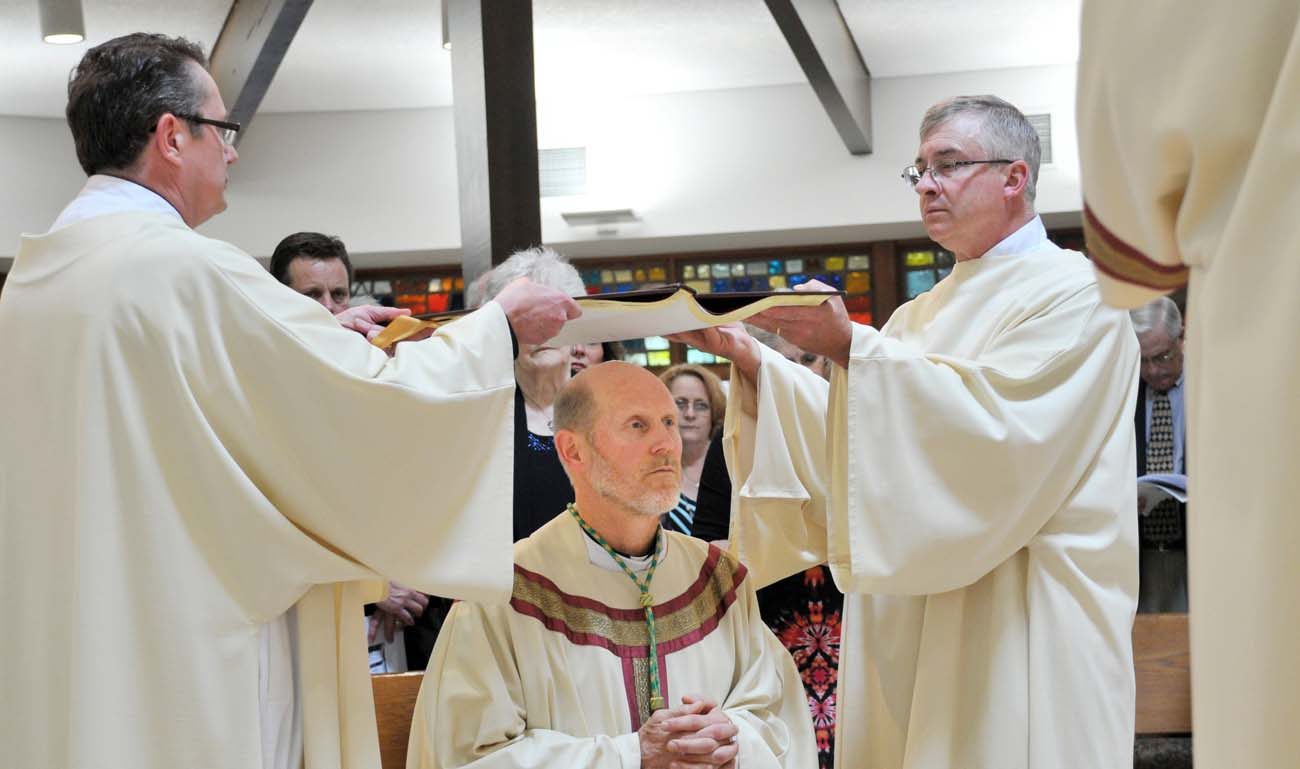 Deacons of the Diocese of Davenport, Iowa, hold the Book of Gospels over Bishop Thomas R. Zinkula's head during his ordination and installation as the new bishop of Davenport June 22 at St. John Vianney Church in Bettendorf, Iowa. (CNS photo/Lindsay Steele, The Catholic Messenger)

DAVENPORT, Iowa (CNS) — No one who attended the ordination of Bishop Thomas R. Zinkula was alive the last time a bishop was ordained in and for the Diocese of Davenport more than 100 years ago.

While Bishop Zinkula is the ninth bishop of Davenport, he is the first to be ordained in the diocese since 1884. Previous bishops were ordained to the episcopacy in other dioceses. 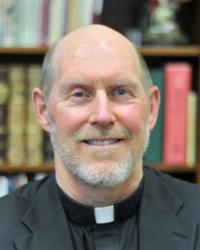 The new bishop’s humility, humor and expressed desire to be faithful to the people he will now serve was readily apparent during the historic ceremony witnessed by 1,000 invited guests at St. John Vianney Church in Bettendorf.

Referring to the church’s nuptial imagery, Christ as the bridegroom and the church as his bride, Bishop Zinkula declared: “We’re married today. As far as I’m concerned, the love affair has begun.”

Archbishop Michael O. Jackels of Dubuque presided at the ordination and installation of Bishop Zinkula, one of his own priests.

“I don’t know whose buttons are bursting more, the Zinkula family or the church family of the Archdiocese of Dubuque,” Archbishop Jackels said at the start of Mass.

Archbishop Christophe Pierre, apostolic nuncio to the United States, paid tribute to Iowa’s papal connection in his introduction of the apostolic mandate confirming Bishop Zinkula’s appointment. He recalled St. John Paul II’s first visit to the U.S. and his reflection on the bread of life alone satisfying the deepest hunger of humanity during the Mass he celebrated at Living History Farms in Urbandale.

“While we are mindful, said the pope, of the physical hunger of millions of our brothers and sisters on all continents, at this Eucharist we are reminded that the deepest hunger lies in the human soul. Even if all the physical hunger of the world were satisfied; even if everyone who is hungry were fed by his or her own labor or by the generosity of others, the deepest hunger of man would still exist. How timeless and timely are the words of this saintly successor of Peter,” Archbishop Pierre said.

Then, addressing the not-yet-ordained bishop, the nuncio said, “At this truly important moment of your life, and in that of this beloved local church, we are confident that through your faithful episcopal ministry, you will feed the flock being entrusted to your pastoral care with Jesus, the bread of life, the shepherd of souls to their spiritual betterment and to that of the community at large.”

Scanning the large gathering, the nuncio, asked: “Where is Bishop Martin Amos?” The bishop, whose recent retirement led to Bishop Zinkula’s appointment, was seated among a sea of white albs with his fellow bishops. He received a standing ovation, and was moved by the acknowledgement of his 11 years shepherding the diocese.

During his homily, Archbishop Jackels shared a legend about St. Paulinus, a fifth-century bishop of Nola, Italy, who became a slave to keep a widow’s son from that fate. “For one who is called to mission as a bishop, his gift of self will look like that essential act of St. Paulinus — with a great heart, close to God in devotion, close to his people in ministry, sacrificing his very self, your very self, in their service,” he said.

During the litany of supplication before the formal ordination the bishop-designate reflected on the communion of saints and how his father, Robert, who died in November, was among the gathering at the liturgy, but in a different way. The bishop’s mother, Mary, who is 88, and his eight siblings and other family members were in the church.

After the litany, Archbishop Jackels and the other bishops laid hands on the bishop-designate and then the Book of the Gospels was placed over his head by Deacons Mark Comer and Daniel Goetz. For Bishop Zinkula, that ritual was powerful.

“When I experienced that, I was thinking, this ministry is bigger than me. This is the Gospel, and I need to be true to the Gospel. This ritual is so beautiful. I was feeling a joyful, spiritual weightiness,” he said.

In closing remarks, the new bishop gave thanks to every group represented in the congregation — from laity and clergy and vowed religious to family and friends. He called for another round of applause for Bishop Amos. Then, the new bishop thanked Archbishop Pierre, but turned to the congregation and said, “If you aren’t happy with my ministry at some point, you can blame him because he talked me into this.”

“So, if I don’t do a good job, it’s your fault,” he joked. But he said he also was attuned to the Holy Spirit acting in his life, noting after Mass, “I’m banking on the Holy Spirit to make me a good bishop.”

Arland-Fye is editor of The Catholic Messenger, newspaper of the Davenport Diocese.

NEXT: In Washington, Salvadoran diaspora in awe of first Salvadoran cardinal