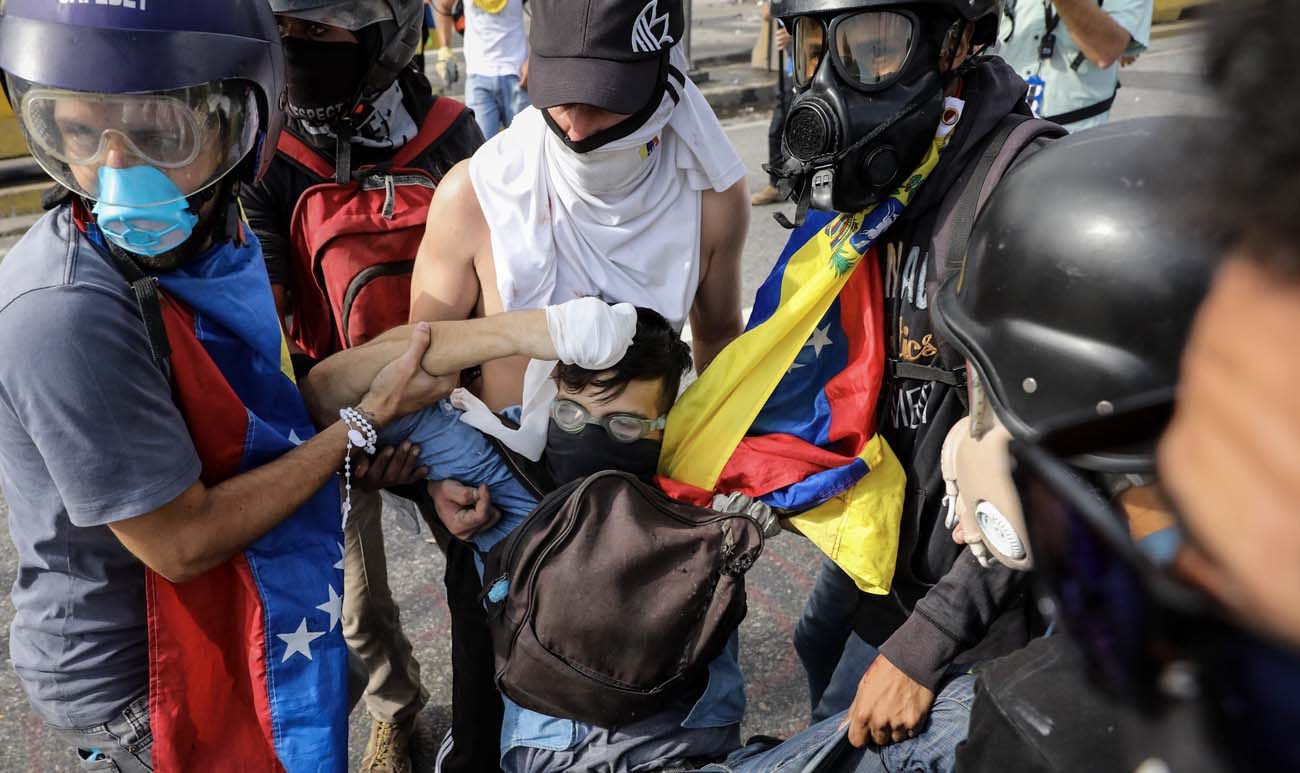 A group of demonstrators tries to help 22 year-old David Jose Vallenilla after he was shot by a Venezuelan military police sergeant June 22 in Caracas. Vallenilla later died from his wounds, bringing to 76 the total number of people killed in the protests. (CNS photo/Miguel Gutierrez, EPA)

VATICAN CITY (CNS) — Two former Latin American presidents said the world is running out of time to find a solution to the crisis in Venezuela as President Nicolas Maduro aims to consolidate power over the country.

Despite widespread protests, Maduro’s push to “put a group of his friends in what is called a ‘constituent assembly,’ would be the end of democracy and the annihilation of the Republic of Venezuela,” said Jorge Quiroga, former president of Bolivia.

That election “will install a Soviet state in Venezuela, liquidate democracy, end the Congress, cancel elections and turn Venezuela into a sort of Caribbean ‘North Korea,'” he said.

Joined by former Colombian President Andres Pastrana, Quiroga spoke to journalists at the Vatican June 23 on the deteriorating situation in Venezuela and attempts to diffuse the crisis following their meeting with Cardinal Pietro Parolin, Vatican secretary of state.

Quiroga said he was grateful for Cardinal Parolin’s call for humanitarian aid, free elections and the release of political prisoners. He also hoped the international community would “insist and persist” on the Vatican’s recommendations.

“The Vatican has enormous moral and political weight and its position — in the name of Cardinal Parolin and the Holy Father — would be a determining factor to reel Venezuela back in toward the path of democracy,” he said.

However, Quiroga added, Maduro’s push for a constituent assembly June 30, comprised mainly of his supporters and aimed at changing the country’s constitution, would “finish off Venezuela and destroy the country.”

Both men also denounced former Spanish Prime Minister Jose Luis Zapatero and Ernesto Samper, former Colombian president and current secretary general of the Union of South American Nations, for their indirect support for Maduro despite their roles as impartial negotiators between the government and the opposition.

At a June 21 meeting on immigration in Cochabamba, Bolivian President Evo Morales — flanked by Zapatero, Samper and former Ecuadorian President Rafael Correa — expressed his support for the Venezuelan government’s actions against protestors.

“Dale duro, Maduro” (“Hit them harder, Maduro”), Morales said as he, Samper and others raised their fists in solidarity. Correa and Zapatero, however, did not raise their fists.

“What meaning does this have when former presidents ask a dictatorship like the one in Venezuela to ‘hit them harder?’ Do they mean ‘keep killing, continue slaughtering youth who are raising their voices in Venezuela?'” Pastrana asked.

The former Colombian president condemned the indirect support of two negotiators following the release of images showing government forces shooting and killing a 22-year-old protester, saying that their support decreases the likelihood of a peaceful solution.

“I think dialogue has ended in Venezuela, that word has been stricken from the Venezuelan dictionary. There is no dialogue, there is no possibility for dialogue and less, when Zapatero, Samper and Correa are holding hands with Evo Morales and shouting, ‘Hit them harder, Maduro,'” he said.

Quiroga added that he was “profoundly saddened” by Morales’ support for Maduro who continues “repressing and killing young people in the streets of Venezuela; continues detaining and judging civilians in military courts; continues to disband the Congress and muzzle the press.”

He also accused Zapatero as acting as “a foreign operative of the Maduro government,” claiming the former Spanish prime minister tried to act on Maduro’s behalf to “scare” opposition members before the parliamentary election that saw them win a two-thirds majority.

“We know his position and that he’s pretending to be a negotiator,” Quiroga said of Zapatero.

Describing the current situation in Venezuela as a “surrealist dystopia,” Quiroga said that calls made by the Vatican supporting democracy must prevail. However, he said, time is running out.

“The risk is that on June 30, Maduro has decided to deliver the final blow of his coup, calling it a vote for a constituent assembly, but in reality, is a final blow for Venezuelan democracy,” he said.

NEXT: God loves, chooses, is faithful to those who are meek, pope says