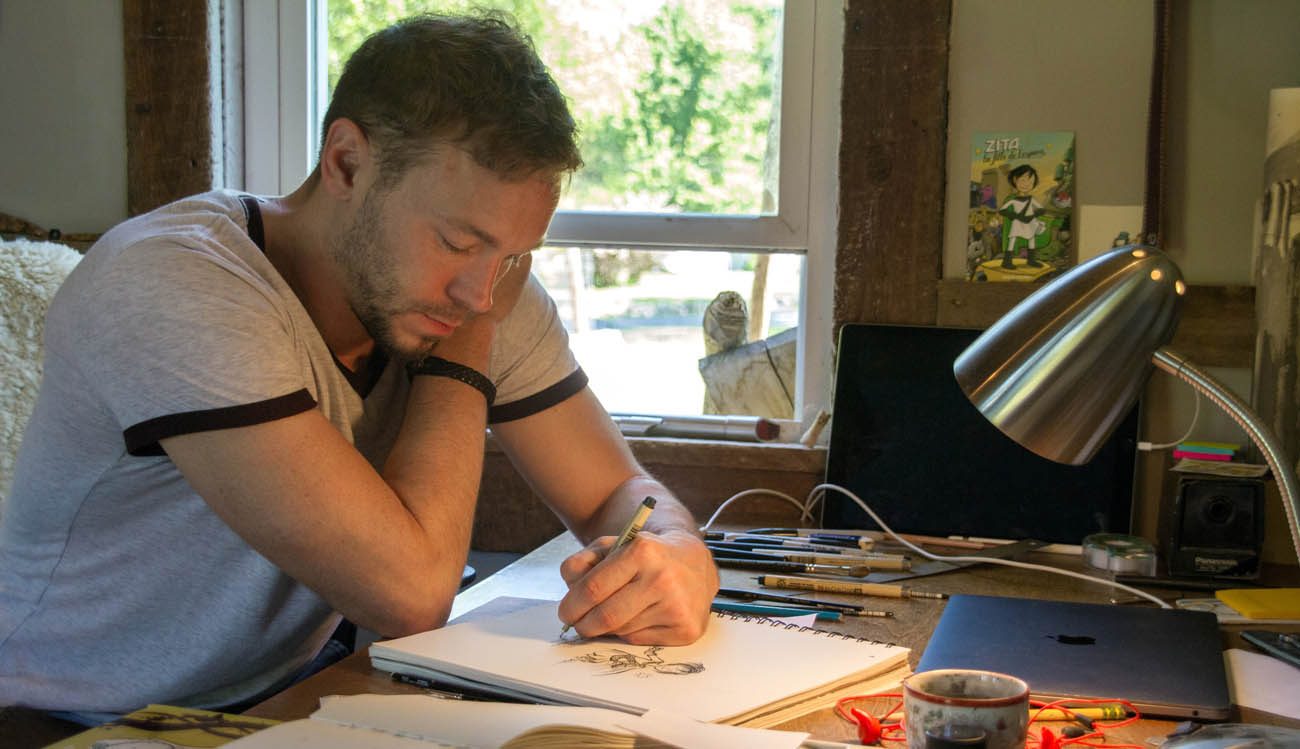 Catholic cartoonist Ben Hatke sketches his character "Zita the Spacegirl" in a studio in his Front Royal, Va., home May 17. His graphic novel series features a character who was named in honor of St. Zita. (CNS photo/Ashleigh Kassock)

FRONT ROYAL, Va. (CNS) — As many parents know, all kids come into the world ready to draw, but as the years pass, each child reaches a point where they make a choice — to draw or not to draw.

It was never a question for comic artist and arrow enthusiast Ben Hatke, who doodled his way through many a grade school and high school class, filling the margins with grand adventures.

His dad was an architect at Purdue University in Indiana and his mom took him and his two sisters to the library regularly. When the young boy discovered newspaper comics such as Calvin and Hobbes, it was love at first sight.

Now, many pounds of pencil lead and paper later, the Christendom College grad and father of five has made a career out of “drawing in class.” For nearly two decades, he has illustrated comics, Seton Home Study School textbooks, children’s books and graphic novels.

The rights to his first graphic novel, “Zita the Spacegirl,” was picked up recently by Fox for a movie and there is hope that one day Hatke’s brave characters will make it to the big screen.

“Zita the Spacegirl” chronicles the adventures of young Zita as she braves the unknown in pursuit of her friend who vanished after pushing a mysterious red button. The story, and subsequent trilogy, became a hit with readers who have become big fans of Hatke’s work. What many of the fans don’t know, however, is that Zita was not Hatke’s idea.

“I feel like I’m always coming clean when I tell this story,” said Hatke, as he sat next to his desk, covered with pens, paper, tiny action figures and a Madonna and Child statue.

“I stole the idea from this cute girl I met at Christendom College,” he told the Arlington Catholic Herald, newspaper of the Diocese of Arlington. “She had done these series of short little comics when she was in high school about this future girl named Zita so I was like, ‘I’m going to develop this character.'”

The admirer from Indiana gave Zita a new outfit and added a green cape. He then presented his crush with a whole Zita comic book.

“This plan of impressing this girl totally worked because she married me and here I am with my five daughters and Anna is still putting up with my crazy artistic ways,” he said.

According to Hatke, Anna chose the name Zita after St. Zita, who was the patroness of the region where Anna’s father grew up in a village in Italy.

“(St. Zita) is a beautiful saint because she is not dramatic. She was a serving girl to a wealthy family and she was just known for being kind to poor people and baking really great bread and giving it away,” Hatke said. “In a time period when many of the saints were priests or religious, she was a lay saint. She just lived a really good life.”

From the very beginning of Hatke’s career, C.S. Lewis and J.R.R. Tolkien have been favorite storytelling influences. But while his style is similar to “The Chronicles of Narnia” by Lewis, Hatke tends to favor the storytelling philosophy of Tolkien, who was against making a story too message driven.

“The most important thing is that you are telling a good story and if you are being honest in your good storytelling then what you think and feel and believe about the world will come out in that story and become apparent.”

One thing that’s become more apparent in Hatke’s work is the influence of his family.

“I had a reason to look back in my stack of books, and it was shocking just how much of my interior life and psychology life comes out, especially in the Jack books,” he said. In his latest graphic novel “Mighty Jack,” released in 2016, the main character’s house is identical to Hatke’s and the similarities do not stop there.

“I grew up with sisters. I now have daughters and Jack also is surrounded by these different feminine characters who are pulling him in different directions,” he explained. “I didn’t even notice I was doing it until I read it in a review and then I was like, ‘Oh man, this is me.'”

Anna and the girls play an important role as his first line of editorial support. The girls like to check on their dad at work and sometimes he will test a joke on them. If it goes over their heads he knows to try again.

One night when he was working on the third Zita book, Hakte felt he finally had a good story and told it to the girls during homemade pizza night.

“I was telling the story and I got three-quarters of the way through and I was like this is getting late, why don’t we eat our dinner and finish up and they were like ‘No! No! Finish the story now!’ And I knew this was working,” Hatke said with a smile. He relies a lot on Anna’s advice. They discuss developing projects when they are driving around town.

There are times, however, that motivation jumps ship and abandons even the best creative minds in the midst of looming deadlines. One of the ways Hatke has learned to get through these dry periods is through small side projects, also known as “goofing-off” or “drawing in class.”

His book “Little Robot” started out as a series of comic strips that he made during a time when he definitely had more important things to do. It turned into a book and won the 2016 Eisner Award for best publication for early readers.

“It has ended up being one of the books that is so important to me and it came because I was just ‘goofing-off,'” he said.

“I’m so thankful and so grateful that I’ve wandered into this position that I really can share stories with people in this way,” he said. “Having a voice and a young audience comes with a lot of responsibility, but also a lot of joy and a lot of excitement. The harder and more contentious times are the more serious the role of the artist is in the world.”

Kassock is multimedia designer at the Arlington Catholic Herald, newspaper of the Diocese of Arlington.