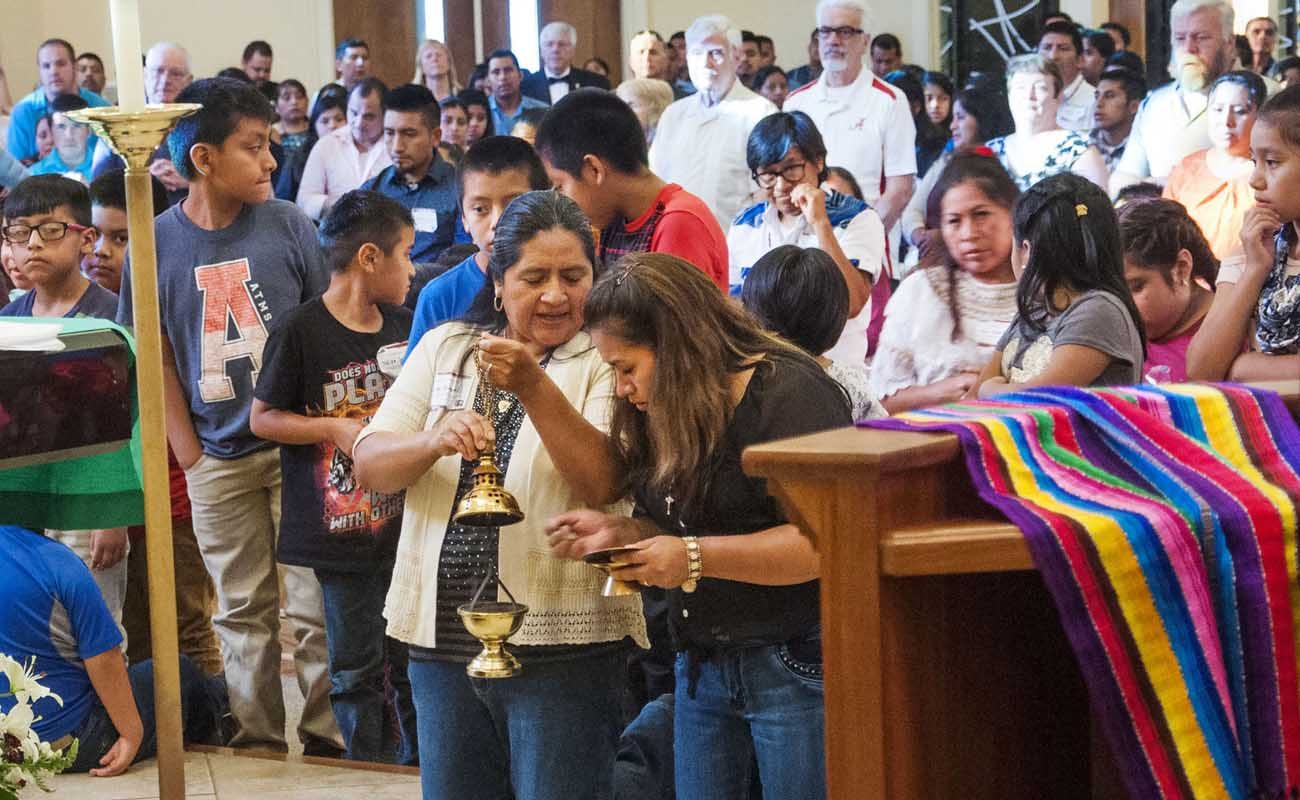 COOKEVILLE, Tenn. (CNS) — They come from different countries and speak a range of indigenous languages and dialects. They are descendants of native peoples who developed one of the most sophisticated cultures in the Western Hemisphere.

They are proud members of the Mayan Catholic diaspora now living all across the United States, and they came together at a conference in Cookeville to celebrate their native culture and Catholic spirituality.

“It was wonderful, spiritually uplifting,” said Juanatano Cano, national consultant on Mayan Catholic ministry for the U.S. Conference of Catholic Bishops. “The Maya community rarely comes together and meets and celebrates our uniqueness,” he said.

Cano and hundreds of other participants met July 7-8 at St. Thomas Aquinas Church in Cookeville, a town about 80 miles east of Nashville, and home to a sizable Mayan Catholic population, as well as a large Hispanic population.

The Pastoral Maya Ministry, part of the USCCB’s Subcommittee on Native American Affairs, has hosted the annual conferences since 1999 to help energize Mayan Catholics and encourage them to serve as bridges between Mayan communities and their local churches. The annual Maya conferences bring together Mayan Catholic leaders from across the country to share ideas and strategies to take home to their communities.

A highlight for many 2017 conference participants was attending Mass celebrated in native Mayan languages, including Q’anjobal, Akateco and Chuj.

“It’s so important because it’s a direct way to connect with God,” said Cano, a native Q’anjobal speaker, told the Tennessee Register, newspaper of the Nashville Diocese. “It can have a very profound impact,” he added. “Some words can’t be translated at all, and things get lost.”

There are currently no priests in the United States who speak native Mayan languages; a priest and a deacon from Guatemala traveled to Tennessee for the conference to celebrate Mass and lead breakout sessions.

The conference for Mayas focused on strengthening Mayan families and preserving their unique culture, with a particular focus on Mayan youth. Gaspar Andres, a recent high school graduate, traveled to the conference from South Carolina with his parents. “I want to learn more about the culture and where my parents came from,” he said.

Andres, whose first language is Akateco, learned English in school and is now learning Spanish. “The way kids grow up they don’t want to learn the language and culture and sometimes the parents don’t explain it really good,” he said. For young adults like him, attending the annual Maya conference can be a powerful reinforcement.

“The most relevant need of the Maya is to transmit the faith toward our children,” said Francisco Hernandez, a parishioner at St. Thomas Aquinas and the local conference chair. “Our children must never forget their roots, our origin and values. We, and our children, need to feel proud for being Mayans.

“As Mayas, we are always in a continuous strive for a better life together with our children to live worthily and for a better future,” Hernandez said.

As the next generations of Mayan families get further assimilated into American culture, they can “lose their sense of identity as Catholics and Maya,” said Cano. One full day of the two-day conference was dedicated to young people, and titled, “New Generation of Mayas Dreaming for a Brighter Future.”

The day opened with a talk by Father Mat Xun Bernabe, a Guatemalan priest, and included sessions on Mayan identity, music and culture, followed by drama and dance performances. Other sessions guided young people through service opportunities and answered questions about higher education.

Present at the conference were young Mayan adults in graduate school, finishing their master’s degrees, or working on their doctorates. “The testimony of these role models spoke for itself to the hundreds of children at the conference,” Cano said.

In Tennessee, in addition to Cookeville, there are Mayan Catholic communities in Shelbyville, McMinnville and Knoxville.

There was a large migration of Mayas to the U.S. in the 1980s during the Guatemalan Civil War, and many began settling in Los Angeles and then spread throughout the country, with the biggest populations now residing in California, Florida, Georgia, Arizona, Illinois and Ohio.

While many Mayas today are proud of both their native and Catholic heritage, the fraught history of the Catholic Church with the indigenous Mayan people cannot be ignored. The first Spanish conquistadors and Christian missionaries to come in contact with the Maya hundreds of years ago nearly destroyed their culture.

However, since the Second Vatican Council, Cano said, “the church has been changing the way it sees indigenous people. There is more appreciation of our culture.” He noted that St. John Paul II encouraged native people to celebrate Mass in their own language, and Pope Francis has apologized for the damage caused by the Catholic Church to native people.

In 1991, in advance of the 500th anniversary of Christopher Columbus’ voyage to America, the USCCB issued a statement acknowledging, “As church, we often have been unconscious and insensitive to the mistreatment of our Native American brothers and sisters and have at times reflected the racism of the dominant culture of which we have been a part.”

For Cano, his native Mayan spirituality cannot be separated from his Catholicism. “Native spirituality for us, it’s how we breathe.”

That includes a deep respect for creation, “living in harmony with our brothers and sisters, the animals, and nature,” he said. “We’re Catholic because we are united with people not our own: black, white, Asian, we cannot isolate ourselves from the rest of society.”