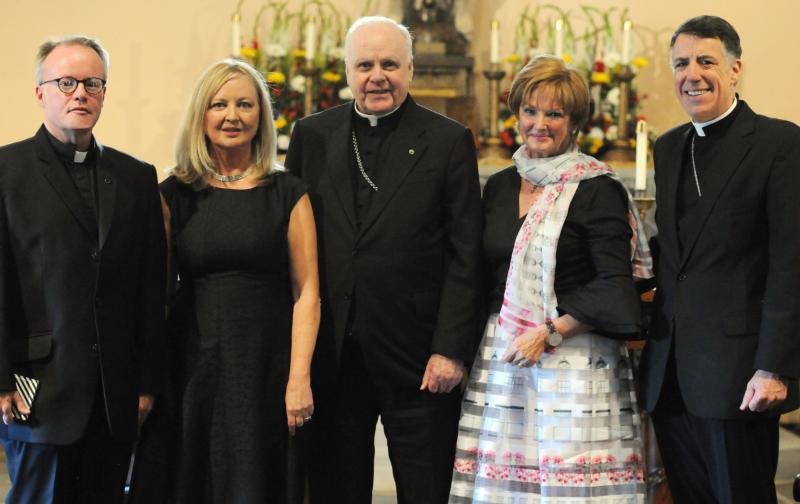 Speakers at an Aug. 8 symposium at St. Brigid Parish in Peapack-Gladstone, N.J., are Father Brian Kiely from New England; Nina Shea of the Center for Religious Freedom at the Hudson Institute; Cardinal Edwin F. O’Brien, grand master of the Knights of the Holy Sepulchre; Amanda Bowman, founder of the Anglosphere Society; and Bishop James F. Checchio of Metuchen, N.J. (CNS photo/Ed Koskey Jr., via The Catholic Spirit)

PEAPACK, N.J. (CNS) — Cardinal Edwin F. O’Brien told Catholics gathered for Mass and a symposium in the Metuchen Diocese that “the enormity of today’s modern Christian genocide is possibly the worst and bloodiest in church history.”

“The situation in Africa, Asia and the Middle East is conveniently sidestepped by the world’s leaders, even those in Washington,” the cardinal said in his homily during the Aug. 8 Mass at St. Brigid Church in Peapack. “We give God thanks for the grace that continues to nourish and strengthen them.”

When Metuchen Bishop James F. Checchio welcomed the cardinal on such “a historic day for the diocese,” he told those assembled that “a Christian is killed every hour, 365 days a year, because of their faith.”

Resplendent in capes and berets, the Knights and Ladies led a procession for the Mass. The group included Lt. Vicki Downey, head of the order’s Eastern Lieutenancy, which has headquarters in New York, Bishop Checchio, retired Bishop Paul G. Bootkoski of Metuchen, St. Brigid pastor Msgr. Edward Puleo, and more than a dozen priests from around the diocese.

In his homily, Cardinal O’Brien quoted from “The Road to Character,” a book by New York Times columnist David Brooks, to explain why people persisted in faith despite persecution and suffering.

“Brooks reminded us, ‘People are beginning to feel a call; they are not masters of the situation, but neither are they helpless. They feel they must participate together in responding to the challenge,'” Cardinal O’Brien said. “Isn’t that precisely what brings us here together, in the face of an enormous, ongoing, senseless and seemingly endless persecution of our suffering believers around the world?”

Christ passed the test of suffering, the cardinal reminded the congregation, and he can help us and those persecuted for the faith in other lands do the same. It is our responsibility to speak out and pray for them.

Acknowledging the dozens of Knights and Ladies of the Holy Sepulchre seated before him, Cardinal O’Brien said, “May the prayers and petitions of our worldwide order echo in every heart. We are in solidarity with these martyrs. May their witness give new life in us to our people of faith.”

The symposium following Mass was sponsored by the Anglosphere Society, a nonprofit membership organization formed in 2012 to promote the defense of religious freedom in the Judeo-Christian tradition.

Shea and Father Kiely held their listeners spellbound as they cited facts and anecdotes on the torture, seizure of private property and destruction of many houses of worship affecting Christians worldwide.

Noting that the symposium was taking place on the third anniversary of the conquering of the Islamic State in Iraq and Syria, Shea said: “It has gone way beyond persecution, it is genocide. It is getting a bit better in this post-ISIS era: the imminent threat of death is gone, but (the Christians) cannot return to their homes.”

Shea reminded the assembly that these Christians could trace the roots of their faith to St. Thomas, but a population of 1.4 million Christians has dispersed and now fewer than 200,000 remain.

“In three years, they have not seen any of the $1.4 billion in aid from the United States,” she said. “We need to put the aid into reconstruction, but it will be tough putting Humpty Dumpty back together again; 82 percent of the Christians have left or died.”

The Knights of Columbus recently pledged $2 million toward reconstruction of a Christian town in Iraq, Shea said, but “safety is dire, and Christian lands are being colonized by Iraqi militia. Whatever we do as Catholics — prayer, petition, vote, speak with our senators, make donations — will help. Today, there are more martyrs than in the Roman period.”

Father Kiely shared his transformation from a Vermont-based parish priest to an advocate for the persecuted, and said, “I was called to spend the rest of my priesthood doing this.” He observed that “the government has a strong hatred of Christians; only the church has been feeding and clothing these people for three years.”

Despite their persecution, Father Kiely said, “they would prefer death or giving up everything to losing their faith. From a spiritual perspective, they give us the intestinal fortitude and guts to stand up for faith.”

“Faith comes from them to us,” the priest continued. “They have a love of God and a deep pride in their heritage. They are the cradle of Christianity. Never let your own faith be weakened by what we have to suffer over here.”

The Anglosphere Society recommended using the acronym PRAY to help Christians worldwide. It stands for pray patiently but with perseverance; read about, research and respond to the needs of the persecuted; advocate and act so others become aware of the plight of persecuted Christians; and say yes by sharing time, talent and treasure on the Christians’ behalf.

“This will not go away,” Father Kiely said grimly. “This is happening in Nigeria, Pakistan, France, Germany … everywhere.”

Leslie is a correspondent for The Catholic Spirit, newspaper of the Diocese of Metuchen.

NEXT: Chicago sisters work to bring peace to streets torn by violence