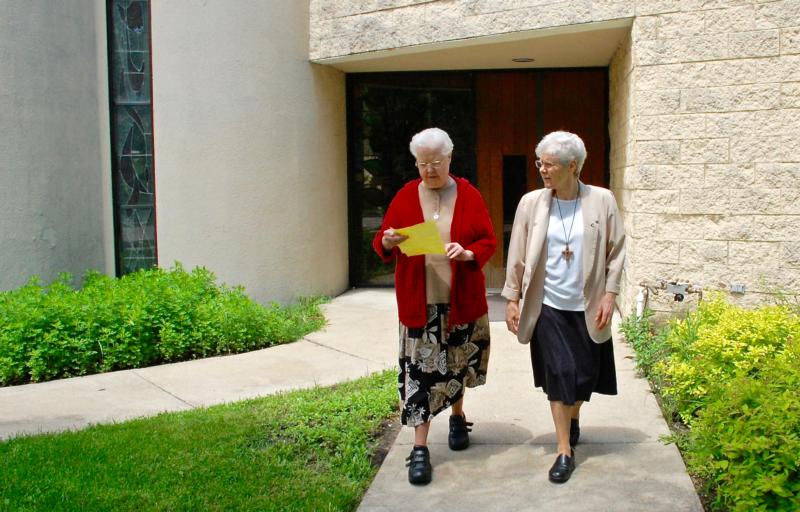 CHICAGO (CNS) — Sisters Joanne Delehanty and Mary Pokorny sit in a church office, talking about the neighborhood they have lived in for nearly 30 years. Their smiles, the room in the old brick structure and the lush trees outside suggest an oasis of peace in a busy city.

But Englewood, eight miles south of downtown Chicago, has seen anything but peace for more than 50 years.

“There’s an entropy that happens, a disorganization that just became the norm in this neighborhood, and that’s a really hard thing to work with,” said Sister Delehanty, who, like Sister Pokorny, is a member of the Dominican Sisters of Springfield.

Englewood, which covers just three square miles, was home to 818 violent crimes — including homicides, robberies and assaults — in the first six months of this year, according to police statistics compiled by the Chicago Tribune. When Chicago Cardinal Blase J. Cupich led a combined peace march and Stations of the Cross on Good Friday this year, he led it through Englewood.

By then, Chicago as a whole was already getting national attention for its number of shootings. At least 755 people had been shot by the time of Cupich’s march in April, the Chicago Tribune reported. In 2016, more than 4,300 people were shot in Chicago and more than 760 were killed, the newspaper said, making it the most violent year in two decades.

Sisters Delehanty and Pokorny are two of the many women religious in Chicago working to bring peace to streets torn by violence. Some do it by running schools, health clinics or social programs. Others do it in smaller ways, concentrating not on changing neighborhoods or even city blocks, but individual lives.

Englewood’s business district at 63rd Street and South Halstead Street once rivaled downtown Chicago, Sister Pokorny said. Then came the “white flight” of the 1950s, during which not only white residents moved away to the suburbs, but businesses followed.

That left empty buildings and few jobs for the African-Americans who thought they were getting a chance to move into a better area. Unemployment and falling property values led to poverty and crime and started a spiral where each factor seemed to worsen the others.

Arthur Eiland, 93, moved into Englewood in 1952 and still has a copy of the letter he received from a confused real estate agent saying he should sell his house: Property values in Englewood were declining because of blacks moving in.

“I guess he couldn’t figure out my race by my last name,” he said.

Values fell again in later decades, when “we also had the flight of our middle-class blacks,” Eiland said, leaving a neighborhood with even more concentrated poverty and more problems.

The population of the community was once 80,000, Eiland said. In 2010, it was 30,000, according to statistics compiled by the Chicago Tribune. Currently, 42 percent of households have incomes below the federal poverty level, which is $24,600 for a family of four, and the unemployment rate is 21 percent, compared to June’s national unemployment rate of 4.4 percent. Nearly one-third of adults in Englewood do not have a high school diploma.

Add in drugs, gangs and the easy availability of guns, and the result is deadly: The neighborhood recorded six homicides in June alone, plus 102 assaults and batteries, 44 robberies, 42 vehicle thefts, 32 prostitution arrests and 43 drug abuse cases, according to police statistics.

The Chicago Benedictines’ St. Scholastica Monastery is in the Rogers Park neighborhood on Chicago’s North Side and has been largely separated from the violence plaguing the West and South sides of the city. But it hasn’t been immune.

In 2014, a man was gunned down across the street from the monastery. In March 2016, an 18-year-old man was shot to death, practically on the monastery’s front steps.

Each time, the sisters organized a peace vigil based on the Take Back the Site program started by women religious in Erie, Pennsylvania.

“Our main purpose was to say no to all violence. Because once a terrible act hits a city, everybody’s heart is touched by it,” said Benedictine Sister Benita Coffey, the congregation’s social justice promoter. “It’s every person’s responsibility to open our hearts and remember that every person that meets us has to find respect and tolerance.”

Sister Coffey said she knows a vigil will not end violence. But she also knows the vigil can lead to what will: relationships.

The sisters and the neighbors have a great relationship with the Chicago Police Department and city officials, she said, but they’re not waiting for leaders to come solve the violence. Instead, they’re trying to foster an atmosphere of trust and acceptance, working to build relationships with and among neighbors so disputes don’t become violent.

In the southwest Chicago neighborhood of Chicago Lawn, the Southwest Organizing Project also is working to restore relationships in the area. Sister Margaret Zalot, a Sister of St. Casimir, has been active in the group since its founding in 1996 to fight predatory lending.

“It’s all connected to safety and the viability of the neighborhood,” Sister Zalot said. “These are the issues that make you comfortable wherever you’re staying. … The housing piece wouldn’t work without the safety piece and the education piece. All these things affect everything.”

Chicago Lawn was once a Lithuanian enclave, predominantly white and predominantly Catholic, and became famous in 1966 when the Rev. Martin Luther King Jr. marched there to demonstrate for open housing, only to be met by an angry mob throwing bricks and rocks, one of which struck him in the head.

In the decades that followed, the neighborhood did become more diverse, with whites leaving for the suburbs and African-Americans and Hispanics moving in, Sister Zalot said.

“As the neighborhood changed, the sisters stayed,” said Paula Staisiunas Schultz, who grew up in the Chicago Lawn neighborhood and is now communications coordinator for the Sisters of St. Casimir. “They were encouraged to move to the western suburbs, but they said, ‘No, we’re here to serve the people of the community, whoever that may be.'”

For decades, the Sisters of St. Casimir ran Holy Cross Hospital and a school and had a large motherhouse. Now, with most of the sisters moved to a nursing home, only seven remain in the complex.

Sinai Health System purchased the hospital in 2012; Holy Cross is now a Catholic hospital within a Jewish health system, and a sister sits on the Sinai board.

The sisters’ school is now a public charter school, and Catholic Charities uses most of the motherhouse. The sisters also started a nonprofit, the Maria Kaupas Center, to run after-school programs.

Jeff Bartow, executive director of the Southwest Organizing Project, said the holistic approach the Sisters of St. Casimir have brought to the group and the neighborhood has been critical.

“They’re on the ground, listening and engaging with people on the issues important to families,” Bartow said. “We have meetings where we always take a little time to do one-on-one conversations with people we don’t know, and it’s not uncommon to see the sisters sitting down with young African-American men and engaging them. The combination of boldness and care on both sides is powerful.”

In Englewood, there are some signs of development with some new and rehabbed houses and a miniature Whole Foods and other stores moving in.

Another island of hope in Englewood is St. Benedict the African Catholic Church, an amalgamation of five churches in the area built in 1989 both to honor the parishioners’ African-American heritage and to be welcoming to everyone.

Sister Delehanty said that despite the shameful treatment African-American Catholics received in white parishes in the 1960s — seated by ushers in the back row, passed over at Communion — they insisted that their new church building be designed to make everyone feel at home. The parish has about 300 individual members.

The parish and neighborhood are home for Sisters Pokorny and Delehanty and neither has plans to leave.

Eiland said neighbors dread the day the two, the only sisters currently working in Englewood, aren’t there anymore. Sister Delehanty is 67 and Sister Pokorny is 80.

“They’re irreplaceable,” he said. “I think their presence makes a big difference.”

NEXT: Venerable church a natural place to view heavens during solar eclipse