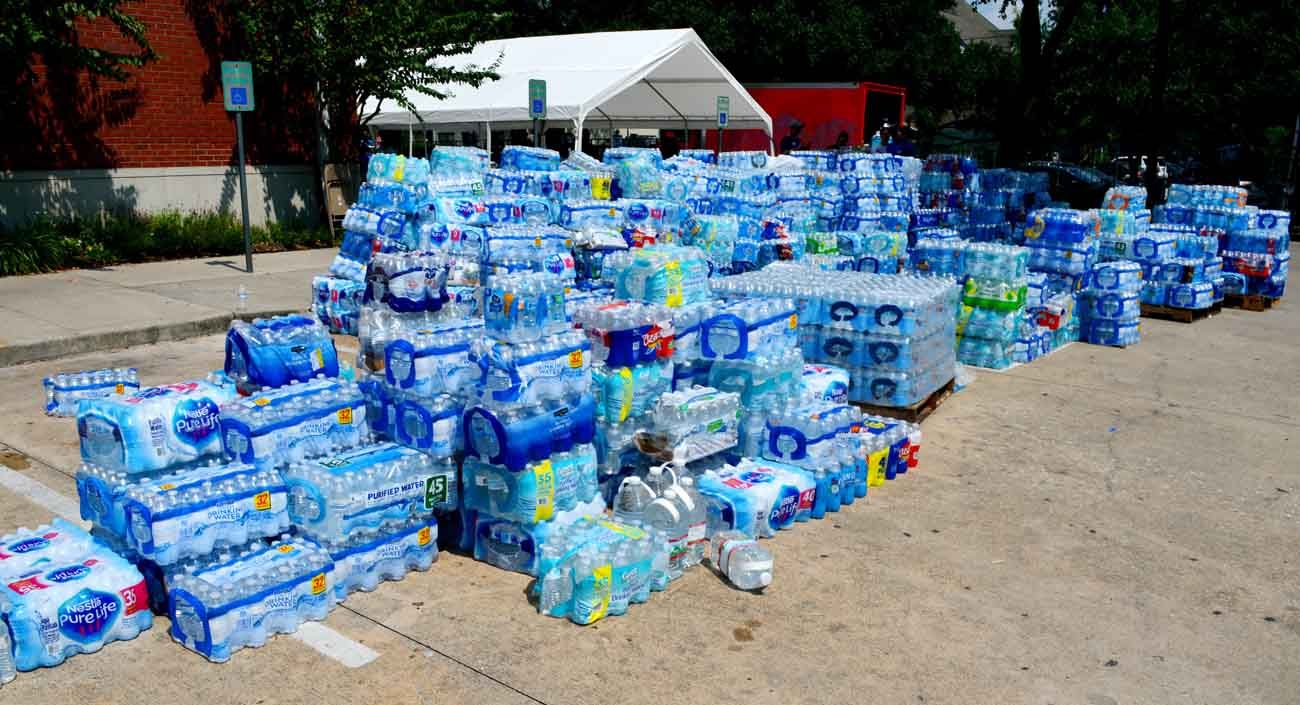 Water bottles are seen at a Catholic Charities center in Houston, Texas, Sept. 3. More than 1,300 people were helped with basic necessities, referrals, emergency funds and gift cards to help them deal with the challenges caused by Hurricane Harvey. (CNS photo/courtesy Catholic Charities)

One hundred percent of the funds raised will go directly to immediate and long-term recovery efforts.

Diocesan Catholic Charities agencies have been hard at work in recovery efforts, trying to address difficulties as they arise.

In Houston, which has received the lion’s share of attention, there have been huge problems finding temporary housing. Apartments are flooded and hotels are not accepting payments from the Federal Emergency Management Agency. On top of that, the city is getting ready to shut down shelters.

In Victoria, relief efforts are just getting started, as Catholic Charities is trying to find a building to convert into a distribution center. Cleaning supplies are still needed to cope with the aftermath of flooding.

While most volunteers want to go to southeast Texas, which suffered significant damage, five counties in the Diocese of Austin were also hit by Harvey. Catholic Charities personnel have gone door-to-door to hotels in Bryan and College Station trying to find displaced people, then connecting them to United Way, as hotels in the area are full due to the college football season. Some businesses are offering paid time off for their employees to go to impacted areas and do volunteer work.

In Corpus Christi, Catholic Charities USA workers are on the ground with people and resources. The biggest challenges they face include trying to find places to store donated supplies and relocating residents with no affordable housing available.

Trucks are a big issue in Beaumont and San Antonio. In Beaumont, six 18-wheelers arrived fully loaded with donations, and up to 100 volunteers stayed until 2 a.m. on Sept. 5 to unload them.

Beaumont’s water supply has remained sketchy since the storm. Water service has not been restored to all areas and those who do have water must boil it first. With flooding still an issue, supply routes change daily and Catholic Charities faces the challenge of getting donations to the right places. They are also setting up food service for volunteers and survivors and looking for vehicles to deliver donations to outlying areas.

NEXT: Catholics turn out to support ‘dreamers’ after DACA rescinded