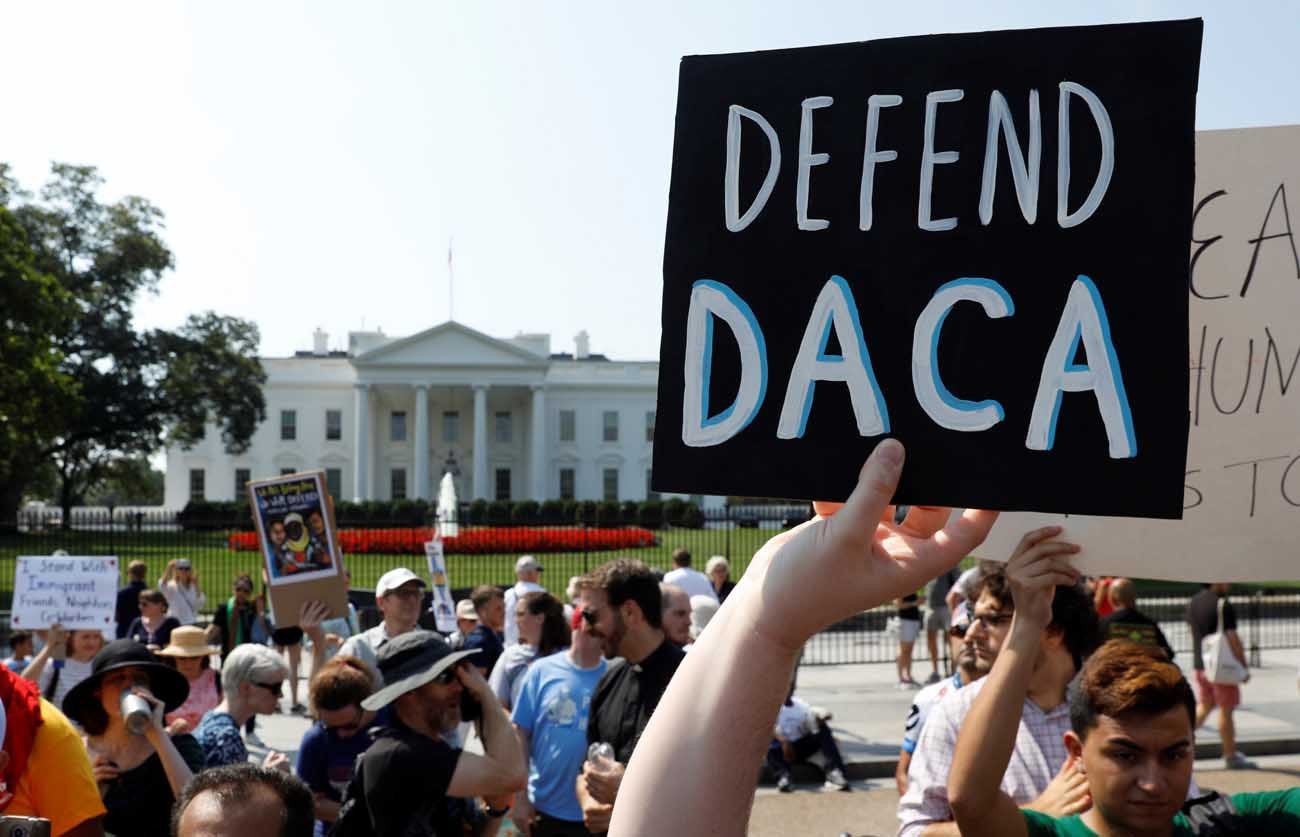 Deferred Action for Childhood Arrivals supporters demonstrate near the White House in Washington Sept. 5. Attorney General Jeff Sessions announced Sept. 5 that the DACA program is "being rescinded" by President Donald Trump, leaving some 800,000 youth, brought illegally to the U.S. as minors, in peril of deportation and of losing permits that allow them to work. (CNS photo/Kevin Lamarque, Reuters)

“In the past, the president stated that the Dreamer story ‘is about the heart,’ yet (the) decision is nothing short of heartless,” said Chicago Cardinal Blase J. Cupich. “The Dreamers are now left in a six-month limbo, during which Congress is supposed to pass comprehensive immigration reform, a feat they have been unable to achieve for a decade,” he said in a Sept. 5 statement.

The rescission of DACA, announced by Attorney General Jeff Sessions, places an estimated 800,000 undocumented immigrants, many of whom were brought to the United States as young children and have known no other home, under threat of deportation and losing permits that allow them to work. From August through December, according to the Department of Homeland Security, the work permits of more than 200,000 DACA recipients will expire and only 55,258 have submitted requests for permit renewals.

The decision to end DACA is “a heartbreaking disappointment,” said Jeanne Atkinson, executive director of the Catholic Legal Immigration Network. She also said her organization rejects and adamantly disagrees with Sessions’ “untested personal opinion that DACA is unconstitutional.”

“Americans have never been a people who punish children for the mistakes of their parents. I am hopeful that we will not begin now,” said Los Angeles Archbishop Jose H. Gomez, chair of the U.S. Conference of Catholic Bishops’ Committee on Migration. “I do not believe this decision represents the best of our national spirit or the consensus of the American people. This decision reflects only the polarization of our political moment.”

Cardinal Daniel N. DiNardo of Galveston-Houston, president of the USCCB, said in a statement with other USCCB leaders: “The Catholic Church has long watched with pride and admiration as DACA youth live out their daily lives with hope and a determination to flourish and contribute to society: continuing to work and provide for their families, continuing to serve in the military, and continuing to receive an education. Now, after months of anxiety and fear about their futures, these brave young people face deportation. This decision is unacceptable and does not reflect who we are as Americans.”

“One can’t hide behind the term ‘legality’ in rescinding DACA,” his statement added. “That is an abandonment of humanity, and abandonment of talented and hopeful young people who are as American as you and I.”

Mercy Sister Aine O’Connor, who stood in front of the White House as the decision was announced, also took issue with Sessions’ remark: “Nothing is compassionate about the failure to enforce immigration laws.”

“We do not see it as a compassionate act. It is a merciless act,” Sister O’Connor told Catholic News Service, adding that it was “an abdication of responsibility by the Trump administration.”

Future plans for her group include lobbying members of Congress to show “the root cause of immigration, which includes American policies that destroy economic stability in other countries.”

The Washington-based Franciscan Action Network’s statement compared Trump to Pontius Pilate: “Like Pilate, President Trump has tried to wash his hands of responsibility when he could have and should have kept DACA in place. God commands his people to care for immigrants and treat them ‘no differently than the natives born among you.'” (Lv 19:34)

The Ohio-based Ignatian Solidarity Network accused Trump of undermining “the dignity of undocumented individuals,” adding, “As people of faith, we are called to uphold the inherent dignity of our immigrant brothers and sisters, to stand with those marginalized by a broken immigration system, and to recognize the gifts and talents that these young people bring to our communities.”

Georgetown University President John J. DeGioia, in a statement on his Facebook page, said he wanted to emphasize Georgetown’s “strongest support for all of our undocumented students. As a nation, we have the capacity and responsibility to work together to provide a permanent legislative solution to ensure the safety and well-being of these young women and men who have — and will — contribute to the future of our country in deeply meaningful ways.”