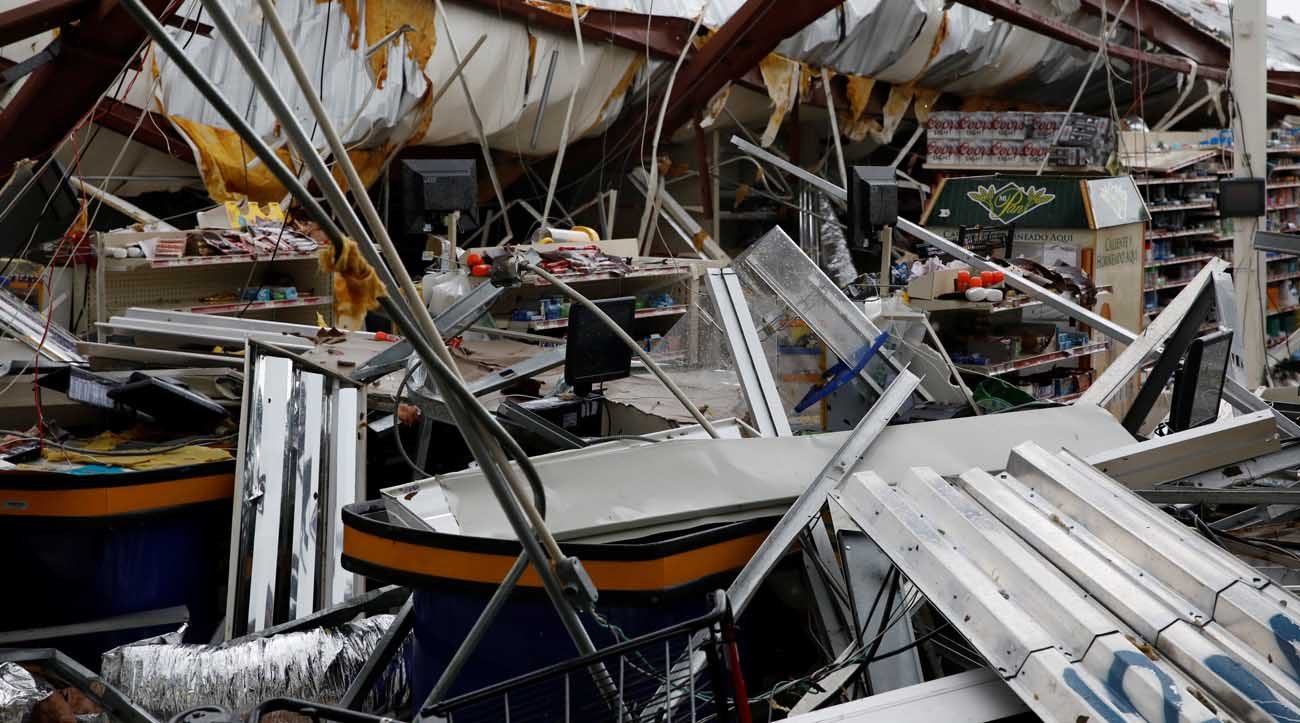 A destroyed supermarket is seen in Guayama, Puerto Rico, Sept. 20 after the area was hit by Hurricane Maria. (CNS photo/Carlos Garcia Rawlins, Reuters)

UPDATED – WASHINGTON (CNS) — Authorities say it may take months for electricity to fully return to Puerto Rico after Hurricane Maria pummeled the island and its infrastructure as it made landfall Sept. 20.

When the hurricane hit the island with winds of up to 155 miles per hour, it tore out cables, roofs from homes and buildings, uprooted palm trees and even bent a cross anchored to a cement post at the entrance of a Jesuit school.

It has been difficult to communicate with the those on the island, said Capuchin Franciscan Father Urbano Vasquez, of the Shrine of the Sacred Heart in Washington, who studied in Puerto Rico and has vast ties to the island. He has been trying to communicate, to no avail, with a community of Poor Clares in Cidra, Puerto Rico, and others he knows on the island, but phone service is hit or miss.

Father Vasquez, however, was able to make contact with a group of seven Capuchin Franciscan friars after the hurricane passed. They took refuge from the storm in Trujillo Alto, about 10 minutes from Old San Juan.

“They were scared because it was the first time they’ve been through something like that,” said Father Vasquez. “They spent the time praying or near the Eucharist” as winds tore through part of the roof near a chapel in the building at Centro Capuchino. Some later sent him videos of the winds whistling through the streets, images taken from a cracked window in an arched entrance door.

The entrance door to the friary caved in, he said, leaving no path for the friars to make their way to the main street. But even if they could get out to the street, authorities have put a curfew in place, afraid citizens could come in contact with fallen cables and other objects that could pose danger on the ground.

The friars told him of the devastation they could see from inside, he said, including fallen palm trees and blocked roads. A parishioner sent him photos of debris, such as torn and battered traffic lights left behind by Maria’s wrath.

“I spent the night praying,” he said, and listening to the radio was the only way to hear what was happening in Puerto Rico and the world. He heard about the earthquake in Mexico and in the middle of his own experience with nature’s wrath, he prayed for the earthquake’s victims.

Water crept in at one point and the friars were doing their best to keep it out of the residence. The only way to live through such an experience is with faith and thinking about safety, he said. Authorities tried to drive the urgent message that Hurricane Maria was no joke and many listened, he said.

“The message was to save life, not the material,” he said. “You can reconstruct structures, but not life.”

Father Reyes, originally from El Salvador, said he has lived through strong earthquakes and their damage sometimes affects a centralized area, but Hurricane Maria tore through an entire island.

As of Sept. 22, at least 15 people were killed in Puerto Rico, and 14 deaths were reported on the island nation of Dominica. Two others were killed in the French territory of Guadeloupe and one on the U.S. Virgin Islands.

Cardinal Daniel N. DiNardo of Galveston-Houston, president of the U.S. Conference of Catholic Bishops, urged Catholics to respond with prayer and other help “in this time of great need for our brothers and sisters in harm’s way — many of whom have been hit repeatedly by the successive hurricanes.”

In a Sept. 22 statement, he noted the catastrophic effects of Hurricane Maria were visited on Puerto Rico and elsewhere in the Caribbean “just as we begin to assess the material and emotional damage of hurricanes Harvey and Irma.”

Cardinal DiNardo said: “Casting aside any temptation to despair, and full of hope in the loving providence of God, we pray that our Father may receive unto his loving presence those who have lost their lives, may he comfort the grieving, and may he fortify the courage and resilience of those whose lives have been uprooted by these disasters. May he extend the might of his right hand and bid the sea be ‘quiet’ and ‘still’ (Mark 4:39).”

Most of Puerto Rico remained without communication and little information had been gathered about conditions. “Our telecommunications system is partially down,” Puerto Rico Gov. Ricardo Rossello told the news agency CNN Sept. 20. “Our energy infrastructure is completely down.”

The Society of Jesus in Puerto Rico posted on a website a message and a photo of a cross bent by the hurricane’s wind, but which is still anchored to a tower at Colegio San Ignacio de Loyola in San Juan, a Jesuit, college-preparatory school that the order operates on the island’s capital city.

“With gratitude, we have learned that the Jesuits, faculty and staff are safe,” said the message from Father Flavio Bravo, Jesuit superior of his order’s Puerto Rico community. “Communication from the island remains limited, so we await news on our school families and members of our parish.”

On the website jesuitscentralsouthern.org, he posted a link for donations to help with recovery efforts, but much like the Capuchins, it’s too early to take in the enormity of damages.

Father Reyes said the damage to Puerto Rico isn’t just material but also psychological for those who lived through the experience of Hurricane Maria and he worries for the most vulnerable in the population.

“This leaves behind a lot of damage,” he told CNS. “But we hope for goodwill … the worries and necessities are great … but we can learn a lot from these experiences, that we have to find the good among the bad. In the middle of all of this, faith strengthens us.”