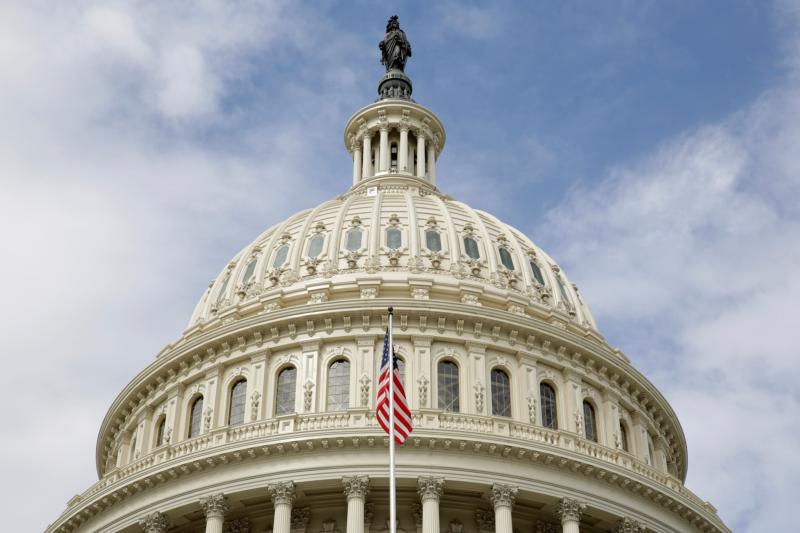 The U.S. flag flies in front of the Capitol dome Sept. 12 in Washington. The latest version of a Republican measure in the Senate to repeal the Affordable Care Act must be amended to protect poor and vulnerable Americans, said the chairmen of four U.S. bishops’ committees.(CNS photo/Joshua Roberts, Reuters)

WASHINGTON (CNS) — The latest version of a Republican measure in the Senate to repeal the Affordable Care Act must be amended to protect poor and vulnerable Americans, said the chairmen of four U.S. bishops’ committees.

“As you consider the Graham-Cassidy legislation as a possible replacement for the Affordable Care Act, we urge you to think of the harm that will be caused to poor and vulnerable people and amend the legislation while retaining its positive features,” the bishops said in a letter to all senators released Sept. 22.

Republican Sens. Lindsey Graham of South Carolina and Bill Cassidy of Louisiana have co-sponsored the legislation.

“Without significant improvement, this bill does not meet the moral criteria for health care reform outlined in our previous letters and must be changed,” they said. That criteria includes respect for life and dignity; honoring conscience rights; access for all; and a high-quality plan that is affordable and comprehensive.

The bishops criticized the measure’s Medicaid “per capita cap” because it puts an “insufferable burden” on poor and vulnerable Americans. They did praise the bill for correcting “a serious flaw” in the ACA by ensuring “no federal funds are used for abortion or go to plans that cover it.” They called on senators to amend the bill to address it flaws but retain the pro-life provisions.

The Graham-Cassidy bill would repeal the ACA and replace it with block grants for the states to spend as they see fit. The block grants’ size, though, would shrink over time and disappear altogether in 2027. The Senate is working under a Sept. 30 deadline to pass the bill.

“The Graham-Cassidy bill includes a Medicaid ‘per capita cap’ that was part of previous bills, which have been rejected,” the bishops wrote. “The Medicaid caps will fundamentally restructure this vital program, which supports the medical needs of those most in need. Over time, these modifications will result in deep funding cuts and lost coverage for millions of people.

“The Senate should only proceed with a full report concerning just how many people will be impacted,” they said. “Our nation must not attempt to address its fiscal concerns by placing an insufferable health care burden on the backs of the poor.”

The bishops said the proposal does “correct a serious flaw” flaw in the ACA by making sure “no federal funds are used for abortion or go to plans that cover it.”

“This improvement is praiseworthy, and it is essential that any improved final bill retain these key provisions which would finally address grave moral problems in our current health care system,” they said. “We also applaud that Graham-Cassidy redirects funds from organizations that provide abortion.”

But they took the bill to task for giving block grants to states “in place of premium tax credits, cost-sharing subsidies and the Medicaid expansion,” saying that arrangement will only harm the poor.

“While flexibility can be good at times, these block grants will result in billions of dollars in reductions for those in health care poverty,” they said. “States already face significant deficits each budget cycle, and these block grants mean dollars intended for low income individuals and families will suddenly face competition from many other state priorities.”

The country “can ill afford to put access to health care for those most in need in jeopardy this way” because, the bishops continued, “the costs to our communities, including public and private organizations at all levels, will be too high.”

“Decisions about the health of our citizens — a concern fundamental to each of us — should not be made in haste simply because an artificial deadline looms,” they said.

“The far-reaching implications of Congress’ actions are too significant for that kind of governance,” the committee chairmen said.

They told senators that “the common good should call you to come together in a bi-partisan way to pass thoughtful legislation that addresses the life, conscience, immigrant access, market stability and affordability problems that now exist.”

“Your constituents, especially those with no voice of their own in this process, deserve no less,” they concluded.

Earlier this year, as Senate Republicans drafted and debated an ACA repeal measure, the U.S. bishops in letters and statements repeatedly urged Congress to craft a bill meeting the moral criteria of respect for life and dignity; honoring conscience rights; access for all; and a high-quality plan that is affordable and comprehensive.

When the Senate failed to get enough votes to pass what was being called a “skinny” repeal to remove parts of the Affordable Care Act in the early hours of July 28, Bishop Dewane in a statement said the “task of reforming the health care system still remains.”

The U.S. bishops have advocated for universal and affordable health care for decades and they supported the general goal of the Affordable Care Act, which was passed in 2010, but the bishops ultimately opposed the law because it expanded the federal role in abortion and failed to expand health care protections to immigrants.