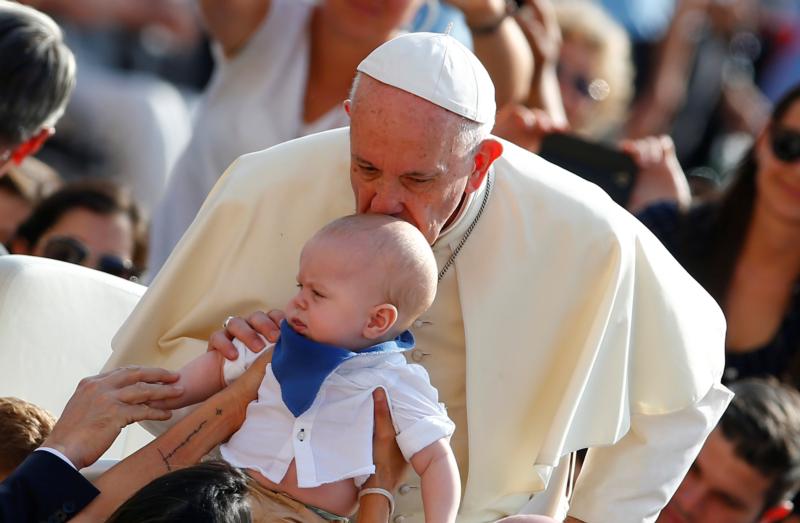 Pope Francis kisses a baby as he arrives for his weekly audience Aug. 30 in St. Peter’s Square at the Vatican. (CNS photo/Tony Gentile, Reuters)

VATICAN CITY (CNS) — By virtue of its very definition, marriage can only be between a man and a woman, Pope Francis said in a new book-length interview.

“We cannot change it. This is the nature of things,” not just in the church, but in human history, he said in a series of interviews with Dominique Wolton, a 70-year-old French sociologist and expert in media and political communication.

When it comes to the true nature of marriage as well as gender, there is “critical confusion at the moment,” the pope said.

When asked about marriage for same-sex couples, the pope said, “Let’s call this ‘civil unions.’ We do not joke around with truth.”

Teaching children that they can choose their gender, he said, also plays a part in fostering such mistakes about the truth or facts of nature.

The pope said he wondered whether these new ideas about gender and marriage were somehow based on a fear of differences, and he encouraged researchers to study the subject.

Pope Francis also said his decision to give all priests permanent permission to grant absolution to those who confess to having procured an abortion was not mean to trivialize this serious and grave sin.

Abortion continues to be “murder of an innocent person. But if there is sin, forgiveness must be facilitated,” he said. So often a woman who never forgets her aborted child “cries for years without having the courage to go see a priest.”

“Do you have any idea the number of people who can finally breathe?” he asked, adding how important it was these women can find the Lord’s forgiveness and never commit this sin again.

Pope Francis said the biggest threat in the world is money. In St. Matthew’s Gospel, when Jesus talked about people’s love and loyalty being torn between two things, he didn’t say it was between “your wife or God,” it was choosing between God or money.

“It’s clear. They are two things opposed to each other,” he said.

When asked why people do not listen to this message even though it has been clearly condemned by the church since the time of the Gospels, the pope said it is because some people prefer to speak only about morality.

“There is a great danger for preachers, lecturers, to fall into mediocrity,” which is condemning only those forms of immorality that fall “below the belt,” he said.

“But the other sins that are the most serious: hatred, envy, pride, vanity, killing another, taking away a life … these are really not talked about that much,” he said.

“The most minor sins are the sins of the flesh,” he said, because the flesh is weak. “The most dangerous sins are those of the mind,” and confessors should spend more time asking if a person prays, reads the Gospel and seeks the Lord.

One temptation the church has always been vulnerable to, the pope said, is being defensive because it is scared.

“Where in the Gospels does the Lord say that we need to seek security? Instead he said, ‘Risk, go ahead, forgive and evangelize.'”

Another temptation, he said, is to seek uniformity with rules, for example, in the debate concerning his apostolic exhortation on the family, “Amoris Laetitia.”

“When I talk about families in difficulty, I say, ‘Welcome, accompany, discern, integrate …’ and then everyone will see the doors open. In reality, what happens is you hear people say, ‘They cannot receive Communion.’ ‘They cannot do this and that.'”

That temptation of the church to emphasize “no, no and no” and what is prohibited is the same “drama Jesus (experienced) with the Pharisees.”

This closed, fundamentalist mindset like Jesus faced is “the battle I lead today with the exhortation.”

Jesus followed “another logic” that went beyond prohibitions as he did not adhere to customs — like not touching lepers and stoning adulterers — that had become like commandments, he said.

Church leaders are used to “frozen norms” and “fixed standards,” but when they ask, “‘Can we give Communion to divorcees?’ I reply, ‘Speak with the divorced man and woman, welcome, accompany, integrate and discern,” which opens a path and a way of communication to lead people to Christ.

Encountering Christ is what leads people onto a path of living a moral life, he said.

When asked about the church’s “just-war” theory, the pope said the issue should be looked into because “no war is just. The only just thing is peace.”

Concerning the persecution of Christians, particularly in the East, and the question of why God would allow such tragedy, the pope said, “I do not know where God is, but I know where man is in this situation. Men make weapons and sell them.”

It is easy for people to question God, he said, but “it is we who commit all this” and allow it to happen; “our humanity is corrupted.”

Speaking about women, the pope said they have an important role in society because they help unify and reconcile people.

Some people mistake women’s demands to be represented and heard in the world with a kind of “machoism in a skirt,” but machoism is a form of “brutality” and does not represent what women should be.

He said with the reform of the Roman Curia, “there will be many women who will have decision-making power,” not just roles as advisers.

While he said he believes he will succeed in opening up more positions to women in the curia, it will be difficult and there will be problems — not because of misogyny, but because of “the problem of power.”

The pope praised those psychoanalysts who are able to be “open to humanism and to dialogue with other sciences,” particularly medicine and homeopathy.

“Those whom I have known have helped me a lot at one point in my life when I needed consultation,” he said, describing how met with a Jewish psychoanalyst once a week for six months when he was 42 “to clear up certain things.”

“She was very good. Very professional as a doctor and psychoanalyst” and “she helped me so much.”

PREVIOUS: ‘Hear the cry of the earth,’ pope and patriarch urge in ecology message

NEXT: Pope to focus on values needed for peace, Colombian archbishop says