Parish cemeteries: A labor, but also a labor of love 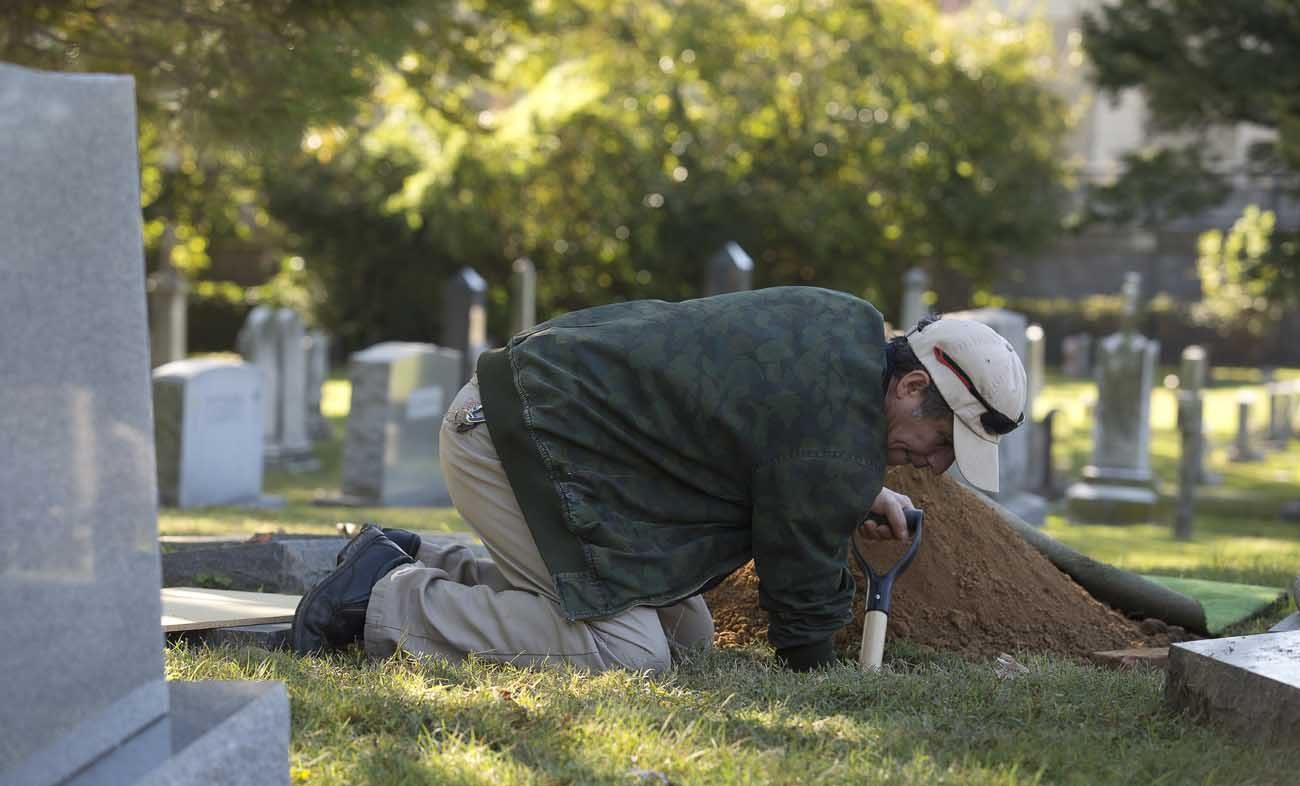 Napolean Mendez, a church employee at St. Mary Catholic Church in Alexandria, Va., prepares an urn burial at the parish's cemetery Oct. 19. Catholics observe the back-to-back feasts of All Saints and All Souls Nov. 1 and Nov. 2. (CNS photo/Tyler Orsburn)

WASHINGTON (CNS) — Often overlooked amid issues of grief and loss in Catholic families after the death of a loved one is that thousands of parishes across the United States have their own parish cemetery.

The Diocese of Madison, Wisconsin, alone has 125 parish cemeteries.

The majority of these cemeteries were established when the parish, then new, was founded in a rural area far from the closest neighboring parish in another village or the center of the diocese. The parish cemetery also was a welcoming presence for Catholics and made burying their loved ones easier in an era when there was still a great degree of suspicion — and separation — between Catholics and non-Catholics.

Those kinds of attitudes have largely dissipated, as have the distances between parishes as cities have grown and swallowed up farmland in their path.

One Wisconsin Catholic official who oversees parish cemeteries calls them “the perfect ministry, because it’s right there, it’s right in the middle of your parish.”

In Detroit, Assumption Grotto Parish on the city’s northeast side has its own cemetery. When the parish was founded in 1832, it was 11 miles from its “mother church,” Ste. Anne de Detroit, established in 1701 as the first French settlers set down roots in Detroit.

In the intervening 185 years since Assumption was established, Detroit grew up and shot past what had been known as “Greinerville,” named after an Assumption Grotto family of French descent that ran a post office and general store. Greiner Road starts across the street from the church and ends at a large Catholic cemetery in Detroit, Mount Olivet.

Suburban development has spread 18 miles northbound past the parish, and the neighborhood surrounding the church has seen better days. It is pockmarked with dilapidated houses and vacant lots where houses once stood.

Yet the parish goes on — and its cemetery, too.

Joe Fisher grew up in the parish, was an altar boy and choir boy, and delivered newspapers on the street behind the 3.5-acre cemetery, where his father is buried. Over the past seven years, he’s taken it upon himself to map out the cemetery, clean the grave markers, take photos of each of them and post them on a website called findagrave.com.

Of the 2,500 people buried there, “there’s just 200 people that I don’t know where” they are, Fisher said. “Before 1950, before vaccinations and stuff, the child mortality rate was pretty high. There are children who would have buried from the flu epidemic. Wooden crosses do not survive 100 years.” He’s also skeptical of a report of a burial at the cemetery in a year that predates the parish’s founding.

What Fisher likes is the Grotto shrine built in 1881 inside the cemetery. “I go there because it makes me feel peaceful,” he said, even though he’ll spend two or three hours cleaning it.

There are still a few plots available, likely returned to the parish, according to Ellen Paluzzi, a parishioner and former parish secretary. “In fact, I’m going to be buried out there,” she said.

Parish cemeteries are “not all that uncommon” in the Midwest, said Grant Emmel, who is charged with keeping tabs on the 125 cemeteries in the Madison Diocese. “It’s the perfect ministry, because it’s right there, it’s right in the middle of your parish.”

Emmel said some parishes have the opportunity to expand their cemeteries when adjacent farmers — who themselves could be parishioners — sell some acreage to the parish.

“The parish cemetery is like a business. You’ve got to approach it with that kind of mindset,” Emmel told Catholic News Service. “You’ve got inventory, you’re selling things, you’ve got customer service, a lot of record-keeping — more so than a general nonprofit might think about. Then you’ve got the whole ministry side. … you start adding that in, there’s a lot to learn, but it’s not overwhelming.”

Emmel added, “People in the parishes, a lot of them have businesses. A lot of them know how to keep a cemetery in operation — or any business, really.”

He explained the dual nature of cemetery as business and ministry: “Like catechesis, like religious education, like the Catholic school, the cemetery is a ministry. In some situations, you say: ‘Listen, the cemetery has to be self-sustaining. It has to pay its own way.’ That’s not an unreasonable thing to say, but at some level, there’s going to be some level of expectation that this is important to us, and it’s worth it to us to expend some of our resources to keep this up and running.

“Now, is it prudent that it’s completely supported by the parish? It’s not an either-or, it’s a both-and,” Emmel continued. “You do it because you are prudent with the use of the funds you’ve been given; you’ve invested in them over time. You get gifts, you get bequests, and you use that to build up a fund that will generate revenue for the cemetery to offset expenses. The majority of the expenses are offset by the revenues generated by past users of the cemetery.”

Joe Sankovich, a former priest, got thrown into parish cemetery ministry as an associate pastor at a suburban Detroit parish, when the pastor left and a new one was not immediately reassigned, leaving him and the other associate to split duties. One of Sankovich’s was the parish cemetery.

“It became my laboratory,” he recalled. Sankovich left the ordained priesthood as a new pastor finally arrived in 1975, “but he asked me to hang on to the cemetery,” he said.

As an ex-priest, Sankovich didn’t have an obvious career to fall back on — “my master’s (degree) was in New Testament,” he said — “but I was doing some counseling with a couple of guys that were based in New York City who had discernment programs for resigned priests.

“It was their recommendation that I look to something in the area of grief and bereavement,” he added.

So he went off to California “to do a weeklong workshop with Elisabeth Kubler-Ross,” the Swiss psychiatrist who had established her “five stages of grief” concept in the 1960s, he told CNS.

“I became good friends with Elisabeth and started thinking about cemeteries. I was in the Catholic Cemetery Conference,” an association for diocesan cemetery directors, “and they were doing absolutely nothing for parish cemeteries” at the time, he added.

It was in Seattle that Archbishop Raymond G. Hunthausen, then head of the archdiocese, challenged him on whether there was any longer a need for Catholic cemeteries. Working with a committee, Sankovich not only agreed that “the theology was bad,” but that it could be improved — and in the committee’s report, showed how.

Archbishop Hunthausen was so impressed with the report, Sankovich said, that he sent it to his fellow bishops.

Sankovich now hangs out his own shingle as a Catholic cemetery consultant, working out of Tucson, Arizona, traveling roughly every 10 out of 14 days. He also produced a 170-page manual for parish cemeteries.

Given his travels, where does Sankovich want to be buried?

NEXT: Two Virginia Catholic cemeteries have history on their side