Two Virginia Catholic cemeteries have history on their side 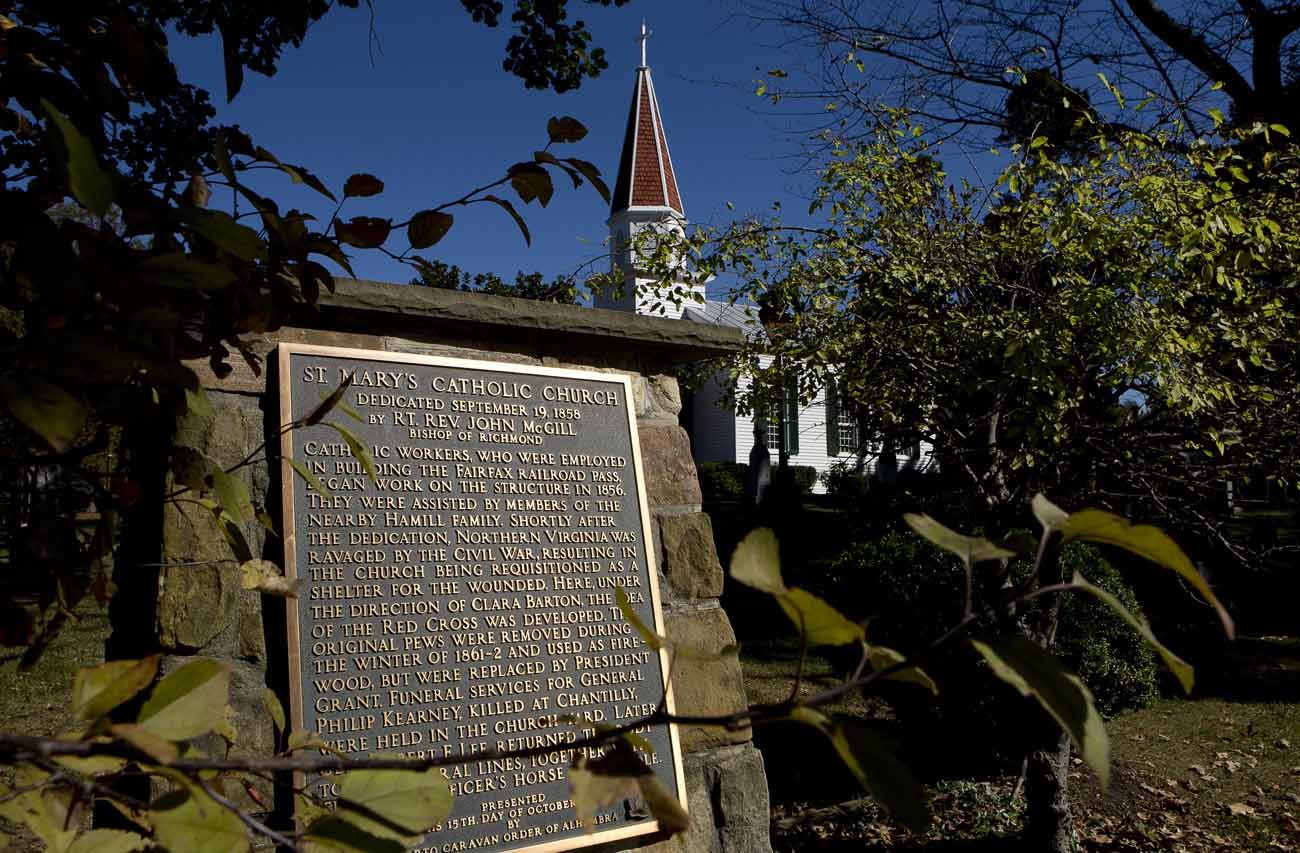 St. Mary of Sorrows Parish's church and cemetery in Fairfax Station, Va., are seen Oct. 18. Catholics observe the back-to-back feasts of All Saints and All Souls Nov. 1 and Nov. 2. (CNS photo/Tyler Orsburn)

UPDATED – ALEXANDRIA, Va. (CNS) — Not only are cemeteries — and Catholic cemeteries in particular — a trove of history about the people who are interred there, but two in the state of Virginia show they can have their own moment in the spotlight.

The cemetery at St. Mary Parish in Alexandria is the oldest Catholic cemetery in the state. The parish, also the state’s oldest, was established in 1795, and the cemetery started operations eight months later, according to Father Edward Hathaway, the pastor.

The church moved about five blocks away in 1810. “Land is crucial. Now we’re just about completely full in our cemetery,” Father Hathaway said. St. Mary is looking for space in the cemetery for a columbarium — a room or building with niches for funeral urns to be stored. “We’re going to urn burials because we don’t have any real estate for burial plots,” said John Harchick, director of facilities for the cemetery, where 6,000 are buried.

In nearby Fairfax County, the cemetery of St. Mary of Sorrows Parish in Fairfax Station also has a bit of history to share.

After the Second Battle of Manassas in the Civil War, also called the Second Battle of Bull Run, Clara Barton visited the site, coming on a train. Within three weeks, even though she was not trained in nursing, Barton had set up a makeshift field hospital in Antietam, Maryland, following the Battle of Antietam. Not long after that, Barton founded the Red Cross.

The land on which the cemetery sits was donated to the Diocese of Richmond — which at that time oversaw all Catholic activity in Virginia and what is now West Virginia — according to John Patrick Murphy, a member of the parish’s cemetery committee.

Alexandria and Fairfax Station are part of the Diocese of Arlington, which was established in 1974 and covers Northern Virginia.

While no soldiers who fought near Fairfax are buried there, 10 soldiers who either were killed or died of disease while stationed elsewhere during the war were interred there for a time, Murphy said. In 1865, their bodies were moved to national cemeteries.

“We have the traditional Labor Day picnic, which is on the church and cemetery grounds,” Murphy told CNS. “We have significant visitation in the cemetery. The church is active. We have Masses at the church. There are weddings, and we have funerals. I myself have a burial plot.”

There may be up to 1,000 plots left at the Fairfax cemetery, which Murphy estimated could last about five years. He said the Diocese of Arlington has purchased land across a road from the cemetery that might be used for an infant cemetery, but there has been no formal pronouncement yet.

Having a cemetery makes a parish “rather unique,” Murphy said. “When you don’t have a cemetery, the past is invisible. You might see a few pictures on the walls, but you don’t have a connection with the past. Here you can see the gravestones. … The history jumps out at you.”

PREVIOUS: Parish cemeteries: A labor, but also a labor of love

NEXT: Catholic schools in Puerto Rico begin reopening after hurricane