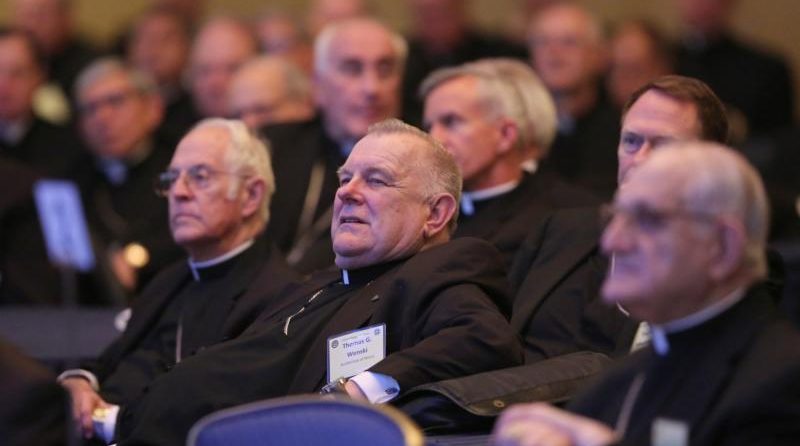 Miami Archbishop Thomas G. Wenski, center, listens during a Nov. 12 presentation in Baltimore on the centenary of the U.S. Conference of Catholic Bishops. It was held the day before the bishops opened their Nov. 13-14 fall general assembly. (CNS photo/Bob Roller)

UPDATED – BALTIMORE (CNS) — At the start of their annual fall assembly in Baltimore Nov. 13, U.S. Catholic bishops faced some big issues — immigration and racism — straight on and zeroed in on how to raise the national level of discussion on these topics starting in the church pews.

They acknowledged the current polarization in the country and divides within the Catholic Church and stressed their responsibility as church leaders to promote immigration reform, educate parishioners on justice issues and listen to those affected by “sins of racism.”

On immigration, Bishop Joe S. Vasquez of Austin, Texas, who is chairman of the Committee on Migration of the U.S. Conference of Catholic Bishops, said there needs to be a “path to legalization and citizenship for the millions of our unauthorized brothers and sisters who are law-abiding, tax-paying and contributing to our society.”

The bishops responded with applause and an agreement by voice vote to issue a statement calling for comprehensive immigration reform.

The bishops were keenly aware that their defense of immigrants was not necessarily the view of the U.S. church at large. For example, Chicago Bishop Blase J. Cupich spoke of dangers of Catholics falling prey to and believing “poisoning rhetoric” about immigrants that demonizes them.

“There’s something wrong in our churches, where the Gospel is proclaimed, and yet people leave our worship services, our Masses on weekends, with that rhetoric still echoing in their hearts,” he said.

Several bishops also brought up the notion of prudential judgment — referring to the view Catholics could take on immigration that differs from the bishops — since it is not a specific matter of church teaching.

The bishops who spoke on the floor didn’t buy that argument and said Catholics can’t use it to push aside the need to care for immigrants. Archbishop Salvatore J. Cordileone of San Francisco took this a step further saying prudential judgment can’t be “taken lightly” on a “justice issue like immigration.”

Archbishop Thomas G. Wenski of Miami said the bishops’ defense of immigrants, as brothers and sisters, not problems, is not only right for immigrants but “for our society as a whole.”

On racism, Bishop George V. Murry of Youngstown, Ohio, head of the bishops’ Ad Hoc Committee Against Racism, said the church must recognize “and frankly acknowledge” its failings. He said the issue has found a “troubling resurgence” in recent years, referring particularly to a white supremacist rally in Charlottesville, Virginia, this year where he said racial hatred was “on full display.”

“Racism isn’t going to be conquered by speech but by actions,” said Archbishop Wilton D. Gregory of Atlanta, adding that this was a watershed moment where the church could play a leadership role.

He spoke about discussions happening at diocesan and parish levels, and several bishops commented about them as well noting that these discussions are not easy, but so necessary to bring about healing.

Other key issues of the day where church leaders are responding include health care, taxes and abortion, mentioned by Cardinal Daniel N. DiNardo of Galveston-Houston in his first address as USCCB president. He took office at the close of last year’s fall assembly.

He explained that the National Catholic War Council, created by the U.S. bishops in 1917 in response to the world refugee crisis that emerged from World War I and the forerunner to the USCCB, was formed to address great national and international needs at a time not unlike today.

The cardinal emphasized other modern challenges such as recent natural disasters and mass shootings.

But the problems of the day should not overwhelm church leaders who should recognize signs of new hope in the church, mentioned by the papal nuncio, Archbishop Christophe Pierre, who addressed the bishops at the start of the meeting and encouraged them to make time for prayer amid “burdens of the office.”

He told them to be adventurous in the “new frontier of faith” and to make a strong effort to accompany young people who often question their faith.

The bishops also heard from the Vatican secretary of state, Cardinal Pietro Parolin, at a Nov. 12 Mass where he was the main celebrant and the homilist, and at a dinner celebrating the USCCB’s 100th anniversary.

The cardinal told the U.S. bishops that the church needs them today to “bring not only material assistance but also the spiritual balm of healing, comfort and hope to new waves of migrants and refugees who come knocking on America’s door.”

He also urged them to follow the pope’s call to accompany the modern church.

Prior to the Mass at the Basilica of the National Shrine of the Assumption of the Blessed Virgin Mary, a few protesters held placards or placed them on the sidewalk, calling on the U.S. bishops to embrace pacifism.

The second public day of meetings did not tackle major societal issues but examined ways the bishops can continue to uphold the Catholic faith from specific wording in the baptismal rite, a review of catechetical materials and a pastoral plan for marriage and family life that will give Catholic couples and families resources to enable them to live out their vocation.

They also voted to move forward the sainthood cause of Nicholas W. Black Elk, a 19th-century Lakota catechist who is said to have introduced hundreds of Lakota people to the Catholic faith.

As part of the business side of the meeting, the bishops elected Archbishop Allen H. Vigneron of Detroit as the next secretary of the U.S. Conference of Catholic Bishops. He’ll take office next November. Votes also were cast for a new chairman of the bishops’ Committee for Religious Liberty and chairmen-elect for the committees on Communications, Cultural Diversity in the Church, Doctrine, National Collections and Pro-Life Activities.

They highlighted past events such as the Convocation of Catholic Leaders in Orlando, Florida, this summer and spoke about tapping into the energy that came from that national gathering at diocesan and parish levels.

They also previewed upcoming events such as the U.S. Catholic Church’s Fifth National Encuentro, or “V Encuentro,” next September in Grapevine, Texas, and World Youth Day Jan. 22-27, 2019, in Panama City.

The bishops identified key issues they are addressing with Congress, including health care, the federal budget and tax reform, and concluded their assembly by mentioning the impact of recent disasters such as hurricanes and wildfires.

Bishop Curtis J. Guillory of Beaumont, Texas, a region hard hit by Hurricane Harvey, said often when tragedies occur, “you just feel very much alone and wonder how you are going to move forward.”

He thanked the bishops for their support, in prayers, phone calls and donations, which he described as a “wonderful sign of solidarity” and sign of unity of our faith. This will be a long and costly recovery, he noted, but added that “people have deep, deep faith.”

PREVIOUS: Persecuted Christians at risk of being forgotten, bishop says

NEXT: Panama archbishop: World Youth Day will invite youth of other faiths