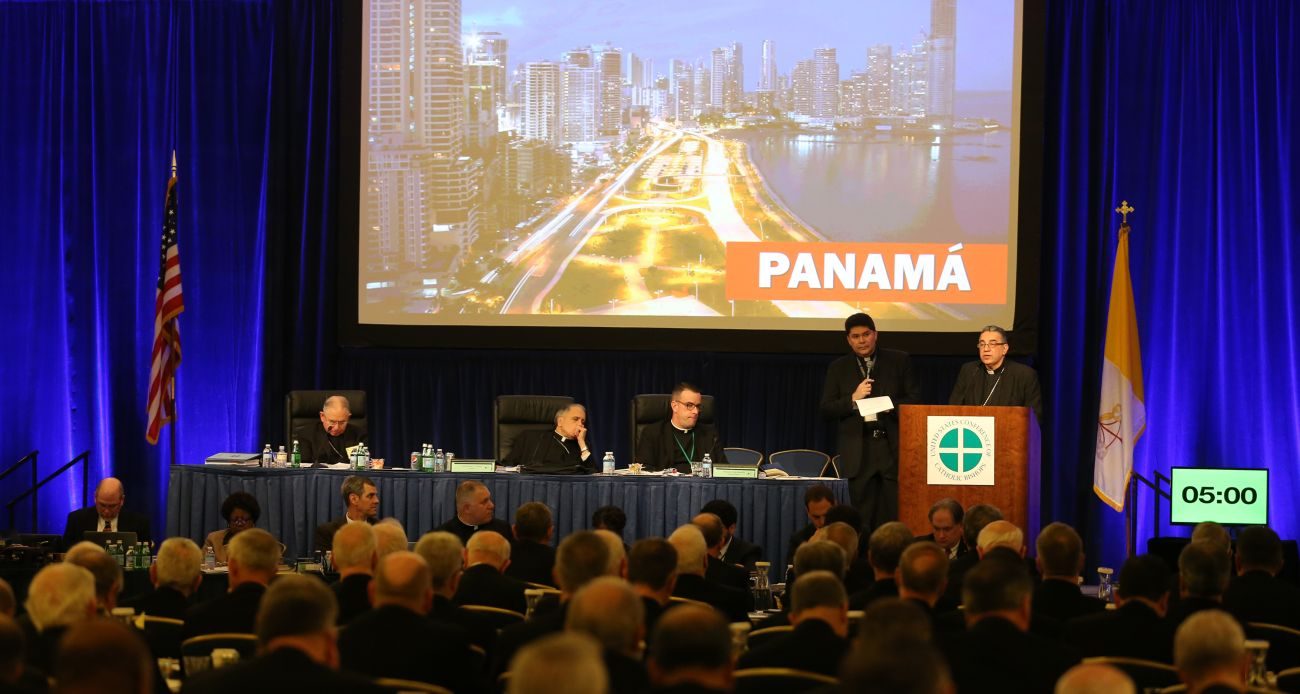 UPDATED – BALTIMORE (CNS) — The Panamanian archbishop helping to organize World Youth Day said the 2019 celebration in his country will invite youth of other faiths to join in.

“We want it to be ecumenical,” said Archbishop Jose Domingo Ulloa Mendieta of Panama in a Nov. 13 interview with Catholic News Service. “We’re working to include youth from other communities of faith to participate.”

Archbishop Ulloa visited Baltimore for the gathering of the U.S. Conference of Catholic Bishops Nov. 13 and 14, where he gave bishops an informational overview of the preparations for World Youth Day.

The international event, started by St. John Paul II in 1985, is a religious celebration that takes place every three years and lasts several days in a chosen country. It is attended by Catholic youth from around the world.

Archbishop Ulloa said Pope Francis told him not to model the event after previous World Youth Day celebrations, but to give the upcoming one a distinct flavor of the realities of Latin America. The event will touch on themes of immigration, which has affected youth, including some who migrate to escape violence in some parts of Central America, on protecting “the common home,” meaning ecological issues, and will feature martyrs and saints of Latin America, including Blessed Oscar Romero, as models for the youth, the archbishop said.

“This was a dream,” Archbishop Ulloa told CNS. “And it came about as an opportunity, thinking of the reality of youth in Central America and the Caribbean, who would never have an opportunity to attend (World Youth Day) elsewhere.”

Because Latin America is home to a variety of ethnic cultures, the celebration will be intercultural, said Archbishop Ulloa. It also will look at the “martyrial” aspect of the church and of the suffering of its people.

The archbishop said the pope told him to “do something from your reality.”

“Who was the pope thinking about?” Archbishop Ulloa asked. “The youth of Central America and their realities as migrants, including some who are driven to delinquency, or are trafficked, of the realities of the marginalization in which they live.”

The pope also asked that the celebration give a special place to Mary and to women.

“We cannot conceive of a Latin American reality without the presence of Mary,” Archbishop Ulloa said.

An important theme tied to Mary was her ability to say “yes” to God, and it will be emphasized as youth are presented with vocational opportunities, and told how Mary as a youth allowed her life to be guided by what God wanted, putting her trust and fate in God’s hands, the archbishop said.

During an evening reception Nov. 13 hosted by Bishop Frank J. Caggiano of Bridgeport, Connecticut, who is the episcopal liaison to World Youth Day, the Panamanian archbishop encouraged youth present to visit his country, and told them to “put the church in a crisis.”

That meant, he later said, that as youth, they shouldn’t be afraid to bring new ideas to the church, to pose to their elders how to do something different, to shake things up and “breathe something new” into the church.

In his address to the bishops Nov. 13, Archbishop Ulloa said World Youth Day, set for Jan. 22-27, 2019, will take place during the time of the best weather in the country. The archbishop spoke in Spanish, but his remarks were translated in English.

The archbishop said World Youth Day pilgrims would encounter a church that is alive and a country that has a big heart.

He said the number of participants could be about 300,000. Lodging for participants will be in local schools, gyms, community and retreat centers, and hotels. The event would follow the typical World Youth Day schedule with catechesis and an opportunity to be with the pope for the Way of the Cross, a vigil Mass and a closing Mass.

Archbishop Ulloa described the event as “an opportunity where young people can experience the grace and the love of God.”

In his closing words, encouraging bishops to attend World Youth Day, the archbishop said: “We become older if we’re not with the young people.”

NEXT: Sainthood cause of Lakota catechist moves forward