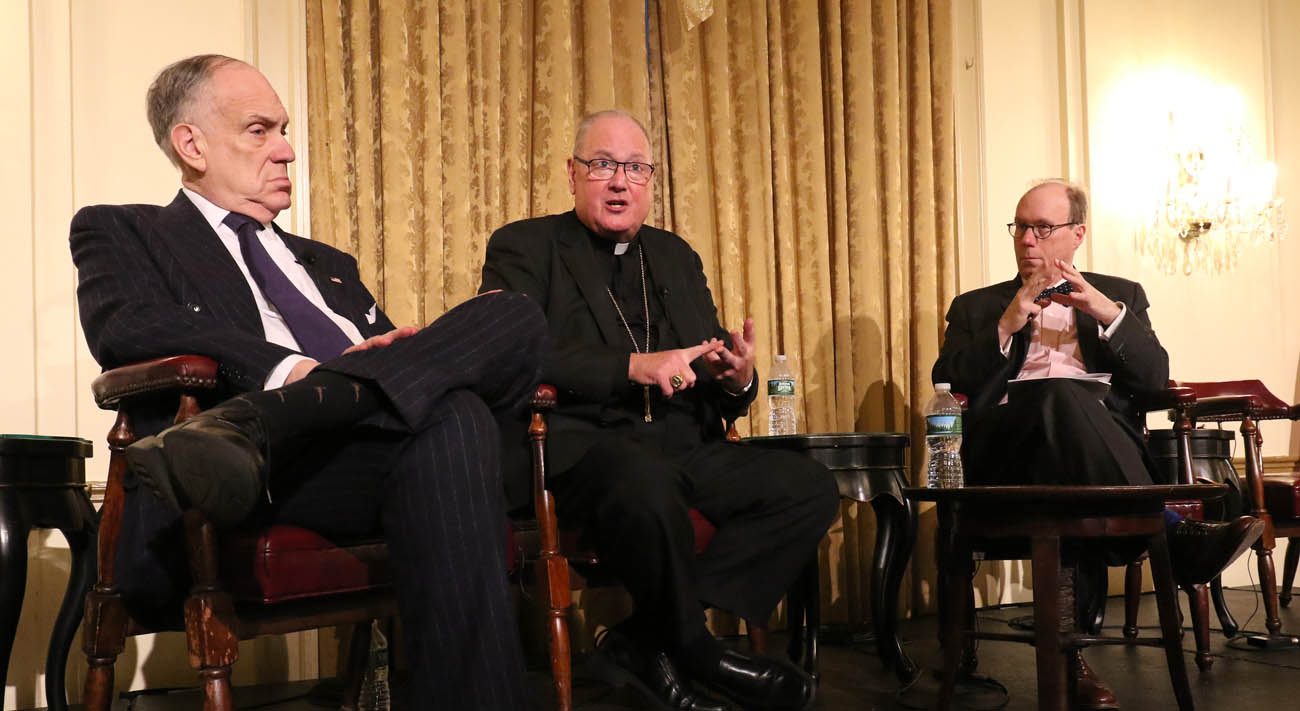 New York Cardinal Timothy M. Dolan speaks during a conference Dec. 5 in New York City focusing on preserving Christian communities in the Middle East. Looking on are Ronald Lauder, left, president of the World Jewish Congress, and Roger Kimball, editor and publisher of The New Criterion. (CNS photo/Gregory A. Shemitz)

NEW YORK (CNS) — Cardinal Timothy M. Dolan of New York said Catholics should learn from their “Jewish elder brothers and sisters” how best to advocate with elected leaders to alleviate the plight of persecuted Christians in the Middle East.

“It took us a while to answer the alarm clock” on the issue, but Catholics have responded generously with aid, awareness and prayers, he told participants at a Dec. 5 conference on “Preserving Christian Communities in the Middle East and Curbing Anti-Semitism.”

Cardinal Dolan and other speakers said indifference, secularism and a societal reluctance to call evil by its real name contribute to lack of large-scale outrage and political action to protect Christians and help them live safely in their homelands.

“More than 1 million Christians have been killed in the Middle East and Africa since this started, but it is poorly covered in the media and there is no organization like the World Jewish Congress to stand up and fight,” he said.

“If a Palestinian kills a Jew and a Jew kills a Palestinian, it’s front-page news, but tens of thousands of Christians are killed and there is nothing. People don’t listen. We need to communicate better,” Lauder said. “If someone even slightly attacks Christians, we have to stand up and say, “You can’t do that! Enough is enough!'”

Lauder said Catholics don’t use their “political might to do what has to be done. He noted Catholics comprise 24 percent of the U.S. population and Jews make up only 2 percent, but they make their voices heard.

“You should say to your Congress people and senators, ‘If you don’t represent us and talk about these issues, we might not vote for you,'” he remarked.

Cardinal Dolan said the church should do a better job of advocating with nations who have consulates and U.N. representatives in New York City. “I need to make it my business to pester them when there’s an example of persecution or negligence of vigilance over the protection of religious freedom.”

Governments have a grave responsibility to protect the freedom that comes from the Creator and cannot use expulsion of religious minorities as a political methodology, he said.

It is important to describe the persecution of Christians as genocide and to refrain from “circumlocution” and “politically correct” terminology to obscure the current situation, Cardinal Dolan said.

If society’s response to the persecution and displacement of Christians is empty and ineffective, it’s because we’ve been trained not to take religion seriously and not let it affect our public actions, Cardinal Dolan said.

The persecution is real; it is the result of sin; it reflects the power of darkness and is best fought spiritually, he said.

Roger Kimball, editor and publisher of The New Criterion, a monthly journal, said the “Islamic State takes Christian symbols more seriously than Christians do and the only real way we will solve the problem is if Christians reanimate the symbols” in their own lives.

Cardinal Dolan said the Catholic Church has made a successful effort to raise awareness about the plight of persecuted Christians. “It has become a “kitchen table topic” in Catholic homes, has a consistent place in prayers at Catholic parishes, and is well-documented in Catholic periodicals, he said.

Church organizations have taken a leading role to resettle Christians and help them rebuild as they return to their homes. “They don’t want to come here. They want to go back to their homes,” he said.

Cardinal Dolan cited the Knights of Columbus, Catholic Near East Welfare Association, Aid to the Church in Need, Knights of Malta and the Knights and Ladies of the Holy Sepulchre for timely, generous and effective assistance.

Drawing on the World Jewish Congress experience in Eastern Europe, Lauder said, “Rebuilding churches and bringing in the right priests says, ‘We’re here and we’re not going away.'” Re-establishing schools is important, because “education is the greatest thing we have against terrorism,” he said.

Cardinal Dolan lauded a decision by the Trump administration to channel a portion of government humanitarian aid to the Middle East through existing local Catholic and Christian organizations. “They don’t have to parachute in. They are already on the front line and a part of the terrain.”

Most U.S. aid has been distributed through U.N. refugee camps. Large numbers of Christians have avoided the camps because they are afraid they will be targeted by majority groups in the camps.

One area that doesn’t seem to be working as part of the resolution of the current conflict is “dialogue with moderate Islam,” Cardinal Dolan said.

Although he remains optimistic and believes “at its core, there are many noble things about Islam,” he said, “the dialogue we long for as a united effort to condemn terrorists and confront them doesn’t seem to be catching on.” He said this could be because moderates may “fear what happens if they speak up.”

The daylong event, held at the 3 West Club in Manhattan, was the second annual conference on the theme organized by the Anglosphere Society, a nonprofit membership organization that promotes the traditional values of English-speaking peoples.