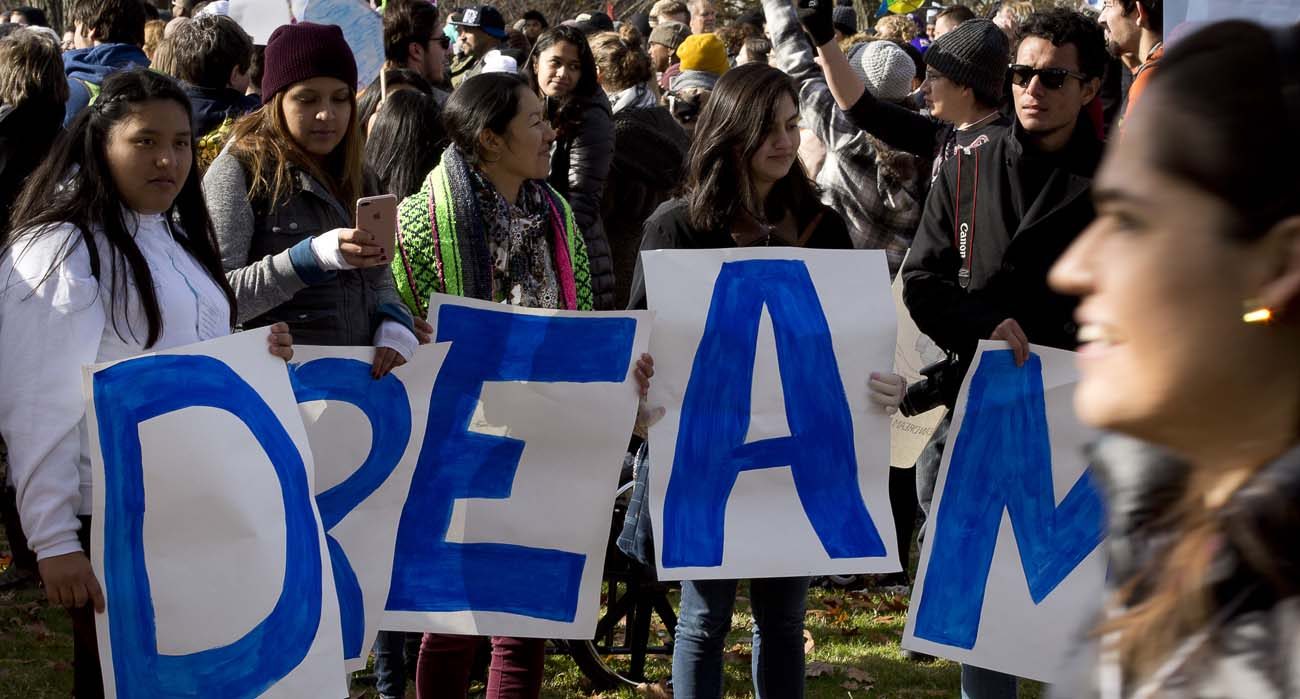 Supporters of comprehensive immigration reform, including a path to citizenship for Dreamers, gather near the U.S. Capitol in Washington Dec. 6. (CNS photo/Tyler Orsburn)

WASHINGTON (CNS) — Young adults waiting to hear whether lawmakers will grant them the opportunity to stay in the country legally said they don’t want Congress to offer an immigration deal that will help them but in turn produce fear and mass deportation among their parents and neighbors who are in the country illegally.

“What good is it for me to have a pathway to citizenship if I can’t have my parents, my friends, my loved ones … not with me? For us, family is the core of everything. I can’t imagine being in the U.S. without them,” said Laura Peniche, of Colorado, who benefited from the Deferred Action for Childhood Arrivals program, or DACA, which in 2012 began offering temporary reprieve from deportation and some legal documentation to youth brought to the country illegally as children, as long as they met certain criteria.

Some 800,000 benefited from the program created by executive order by then-U.S. President Barack Obama, a policy rescinded in September by President Donald Trump, who then asked lawmakers to find a permanent solution before the program ends March 5.

Peniche and other DACA recipients from around the county took part in a Jan. 25 telephone briefing sponsored by the PICO National Network, a coalition of faith-based groups.

They spoke of their fears, of frustration with lawmakers, of their peers’ trauma and depression, and the uncertainty of what they’ll do if Congress fails to pass any legislation to offer them relief when the program expires. But their biggest worry is over what lawmakers will come up with, who will be sacrificed, they say, as Republicans and Democrats bargain.

The Trump administration proposed Jan. 25 a path to citizenship for an estimated 1.8 million young immigrants who entered the country without legal permission. In turn, the administration asked for $25 billion for border security and immigration enforcement, an end to the diversity or lottery visa program, and severely curtailing family visas.

Some DACA recipients expressed concerns that they were being used as pawns and, in effect, are being asked to choose between citizenship and being responsible for heavy militarization of the border, as well as the safety of their parents, extended family and neighbors who will be at greater risk of being removed from the country if more immigration agents are deployed.

“Nobody should be given that option,” said Carlos Corral, a DACA recipient from New Mexico, who said abundant immigration checkpoints in his region make him worry that the most average of errands could separate him from his mother, who is not in the country legally.

“I’m in constant fear that Mom will one day decide to go shopping to the grocery store and run into one of those checkpoints and that’ll be it. I’ll lose her, just like that,” Corral said. “It does happen and it’s our reality … that’s not a way of life. I feel like we’re in a cage.”

The building of a bigger wall along the border with Mexico and the further militarization of the border will affect the way family, friends and communities live, he said. For the young adults to be used as bargaining chips in a deal that would make the lives of others even more difficult is abhorrent, he said.

“We shouldn’t be pushed to choose freedom over family because it’s immoral. Nothing is more valuable than our family,” Corral said.

Kevin Appleby, senior director of international migration policy at the Center for Migration Studies in New York, said the White House proposal goes against Catholic values because it harms the family and goes against church teaching that calls on Christians to welcome the stranger.

“The White House proposal decimates the family immigration system and removes protections from asylum-seekers and unaccompanied children, among other harsh provisions,” Appleby told Catholic News Service. “The bishops and the Catholic community should be alarmed with the proposal, as it undermines core Catholic values of family unity and the protection of persons from persecution.”

There already is much damage done, said Peniche, and she sees the toll stress has taken in other DACA recipients dealing with depression over the uncertainty, but also in family members uncertain about a future with their family in the U.S.

“I was having a hard time being a lifeline for my mom when she kept talking about feeling less valuable than everybody else, and seeing how she lost hope for this country, for life in general, due to the system that’s surrounding us,” she said. “We’ve been suffering in silence for too long and that’s killing our community.”

Some expressed disappointment with Democrats in Congress and the message they sent out during budget negotiations with Republicans that led to a brief government shutdown in January, which was in part spurred by immigration dealings.

Others called on supporters to avoid patronizing companies and businesses that support mass deportation or anti-immigrant policies. They also said there should only be one thing that’s up for negotiation — and it’s not the welfare of families and friends. It’s the taxes the government has collected over the years from immigrants in the country illegally and for which these immigrants have never claimed in tax refunds. The country can keep that and in exchange allow them to live in peace, they said.

DACA recipient Lorena Lara, an organizer with the grass-roots organization Faith in the Valley in California, said family should not be negotiated under any circumstance and that there should be no negotiation with a system that seeks to separate human beings from their loved ones.

“We need to fight to change that system,” she said.