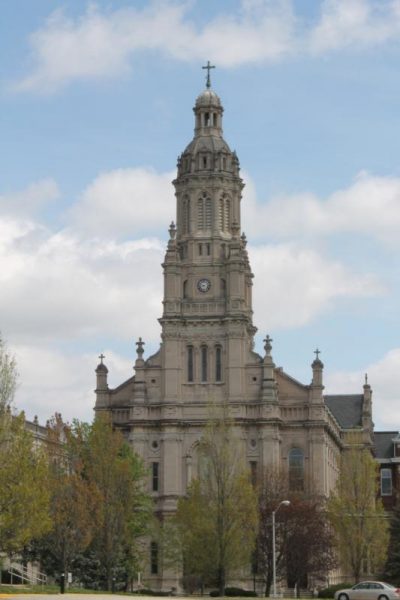 The Church of the Immaculate Conception in St. Mary-of-the-Woods, Ind., is seen in this undated photo. (CNS photo/Mike Krokos, The Criterion)

“It was like living in a fairy-tale setting, with a marble staircase to ascend to my room” in Le Fer Residence Hall, said the 1993 alumna. “I always took great pride in the castlelike buildings and the surrounding natural beauty of the trees and the religious shrines on campus.”

Providence Sister Dawn Tomaszewski, a 1974 alumna, agrees. She is now general superior of the Sisters of Providence of St. Mary-of-the-Woods, who founded the college almost 180 years ago.

“One of the things people say all the time is, ‘This (property) is a hidden jewel,'” she noted about both the campus and the sisters’ grounds. “But we don’t want it to be hidden.”

Now that jewel is being held up for all to see — on a national level. Last fall, the grounds of the college and of the Sisters of Providence were listed on the National Register of Historic Places as the St. Mary-of-the-Woods National Historic District.

The designation recognizes the national architectural, educational and historic contribution of the college and religious congregation, both founded in 1840.

“The status is not just about the architecture,” Sister Dawn told The Criterion, newspaper of the Archdiocese of Indianapolis. “The place itself (must be) historic because of the people or the events that happened there.

Since their founding, the Providence sisters established numerous parish schools in Indiana and Illinois, and went on to minister throughout the United States and in China, Peru and Taiwan.

The newly designated St. Mary-of-the-Woods National Historic District is a far cry from the landscape encountered by Mother Theodore and her five companions when they arrived from France at the then-frontier town of St. Mary-of-the-Woods, a few miles west of Terre Haute, on Oct. 22, 1840.

“What was our astonishment to find ourselves still in the midst of the forest, no village, not even a house in sight,” wrote Indiana’s only saint in her diary.

The district includes well-known structures such as the Church of the Immaculate Conception and Le Fer Residence Hall. It also includes sites such as the sisters’ cemetery, and objects such as an outdoor Stations of the Cross.

Most surprising to Sister Dawn was the inclusion of buildings purely practical in use, yet still built in classic architectural styles of the late 1800s and early 1900s: the water plant, the industrial garage, the fan house to cool the boilers and even the horse stables.

“More surprising to me was Hullman (Science) Hall and the (Rooney) library, (both) constructed in the 1960s,” said Dottie King, president of St. Mary-of-the-Woods College. The experts with the National Register of Historic Places “were very interested in those buildings. They said for the 1960s era these are fascinating, perfect examples of mid-century modern (architecture).”

The effort for the designation began in 2013 as the college prepared to celebrate the 100th anniversary of two of its buildings.

In researching the structures, said King, “we learned how much determination was put into some of the architecture. We started speaking with a local representative of the Indiana (Landmarks western regional office), and it grew from there.”

In 2015, the Sisters of Providence joined the college in seeking designation of their own grounds as a historic district. The sisters and college officials later combined the two proposals.

“It was fun to work on this (effort) together,” said King, adding that “while we’re more separate in terms of governance and finance, we still share the mission of Mother Theodore and the mission of all those who came after her.”

Helping to gather the history of the buildings for the designation process was Providence Sister Marie Grace Molloy, 85, who professed her first vows with the congregation in 1953. She now lives on the motherhouse grounds and works in the sisters’ archives.

Working in the archives “just gives you a sense of history, of what has evolved here,” she said. “You can go back and find out the whole situation of the times, who helped, just how much it cost to build some of the edifices.”

Rahman, who with her husband and their son is a member of St. Patrick Parish in Terre Haute, remained in the area after graduating from St. Mary-of-the-Woods College.

“It was important to me to share this special place with my son, so ever since he was an infant, I have taken him to the campus,” she said.

“Now that he’s older, I am especially grateful and proud I have a place to take him, just minutes from our house, where he can see firsthand world-class architecture that is a national and historic treasure, and not only that, but to walk in the footsteps of a saint.”

Those footsteps are part of what make St. Mary-of-the-Woods “sacred,” she noted. “With the new historical designation, I pray that more people will come visit the campus and these holy sites, and in doing so, encounter Christ.”

Editor’s Note: For a list of the buildings designated as a part of the St. Mary-of-the-Woods National Historic District, click here.