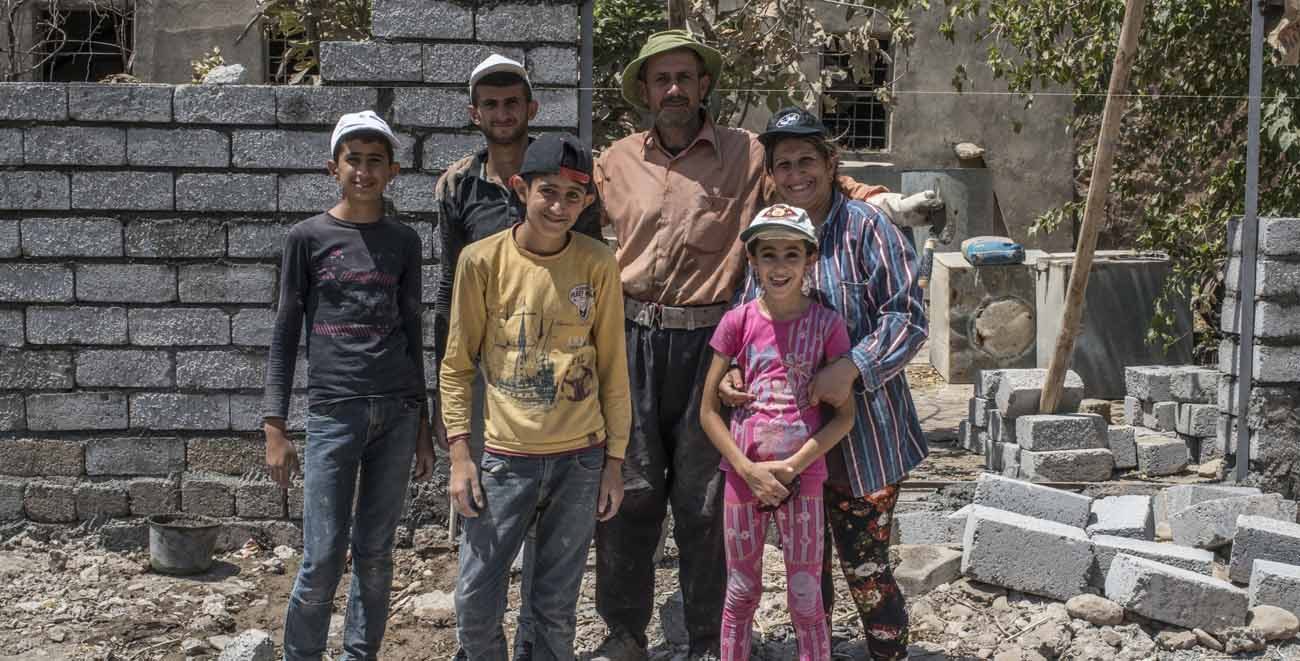 A Catholic family working to repair their family home damaged by Islamic State militants poses in 2017 in the Christian town of Karamdes, Iraq. St. John the Baptist Parish Knights of Columbus Council 10305 in Fort Calhoun, Neb., is supporting an effort to help Christians in Syria and Iraq who were driven from their homes by terrorism, genocide and war. (CNS photo/Martyn Aim, courtesy Knights of Columbus)

OMAHA, Neb. (CNS) — From a town of just over 900 people, a Knights of Columbus council and its 162 members hope to have a big impact halfway around the world.

They are supporting an effort to help Christians in Syria and Iraq who were driven from their homes by terrorism, genocide and war.

Titled “Rebuilding the Cradle of Christianity,” the initiative is the local version of a national Knights of Columbus effort to help Christians who fled to escape the terrorist group Islamic State and the devastation of their towns, with many now living in other countries or in refugee camps.

St. John the Baptist Parish Knights of Columbus Council 10305 in Fort Calhoun took up the cause of funding construction of hundreds of homes in the town of Karamdes, a mostly Christian town on the Ninevah Plain in Iraq.

This will allow residents to return and rebuild their lives, said Mike Conrad, a supreme director on the national board and a member of the parish who is co-coordinator of the local effort.

“This is the biggest project our council has ever been involved with,” said Jim Hubschman, the council’s grand knight and project co-coordinator. “We’re very committed to helping these people who want to go back to their homelands.”

Karamdes, southeast of Mosul, fell to ISIS as it advanced across northern Iraq in August 2014. The town was liberated in late 2016, and residents have gradually been returning.

But of the town’s nearly 800 homes, 464 were burned, 97 were destroyed by bombs and the rest were damaged or vandalized, according to a report by Open Doors, an international ministry serving persecuted Christians and churches around the world. Churches and sacred images also were destroyed or vandalized.

As part of their efforts, the Fort Calhoun Knights planned two fundraising events in Omaha March 9 and 10 featuring Syriac Catholic Bishop Barnaba Yousif Habash, along with Gabriel Jabbour, a Syrian refugee, and his daughter and translator Rula Jabbour. 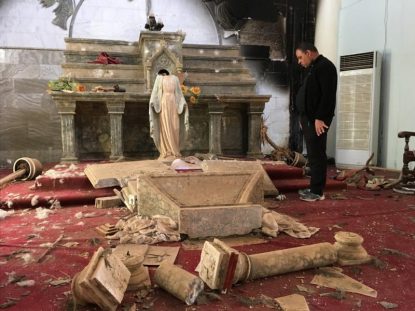 A Catholic church destroyed by Islamic State militants in Karamdes, Iraq, is examined by a priest following the 2016 liberation of the predominantly Christian town. (CNS photo/courtesy Archdiocese of Irbil)

Gabriel fled Syria in 2012 shortly before he was to be executed for being a Christian and refusing to convert to Islam. He and his wife, Maya Tayar, joined their daughter in Omaha, where Rula is a member of St. Robert Bellarmine Parish.

Bishop Habash was born, raised and served as a priest and bishop in Iraq. Since 2010 he has led the New Jersey-based Diocese of Our Lady of Deliverance for Syriac Catholics in the United States and Canada.

In an interview with the Catholic Voice, newspaper of the Omaha Archdiocese, Bishop Habash described the centuries of persecution Christians have faced in the Middle East.

“Christians never enjoyed peace or freedom from the re-emergence of the Persian Empire to the area’s domination by Islam,” he said. “This is the reality one must understand and appreciate when speaking of Christians in the Middle East.”

Bishop Habash said that Islam has succeeded “in nearly eliminating Christianity in some places in the Middle East that had been Christian homelands — Saudi Arabia, Qatar, the Holy Land, Jordan, Egypt and Iraq.”

“From the seventh century until today, the religious identity of the region has been completely changed,” Bishop Habash continued. “Christianity has virtually disappeared, owing to the various means of persecution — sometimes overt, at other times by legislation influenced by the Quran, and still other times by political decrees. There have only been a few periods when Christians enjoyed a peaceful or secure existence.”

He said the persecutions and destruction directed by ISIS militants against the Christians in Iraq, Syria and Egypt “are merely repetitions of what has occurred so often previously to the Christians of the Middle East.” But today this is displayed “before all the world” because of mass media, he added.

“Clearly two-thirds of the Christian population of Iraq has been uprooted by various recent events,” Bishop Habash said, and Christians have only “a very marginal existence in countries of the Middle East.”

During his recent visits to Iraq, he said, he has “discovered with great sadness the complete lack of caring by the Iraqi federal government and local governments” concerning “their citizens” — the displaced Christians, the refugees.

“I found that Christianity is not at all a matter of concern for the Islamic leadership,” he added.

Despite their hardships, the people have “a vibrant faith,” he said. “It is as if they say we are ready to lose everything — house, property, possessions, money, everything — but nobody can take the unique pride we have, which is our Christian faith,” he added.

Bishop Habash praised relief efforts by the Knights of Columbus and Catholic Relief Services in particular and other nonprofit Christian and other organizations.

He said, though, he thinks such efforts in these Middle Eastern countries would be more effective if they were supervised and coordinated by the Vatican nunciature in each of the affected countries.

Last August in St. Louis, Bishop Habash spoke about the genocide and persecution of Christians in Iraq and Syria at the Knights of Columbus Supreme Convention. Conrad and Hubschman were there and heard his remarks, which inspired them to do something to help these displaced Christians and refugees.

Returning to Fort Calhoun, they discussed with their council the possibility of taking part in the Knights rebuilding project by funding construction of five homes. They quickly raised $10,000, Conrad said. From there, the idea blossomed into March 9-10 fundraising event.

“Although there is no specific fundraising goal, we are getting a lot of positive support, and the council is trying to fund as many homes as possible,” Hubschman said.

Several council members have been speaking to other Knights councils around the area about the plight of the refugees and inviting members to support the project.

“After expenses, 100 percent of the proceeds raised during these events will go to rebuilding homes and lives,” Conrad said.