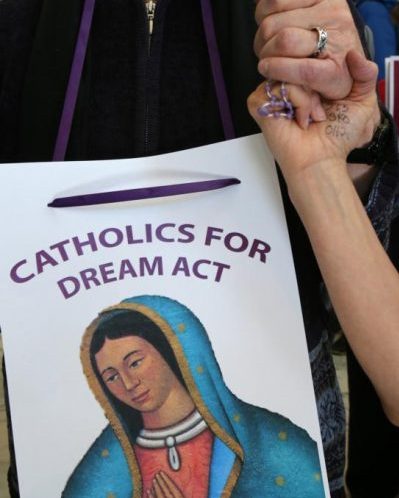 A man and woman hold hands as they pray inside the Russell Senate Office Building in Washington Feb. 27 during a “Catholic Day of Action for Dreamers” protest to press Congress to protect “Dreamers.” (CNS photo/Bob Roller)

WASHINGTON (CNS) — As the once-feared March 5 deadline came and went, a bishop from the U.S.-Mexico border prayed with young adults in the streets of Washington just before they marched and chanted near the Washington Monument on the day President Donald Trump set as a deadline to end a program that keeps many of them in the country legally.

Bishop Mark J. Seitz of El Paso, Texas, stood with them as they clamored for a permanent solution to their plight, a task that the president had asked lawmakers to finish by the March deadline but one they never finished.

The deadline was set to find a legislative solution to safeguard approximately 1.8 million young adults brought into the country illegally as minors, but it was rendered meaningless by legal challenges. Courts are now arguing whether the president had a legal right to end the Deferred Action for Childhood Arrivals, or DACA program.

But on the day the deadline passed, far from his much warmer home in the Diocese of El Paso, Bishop Seitz walked from one government building to the next after his brief encounter with the youth and to a whirlwind of meetings to defend DACA, to speak about what politicians and their rhetoric are doing to those who live on the border, and to talk about people fleeing dangerous conditions in their home countries and seeking safety in the U.S.

If there’s an issue that unites U.S. bishops at this moment, he said, it’s immigration.

“You’d be hard-pressed to find an issue in which we are more united,” said Bishop Seitz March 6 at one of his stops, the Bread for the World offices in Washington. That’s because immigration in this country involves the most vulnerable in society, he said, and Christians who are not on the side of the vulnerable “need to rethink” what they’re doing.

“We’re not moved by a political game,” he said, acknowledging to those in the audience that there are Catholics who have criticized the bishops for their support of immigrants and refugees.

Ashley Feasley, policy director for Migration and Refugee Services at the U.S. Conference of Catholic Bishops, told the bishop in that meeting at Bread for the World that while the Feb. 26 “National Catholic Call-In Day to Protect Dreamers” garnered some 50,000 calls advocating for the undocumented youth, there also were many other calls from Catholics who were upset about it and complained.

“There are a lot of Catholics not on board,” Feasley said.

Bishop Seitz said that while some disagree, Catholics who are active in their parishes, “they get it,” and understand why church leaders are out there advocating for them. Calling people “illegal,” using terms, such as “chain migration” to refer to family unification, terms that paint immigrants as subhuman or take away their dignity, is “not Catholic and it’s not Christian,” he said.

Though practically all bishops throughout the country are seeing up-close the fear and threats immigrants in their dioceses and communities are facing, Bishop Seitz is one of the few who lives in a border community, which he said is a place that has transformed with the immigration debate, and not for the better.

He takes issue with those who’ve painted the border as a place of conflict when it had been, in the past, a place for families to be united and for communities from two different countries to encounter one another. They relied on one another for commerce and the back-and-forth travels they once freely enjoyed fostered understanding, fellowship and interdependence, he said.

But politicians have painted the border, a place many call home, as a place of polarization, he said, and that has brought about an increase in police presence and other law enforcement. It’s added to a feeling of tension among those who live near it.

“Militarization is not an extreme word,” he said.

Rhetoric coming from the White House, and others who are fanning anti-immigrant flames, has added to a sense of not belonging, even among those with deep roots along the border. The bishop said that when the people of Mexico were denigrated by being called criminals, drug dealers and rapists, some children living along the border asked: “Mom and Dad, are we Mexican?”

“It cuts into the self-worth of people,” he said.

In a March 5 interview with Catholic News Service, Bishop Seitz said that part of the reason he had taken the time to join the young adults demonstrating along the National Mall was to give them encouragement during an uncertain and difficult time. He wanted them to know they had worth, even as some of them might be feeling that others don’t care about them or what they’re going through.

“I wanted to say ‘the church hears you. We know you’re not a threat but a blessing,'” he said, adding that some of them “were a little surprised” to see a bishop join them.

“They were happy I was there,” he said. “I wanted to take the time to hear their stories.”

Listening to immigrants’ stories is what can help change hearts, he believes, and the bishop has done more than his share of hearing many of them.

In August, he made headlines by visiting an 8-year-old girl with cancer whose mother, her only caretaker, was facing a deportation hearing in Texas. He visited the girl in the hospital and attended the hearing with immigration authorities in her mother’s place. Recently, he met with bishops from both sides of the border to hear their concerns about how to help those who are deported.

He has stopped by centers where minors seeking asylum are detained as well as other facilities that detain immigrants caught trying to cross the border and who are apprehended by authorities.

“It’s scandalous, the whole system,” he said to CNS. “They come here seeking safety and we throw them in jail? How can you not be moved?”

What U.S. authorities are doing to those seeking refuge is what repressive countries do, he said, and that’s why he feels the need to speak out. He spent part of his time in Washington talking to congressional leaders, telling them that the young adults he stood with have “renewed everyone’s faith in the American dream.”

He advocated for asylum seekers and for immigrants who have been in the country for decades under a provision called Temporary Protected Status, which is about to expire.

“Don’t let the political morass of Washington take you over. Stand for something,” he said.

“We don’t feel they’re listening right now,” he told CNS. “They’re involved in political horse trading and ideologies.” And that can be “very frustrating,” he admitted, but said that as a man of faith, he operates on hope and would continue to advocate for the vulnerable, which is what Jesus taught.