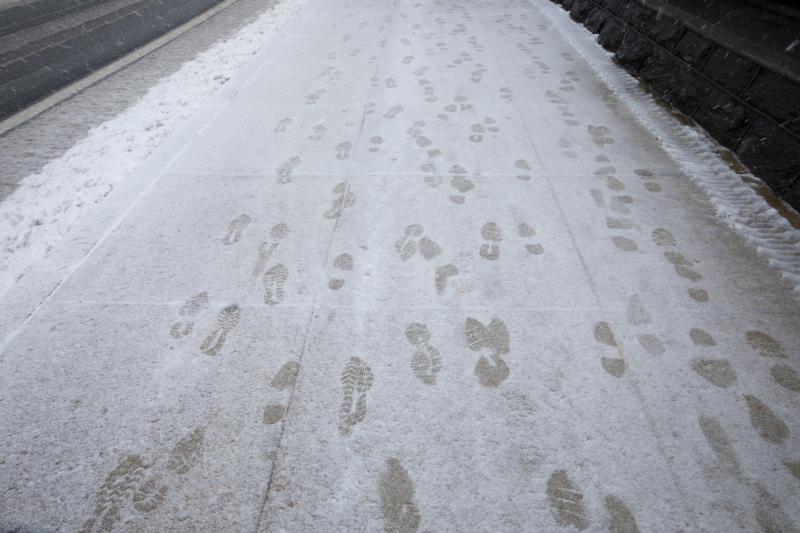 Footprints are seen near the U.S. Supreme Court in Washington March 21. The gun violence protest March for Our Lives is scheduled for March 24 in the nation’s capital. (CNS photo/Tyler Orsburn)

WASHINGTON (CNS) — For one group of students from a Catholic school in Ohio, the decision to join the March 24 March for Our Lives in Washington was in part prompted by a brief encounter with the reality of gun violence in America’s schools.

Days before the Feb. 14 school shooting that left 17 dead at a Parkland, Florida, high school, the community of St. John’s Jesuit High School & Academy in Toledo had a school shooting scare of its own when students spotted a threat made by a local teen on the mobile messaging app Snapchat. They quickly alerted authorities.

Local police and school personnel quickly moved into place, locked down the school, warned those who had yet not arrived to stay away from St. John’s and another nearby school. Authorities then apprehended the minor who made the threat and who was a student at a different school.

“The Snapchat threat before Parkland, I think it has hit home to our student body,” said Phil Skeldon, administrator for pastoral ministries and outreach at St. John’s. He and other faculty are scheduled to accompany a group of 20 students from the Jesuit school who are joining the thousands expected to march in Washington, calling on lawmakers to do something about gun violence.

“Most of this came from the students, they wanted to do something,” Skeldon said in a March 19 phone interview with Catholic News Service, adding that St. John’s pupils have in the past traveled to the nation’s capital to participate in events and to lobby for causes they believe in such as the March for Life and a Jesuit schools’ gathering that focuses on social justice.

Michael Theis, 18, is one of the students who plans to participate in the march. The threat in late January made many students in the St. John’s community face personal beliefs about guns, talk about and debate the issue, and spurred some to action, including Theis.

“There’s a wide range of beliefs on both ends of the spectrum,” he said. Some want to arm teachers, others want stricter gun regulations or banning weapons altogether, he said.

Though Theis has grown up around guns and has used them, he favors stricter gun controls.

“I’m not against them,” he said of guns, “but I definitely don’t want to be walking through metal detectors or past police officers with rifles. I don’t mind if it takes longer to purchase them.”

His fellow schoolmate, Keyur Patel, 18, said he and his family are “really adamant” about gun control.

“I’ve always had the mindset that no one needs to own an assault rifle,” said Patel. Those beliefs, reinforced by the threat made at his school, moved him to join other high school students and their supporters in Washington.

The event, organized by survivors and friends of those who died at Florida’s Marjory Stoneman Douglas High School, where the latest mass shooting in a school took place, has garnered national support. Authorities in Washington say they expect a crowd of about half a million. Many Catholic groups, including the Sisters of Mercy of the Americas, the Franciscan Action Network, and various Catholic schools and parishes plan to attend.

Skeldon said that the group from St. John’s initially couldn’t get a bus to transport students to Washington, possibly because of the demand from others wanting to join the march.

He said the school tries to get the students to debate and articulate what they believe in and to understand those with whom they disagree — a lesson that extends to the faculty as well, which itself is trying to figure out the best way to protect students and staff.

“I do know we have to protect our students and our staff,” he said. “I’m torn about school security.”

Gun violence was not an issue he thought he’d have to deal with when he began his teaching career 32 years ago, he said. But he initially saw that schools had to do something following the 1999 school shooting at Columbine High School in Colorado. That led to the installation of door buzzers and cameras, he remembered, but now after each subsequent school shooting, “it’s a step up all the time” in terms of security, he said.

The local police department in Lucas County, where St. John’s is located, now regularly “walks” the schools, public and private, trying to get new officers to become familiar with the physical landscape in case tragedy should one day strike at the school, he said. The school also practices lockdown drills and tries to replace old windows with reinforced glass that shatters and does not break, in case there’s a shooting threat from outside.

Those are difficult things to think about because schools were built and conceived as inviting and open spaces for students. Now administrators are having to consider security issues, which include how or whether to “filter” students through one entrance or several, he said, keeping security at the forefront.

Though he admits that a shooting tragedy could strike any school, Catholic schools such as St. John’s, with a smaller and more intimate setting, provide an atmosphere where teachers can get to know their students and know what is happening in their lives, Skeldon said.

In the case of the threat at St. John’s, that relationship led students to speak out about what they were seeing on social media. They told their elders who called authorities and a potentially dangerous situation was averted, Skeldon said.

From the point of view of students like Patel and Theis, whose generation has grown up with the specter of school shootings, the solution to their safety rests with lawmakers and they’re hoping that a strong show of numbers March 24 will make them listen.