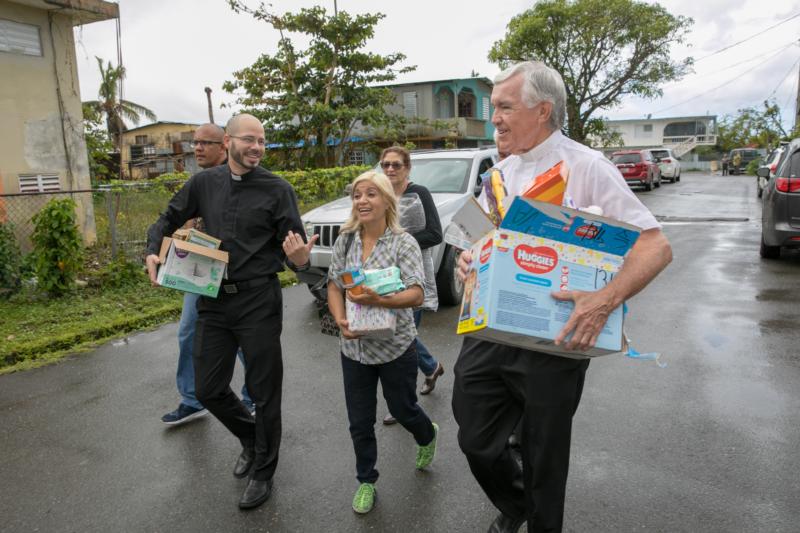 CHICAGO (CNS) — Six months after Hurricane Maria wreaked unprecedented devastation on Puerto Rico, the island is still suffering, and much of the relief and recovery help people have received has come from Catholic parishes.

To help those parishes continue “their spiritual and corporal works of mercy and serve their communities,” Catholic Extension in Chicago has launched a new campaign called “Patrons of Puerto Rico.”

“Puerto Rican parishes have been so inspiring in their response to the recent hurricanes,” Catholic Extension said in a March 20 statement.

“Often operating out of badly damaged buildings and celebrating Mass in temporary quarters, parishes have rallied armies of volunteers to distribute relief supplies and provide community and connection for the elderly and most vulnerable,” it said.

The Chicago-based papal society is inviting individual donors, parishes and church groups to partner with it and “adopt” a parish. At its webpage www.catholicextension.org/patron, an interactive map features examples of Puerto Rico’s Catholic communities helping their neighbors.

“In this time of crisis,” Extension said, “parishes across the island have exhausted themselves in providing material and spiritual comfort, while their own financial sources have been greatly diminished by the increases in poverty and unemployment and the slow progress toward recovery. The needs of Puerto Rico’s parishes are great, and they will require support over the next few years.” 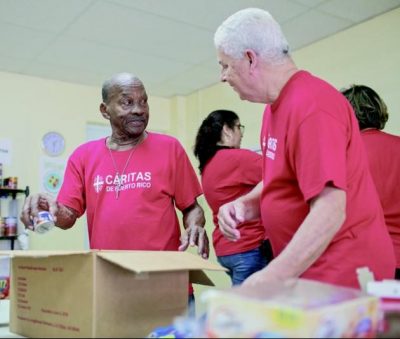 Catholic Extension raises and distributes funds to support U.S. mission dioceses, many of which are rural, cover a large geographic area, and have limited personnel and pastoral resources. In Puerto Rico, it has a 110-year history of supporting parishes in the six dioceses there.

Its first church-building assistance was to the Archdiocese of San Juan in 1908. Since then it has supported 1,400 construction and repair projects of church buildings in Puerto Rico. Extension also has supported church leadership development and ministry.

The agency’s staff saw firsthand some of what parishes and their parishioners are going through during a Feb. 27-March 1 visit to Puerto Rico.

They met with Father Jorge Morales, pastor of Our Lady of the Rosary Parish in the northern Puerto Rican town of Vega Baja, and several of his parishioners. The parish is in the Diocese of Arecibo.

A couple of days after a direct hit from Hurricane Maria had devastated much of Vega Baja and after the floodwaters had receded enough, Father Morales and some of his parishioners were finally able to reach their historic church.

The storm had ripped open the heavy doors, flooded the church, torn off the roof and smashed the windows. It had been left in ruin and was unusable.

“We were heartbroken,” said Miguel Rios, one of the parishioners. “This church is like a second home to us.”

But Father Morales told them, “The church building is secondary. The important thing is to take care of our neighbors. They need us now.”

The priest and his parishioners were the first to reach and bring food to the hardest-hit neighborhoods of Los Naranjos and Sabana, where many people had lost everything. They organized a coordinated effort to deliver food, water, supplies — and hope.

For six weeks, they prepared and delivered about 200 warm meals each day. That work continues six months after Hurricane Maria.

“It was incredible,” Father Morales recalled. “I never asked for a single dollar of donations to buy the food. But somehow every day, people who had very little themselves gave us some of their money or brought food that we could cook.”

The priest said he was struck by a great sense of generosity in such crisis among his parishioners, who are working-class and poor. Many have lost much themselves but have reached out to those in worse shape.

Father Morales called it “an opportunity for us to rediscover our Christian vocation, which is to go out and reach out to those in need and to proclaim the good news with our witness of service and practice of charity and solidarity.”

Meanwhile, his parish celebrates Mass in a crammed room of the parish center. Buckets are set up to catch the water dripping from the ceiling.

Like Our Lady of the Rosary, churches all across the island have been serving their communities, despite their own problems in the aftermath of Hurricane Maria.

“In moments of great difficulty and challenge, you can see the power of faith communities alive in people’s hearts and lives,” Father Jack Wall, president of Catholic Extension, said during the Catholic Extension staff’s visit to Puerto Rico.

“People come together in faith in moments of crisis to strengthen one another and to realize that they are not alone,” he added in March 1 statement. “They are reaching out beyond themselves to become God’s healing touch and healing care for those in the communities around them. As faith communities, we embody the spirit of God. We are one together.”

Faith communities have played a crucial role in delivering help, hope and healing to people, underscoring their importance for the communities they serve, particularly in remote and isolated areas.

“The island’s Christians are clearly playing a central role in the recovery,” noted The Wall Street Journal in November. “Although many church buildings have been damaged, the churches that remain are a haven for those in need.”

According to many news reports, government and relief agencies failed to reach many of the more isolated, impoverished areas for weeks. In some places, residents note that without the churches springing into action, relief efforts would have been totally stymied.

As of March 20, power had been restored to 93 percent of the island, but about 121,000 residents were still in the dark; crews continued to work to restore power in mountainous barrios, or neighborhoods. Three generators from the Federal Emergency Management Agency are still providing power to the island’s electric grid.

According to Catholic Extension, without the help of Catholic churches: Many helpless, elderly community members stranded in destroyed or damaged homes would not have been sought out and cared for; many of the hundreds of thousands of meals desperately needed in the first few weeks after Maria would not have been prepared and distributed; and many people would not have had access medical services.

Since Hurricane Maria, Catholic Extension has provided and committed more than $1.1 million in support of the Catholic Church in Puerto Rico.

Catholic Extension said that donors’ response to its fundraising appeals have helped all the U.S. mission dioceses devastated by last year’s hurricanes. In addition to Puerto Rico’s six dioceses, those include the Diocese of St. Thomas in the U.S. Virgin Islands and the Diocese of Beaumont, Texas.

NEXT: Can axe-throwing Man Tour hit target of leading young men to the church?