Catholic peace activists face charges after detention at submarine base 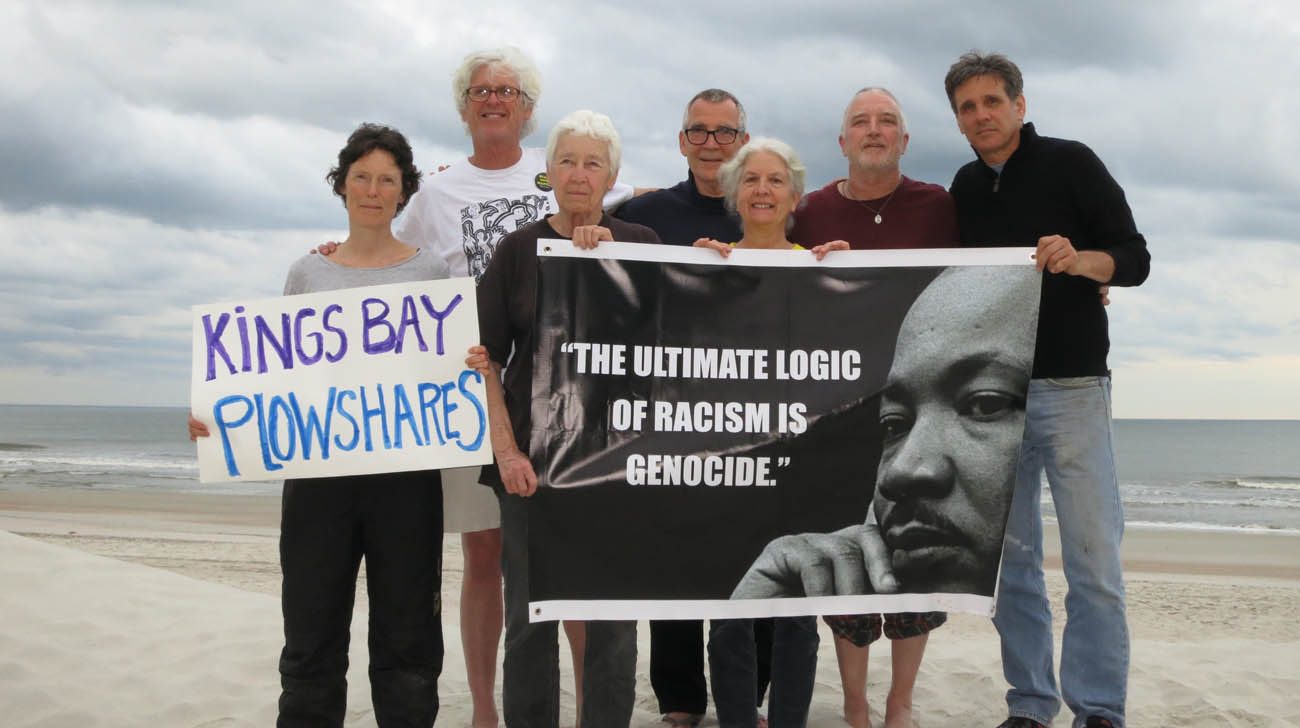 Calling themselves the Kings Bay Plowshares, seven Catholic peace activists were arrested at Naval Submarine Base Kings Bay in Georgia April 5. The protesters said they took the action to mark the 50th anniversary of the assassination of the Rev. Martin Luther King Jr. and to repent for the "sin of white supremacy" that guides U.S. military policy. (CNS photo/Kings Bay Plowshares)

UPDATED – WASHINGTON (CNS) — Seven Catholic peace activists were denied bail during a court appearance April 6, a day after they were detained after entering Naval Submarine Base Kings Bay in Georgia to protest nuclear weapons.

Calling themselves the Kings Bay Plowshares, the seven faced charges of possession of tools for the commission of a crime and interference with government property, both felonies, and criminal trespass, a misdemeanor.

Chief Magistrate Jennifer E. Lewis of the Camden County Magistrate Court said in court she was denying bond, claiming that they posed a threat to the community because she believed they could return to the base.

The Navy’s fleet of Trident submarines carries about half of the U.S. active strategic nuclear warheads, according to military observers.

The activists said they chose the date of April 4 to undertake their action to mark the 50th anniversary of the assassination of the Rev. Martin Luther King Jr. and to “repent of the sin of white supremacy that oppresses and take the lives of people of color here in the United States and throughout the world.”

Scott Bassett, public affairs officer at the base, confirmed to Catholic News Service that seven “unauthorized individuals were caught trespassing on the base” shortly after 1 a.m.

He said they were turned over to the Camden County, Georgia, law enforcement authorities and that they faced charges of trespassing and defacing federal government property.

“At no time were any military personnel or military assets threatened with their presence,” Bassett said.

Jessica Stewart, a supporter of the group and a Catholic Worker in Bass Harbor, Maine, told CNS the seven arrived at the base in southeast Georgia about 10:30 p.m., April 4 and entered shortly thereafter.

Bassett declined to say why it took base personnel more than two hours to find the activists, who had split into three groups.

Stewart said the group place crime scene tape and spilled blood at different locales on the base while posting an “indictment” charging the military with crimes against peace, citing the Nuclear Non-Proliferation Treaty.

A news release from supporters said McAlister, Kelly and Trotta were discovered at nuclear weapons storage bunkers; Grady and Hennessy were detained at the base administration building; and Colville and O’Neill were at monuments commemorating the submarines.