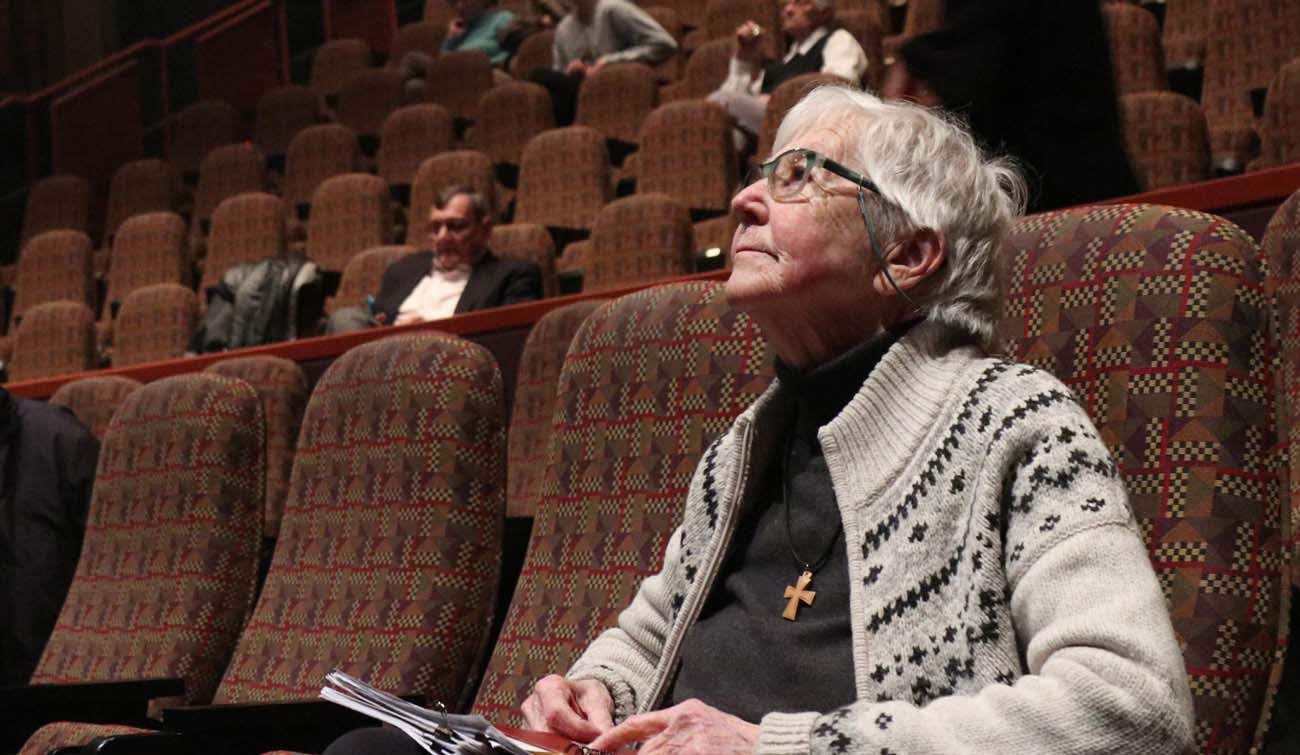 Sister Megan Rice, a member of the Society of the Holy Child Jesus, looks up at the movie screen in the DeBartolo Performing Arts Center April 8 at the University of Notre Dame in South Bend, Ind. Sister Rice was awaiting the screening of a new documentary about her anti-nuclear activism called "The Nuns, The Priests and The Bombs." (CNS photo/Katie Rutter)

SOUTH BEND, Ind. (CNS) — From her petite frame, knit sweater and snow-white hair, it would be difficult to guess that 88-year-old Sister Megan Rice, a member of the Society of the Holy Child Jesus, recently spent two years behind bars for a felony.

Even more difficult to comprehend: This octogenarian was invited to a congressional hearing, spoke at the United Nations in New York City and is now touring the country as the star of a new documentary.

“(I feel) very incompetent to be able to do it properly,” she explained to Catholic News Service when asked about her newfound role as spokeswoman for a cause close to her heart, “but at least I have a human experience and I have a responsibility to share.”

Sister Rice sacrificed two years of her freedom and is now campaigning across the country to protest the United States’ nuclear arsenal. At an event April 8 hosted by the DeBartolo Performing Arts Center at the University of Notre Dame in South Bend, her eyes lit with passion and her voice became forceful each time she spoke on the topic.

“We’re not being taken to the international court of justice and indicted the way Iran or some other place would,” she said.

It was Sister Rice’s shockingly bold campaign against nuclear weapons that launched her into the spotlight over five years ago and caused her to become the issue’s ad hoc spokeswoman.

In July 2012, the octogenarian breached security to stage a protest at the self-styled “Fort Knox of uranium,” the Y-12 National Security Complex in Oak Ridge, Tennessee. The facility creates and houses materials for making nuclear weapons.

Sister Rice, then 82, and two middle-age companions cut through fences and reached the warehouse that stores bomb-making uranium. There, they splashed blood on the wall, hung banners and spray-painted messages condemning nuclear weapons.

The action sparked national shock and outrage, led to a congressional investigation of the security at Y-12 and sent Sister Rice and her companions to prison.

It also caught the attention of filmmaker and Emmy-winning producer Helen Young. Young was already working on a documentary about this country’s nuclear arsenal.

“I was looking for a way to tell the story from a basis of actual people: a people story,” Young told CNS.

The story of Sister Rice and her companions struck a chord with Young. The filmmaker was already following a similar break-in and protest staged in 2009 in Tacoma, Washington, by a group that included Sacred Heart Sister Anne Montgomery and Jesuit Fathers Stephen Kelly and Father Bill Bichsel.

Titling the documentary “The Nuns, The Priests and The Bombs,” Young followed the aftermath of the protest by Sister Rice, her prison sentence and the story of the Tacoma group. Young also interviewed policy, law and scientific experts for insight on the current state of U.S. nuclear weapons.

“I think a lot of people don’t even know we have (nuclear weapons), how powerful they are today,” Young explained.

In a statement Nov. 10, 2017, Pope Francis condemned even the possession of nuclear weapons as immoral. The United States, according to the Federation of American Scientists, has approximately 6,450 nuclear weapons as of March 2018.

“Progress toward nuclear disarmament is stalled and actually things seem to be moving in the opposite direction,” Powers said.

“(The documentary) is extremely relevant because the United States is about to embark on the modernization of its nuclear arsenal,” said Young. “U.S. taxpayers will be paying $1.3 trillion over the next 30 years to modernize their nuclear weapons.”

On April 5, activists were arrested for another break-in similar to the ones chronicled by the documentary. Seven protesters, including Jesuit Father Stephen Kelly, who is featured in the documentary, and Martha Hennessy, the granddaughter of Catholic Worker Movement co-founder Dorothy Day, trespassed onto the Kings Bay Naval Submarine Base in Georgia.

The group, decrying submarines that carry nuclear warheads, spray-painted slogans on base sidewalks and displayed banners about peace.

“Nonviolent protest is a critical dimension in any strategy for achieving disarmament,” said David Cortright, defending the actions of Sister Rice though she was convicted of depredation of property.

A longtime advocate for nuclear disarmament, Cortright is a professor at the Keough School of Global Affairs and the director of policy studies at the Kroc Institute for International Peace Studies, both at the University of Notre Dame.

“We need a little bit of little creative protest and dissension against the system which is unacceptable, immoral and threatens to destroy all life on this planet,” he told CNS ahead of the Notre Dame screening.

Sister Rice, Cortright and Powers all maintain that disarmament, while challenging, is possible.

“The church has a much more hopeful view of what is possible in international affairs,” said Powers.

“They know it’s a long-term goal, they know it’s utopian, but ending the Cold War without a third world war seemed utopian — until it happened,” he said.

In addition to the University of Notre Dame, Young’s documentary has been screened at the United Nations in New York City as well as the Carnegie Institution and George Washington University, both in Washington.

A trailer and list of upcoming screenings, as they are scheduled, can be found here.

NEXT: Georgetown gathering seeks to overcome polarization within church