Pedaling to the peripheries: Bishop to lead team in bike ride across Iowa 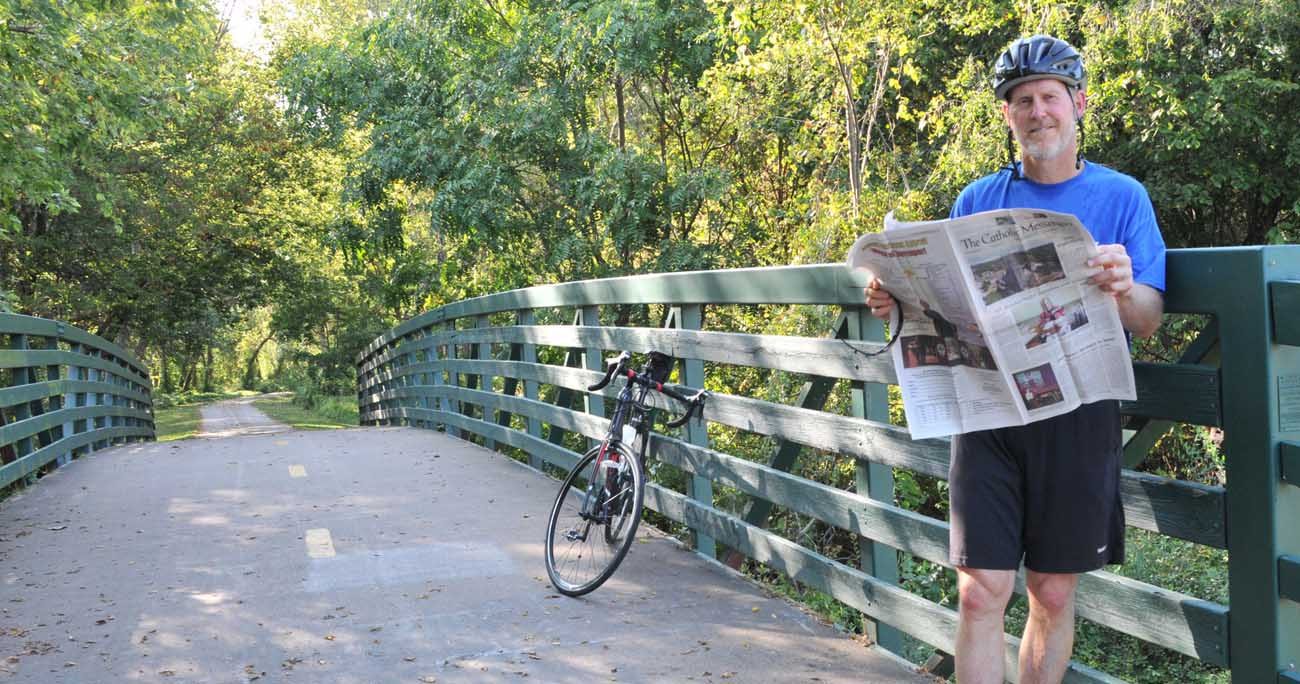 Bishop Thomas R. Zinkula of Davenport, Iowa, poses for a photo alongside his bicycle along Duck Creek in Davenport. Bishop Zinkula will be riding in RAGBRAI XLVI, the Register's Annual Great Bicycle Ride Across Iowa in July, with a group from his diocese. The noncompetitive ride is organized by The Des Moines Register daily newspaper. (CNS photo/Lindsay Steele, The Catholic Messenger)

DAVENPORT, Iowa (CNS) — Bishop Tom R. Zinkula of Davenport takes his cue from Pope Francis. Go out to the peripheries, to the margins. Be a shepherd who lives with the smell of sheep.

The bishop will probably get a whiff of a few sheep along with cattle, pigs and other critters that populate Iowa’s rural landscape during the Register’s Annual Great Bicycle Ride Across Iowa this summer. The noncompetitive ride, best known as RAGBRAI, is organized by The Des Moines Register daily newspaper.

Bishop Zinkula will exchange his miter for a bicycle helmet to lead the diocese’s “Pedaling to the Peripheries” team of 20 bicyclists and support crew for RAGBRAI XLVI. This year’s 428-mile ride starts July 21 in Onawa and ends July 28 in Davenport, his “home turf.”

There will be eight overnight stops along the way.

“Pope Francis talks about encounter and dialogue. We are going to encounter people who are on the peripheries of the church; people who are unaffiliated or who have drifted away. There are lots of those people,” Bishop Zinkula told The Catholic Messenger, Davenport’s diocesan newspaper. “That’s what we’re supposed to do, go out to the people.”

Riding a bike, he’ll look pretty much like everyone else on the tour. People will catch on though, when he celebrates Mass the first night and shares in other faith-building experiences throughout the week.

Some of the thousands of bicyclists on the tour may feel more inclined to participate, on their own playing field and not in a church. They may be intrigued to learn he’s a bishop, more open to asking questions, which Bishop Zinkula said he’ll be glad to answer.

“It will be an opportunity to connect with people. I’m sure there will be many who will be surprised to learn that I am a bishop. It will catch them off guard. I will simply be another bicycle rider. Hopefully they will experience me as an equal and open up,” he said.

“I’ve also done a day or two of RAGBRAI here and there over the years,” he said.

“What I like about the tour is seeing parts of Iowa I have never seen before, and you get a leisurely, up-close look when you are riding a bike,” he remarked. “I also like meeting many fun and interesting people during the course of the week — fellow riders, townsfolk, etc. Finally, there is a lot of good food and plenty of exercise.”

Pedaling to the Peripheries organizer Jim Tiedje, a retired banker and member of Sacred Heart Cathedral Parish in Davenport, has experience organizing RAGBRAI teams with his brother, Bill.

“There’s something about the humanness of a bishop going out and doing what other normal people do, for people to see the bishop riding a bike,” Tiedje said.

He said he also looks forward to the hospitality that is a staple along the route.

“It’s amazing how people open their cities and doors to us; they go out of their way to be welcoming,” explained. “It serves as a reminder to our parishes about the importance of welcoming others.”

Arland-Fye is editor of The Catholic Messenger, newspaper of the Diocese of Davenport. She will be riding with the diocesan RAGBRAI team and reporting along the way.