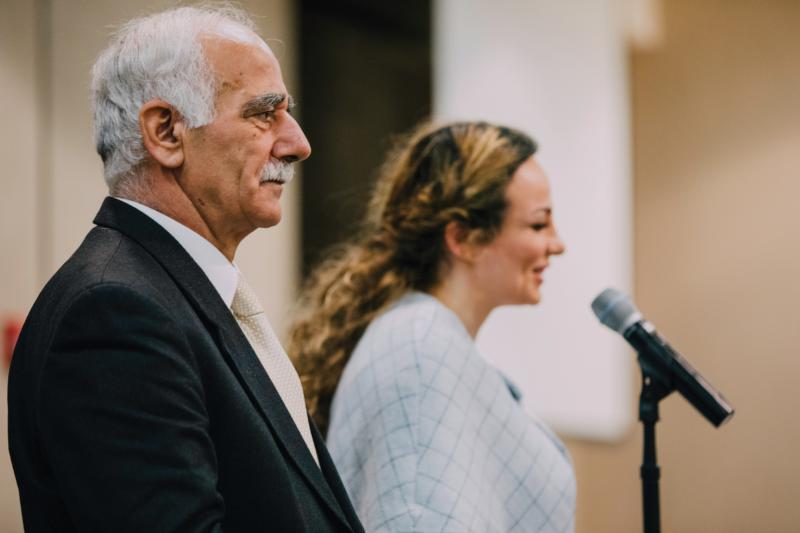 Syrian refugee Gabriel Jabbour and his daughter, Rula, talk about his narrow escape from their war-torn country at a March 10 Knights of Columbus benefit dinner and auction at St. Robert Bellarmine Parish in Omaha, Neb. (CNS photo/Knights of Columbus)

OMAHA, Neb. (CNS) — A middle-of-the-night phone call — then another — alerted Gabriel Jabbour to the threat.

Reluctantly, he packed a few belongings and $3,000 in cash, and fled from Syria with his wife to avoid being publicly executed by Islamic State militants.

Now living in Omaha, Jabbour shared the story of his narrow escape and the Catholic faith that sustains him during a dinner and auction hosted by St. Robert Bellarmine Parish to help raise funds for resettlement of Middle East Christians displaced by terrorism, war and persecution.

That effort — “Rebuilding the Cradle of Christianity” — is being led by St. John the Baptist Parish Knights of Columbus Council 10305 in Fort Calhoun. The dinner and auction drew more than 330 people to the Omaha parish’s Mainelli Center and raised about $125,000, more than double the group’s goal.

Proceeds will fund construction of 60 or more simple homes as part of an international Knights of Columbus effort.

“We witnessed love in action,” said Mike Conrad, a supreme director on the Knights of Columbus national board, a member of St. John the Baptist Parish and co-coordinator of the local effort. “The generosity and outpouring of support exceeded our expectations. It was incredible.”

Donations will continue to be accepted through the end of the year at cradleofchristianity.org, he told the Catholic Voice, Omaha’s archdiocesan newspaper.

During the dinner and auction in early March, Jabbour shared his story through his daughter and interpreter, Rula, a member of St. Robert who came to the United States in 2008 to attend college under a U.S. State Department scholarship program.

Syriac Catholic Bishop Barnaba Yousif Habash, who heads the Our Lady of Deliverance Eparchy based in Newark, New Jersey, and leader of Syrian Catholics in the United States, celebrated the Mass, and spoke at the fundraising events.

Speaking with the Catholic Voice, Rula Jabbour described the persecution of Syrian Christians and her father’s desire to return to his homeland.

When Islamic State (ISIS) militants occupied Kennseba, Syria, in 2012, her father, a leader in the community and his church, resisted the group’s pressure to convert to Islam, making him a marked man, she said.

“Religion is not something you just practice on Sunday,” Rula said. “It’s your identity, it’s your honor, your life, it’s who you are.

“My father made it clear that there was no way his family was going to convert to Islam. He said, ‘I will stand until my last breath of my body and I will not allow anyone from my family to convert.'”

Previously living under the secular Syrian regime, Christians had full rights, Rula said. But as a result of the Arab Spring movement, the Syrian civil war and the rise of ISIS, persecution and hardship became widespread.

Kennseba has since been heavily damaged by insurgents and ISIS, and Jabbour’s home and extensive farming operation were destroyed.

Before their sudden flight from Syria, Jabbour and his wife, Maha Tayar, had obtained visas and planned to visit Rula and her husband, Awad Qumseya, who were expecting a child at the time. Once in Omaha, they expected to stay two or three months.

“My mother says, ‘At least we’re with family,’ but my father’s not adapting well,” she said. His heart is in Syria. “He is in pain because he cannot help the people who are still there.”

The Jabbours are grateful for the concern and efforts of the Knights of Columbus to help Middle East Christians. “Finally, it’s telling the people there that they’re not alone,” she said.

NEXT: Pedaling to the peripheries: Bishop to lead team in bike ride across Iowa