College diploma: source of pride and uncertainty for graduating Dreamers 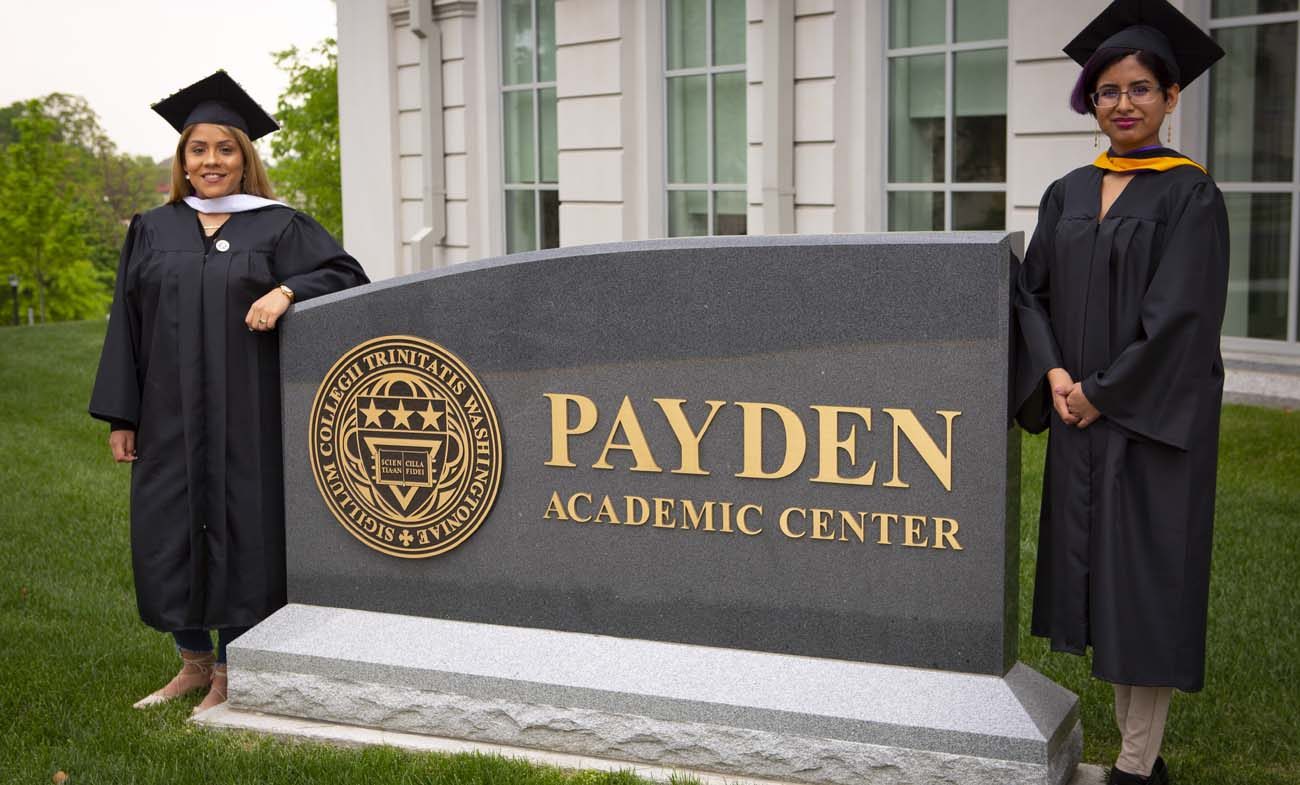 Brenda and Yarely are two of the thousands of Deferred Action for Childhood Arrivals program recipients who are graduating from college this spring in the U.S. They pose for photos wearing their caps and gowns May 10 at Trinity Washington University. (CNS photo/Chaz Muth)

WASHINGTON (CNS) — A group of current Washington Trinity University graduates are proud of what they’ve accomplished but also very anxious about the future.

These emotions could ring true for almost any graduate, but for this group of 21 graduating Dreamers — among the hundreds of thousands in the U.S. protected, for now, by the Deferred Action for Childhood Arrivals program, or DACA — these feelings are even more intense.

That’s because many of these students who came to the United States as children when their parents immigrated here without documentation, never imagined they would be able to afford to go to college or graduate in four years. And now, like other graduates across the country, they worry about financing grad school or getting good jobs all while fearing the worst: possible deportation for themselves or their family members as immigration laws remain in flux.

Two of these Dreamer graduates who spoke to Catholic News Service May 10 — in between finishing final exams and awaiting their May 19 graduation ceremony — asked that their last names or the states where they came from not be used to protect their families.

They are among the 20 DACA recipients who started at Trinity four years ago and the first group of Dreamers to graduate from the school. The term “Dreamer” is coined from the Development, Relief and Education for Alien Minors Act, or DREAM Act. One student from the initial group left Trinity and two others joined later as transfer students. The students were among 100 Dreamers who attended the university this year.

All of these students are recipients of scholarships from TheDream.US, a scholarship program for DACA students that partners with colleges. Trinity was the first Catholic college to partner with the program when it started in 2014 and two other Catholic colleges have since joined: Dominican University, just outside Chicago, and Arrupe College of Loyola University Chicago.

Brenda, who came to the United States from Mexico with her family when she was 6, said she will probably cry when she gets her diploma mainly because when she was a senior in high school, she didn’t think she’d be able to even go to college, let alone finish in four years.

She said her mom found out about scholarship program and urged her to apply, but Brenda was skeptical because as she put it: “No one even knew about Dreamers” or DACA four years ago. Which means they didn’t know immigrants without documentation don’t have access to Pell grants, federal education loans or work-study programs and that many of them have to pay out-of-state tuition to go to college in their home states.

Brenda, who is graduating with a double major in business and international affairs, said she wants to get her master’s and doctorate degrees, but she knows it won’t be easy.

“It will be a challenge. I might have to work even harder to get financial support to figure out how I’m going to get there, but I will,” she said with the confidence of someone who has already worked pretty hard.

Brenda disputes a misconception that DACA students are just looking for handouts, noting that everything she and fellow Dreamer students have attained is through hard work. The scholarship program, for example, is only for top academic students.

“We’re competing for a spot and what we do has to be two, three, four and five times better than everyone else,” she said. “We have to earn it.”

Yarely, a graduating senior majoring in biochemistry with a minor in math, similarly stressed the pressure to work hard and the weight of not knowing what the future holds.

The 22-year-old who came to the United States from Mexico with her mother and sister when she was 8, said: “Sometimes I feel like there really is no choice for me, no path, but then I stop and think about my family, my friends and I just keep going because that’s the only thing I can do.”

In the days before graduating, she kept her eyes on the ceremony itself. “I feel that is a win — no matter what — that is definitely a win,” she said.

She doesn’t focus on the fact that her mom won’t be able to attend her graduation. Yarely is used to having to face challenges on her own. Like Brenda, she didn’t do college tours nor did family members help her move in. She simply came to Trinity on her first airplane ride, moved on campus and got to work, literally, holding down two jobs as a student, often tutoring both college and high school students.

A big unknown for her now is the future of DACA, saying she needs it to work and to keep going to school, which she hopes will eventually be medical school. “Not knowing if I am going to even be able to finance that it is definitely something that makes me really scared; it makes me terrified,” she said.

Senior year for these students has been a particular roller coaster starting last September when the Trump administration announced the government was terminating DACA. Multiple lawsuits have since challenged that decision and a recent court ruling issued an order to strike down the end to DACA and reinstate the original program while still giving the government 90 days to explain its decision. In early May, seven states filed a lawsuit to try to end DACA.

Yarely and Brenda have seen both sides of the immigration battle. Neither of them are immune to anti-immigrant rhetoric, but they also are grateful for support from their families, teachers and administrators at Trinity, the scholarship program and the Catholic Church at large.

Yarely said she has had nightmares of “being out on the streets and people yelling to me and to my family, just yelling things that I know aren’t true,” but she also said there are “so many great people out there. … I know people who yell or say incredibly hurtful things are the minority so I feel like that helps me get into perspective that America is not that way; America is not place of hate and ugliness.”

Brenda said she is thankful “for all those who have seen there’s a gap, there’s injustice leaving us out of opportunities just because of our status.” She has hope from those who advocate on behalf of immigrants, especially the Catholic Church, which she saw firsthand during an internship with U.S. Conference of Catholic Bishops.

“Knowing that the church is involved and wants to be involved does give me hope,” she said, adding that church leaders “won’t be quiet about it and are willing to stand up for us and with us.”

Brenda, who has spent most of her life in this country, considers herself to be American and said she is thankful for the opportunities here that she knows she would not have had in Mexico.

“I love this country,” she said, adding: “I do want to stay here and I have all the faith in God that that will be the case.”

Pat McGuire, president of Trinity, compared the first class of Dreamers to graduate from the university to Trinity’s first graduating class in 1900 because both had “vision for how a great college education can change the fortunes of their children and families.”

In an email to CNS, she said the Dreamer graduates were a “force for solidarity” as students of all backgrounds, faculty, staff and alumnae offered personal support and did advocacy work. She said the immigrant students were role models for other students coping with discrimination and setbacks.

The Dreamers’ presence also helped the entire school community to sharpen its “sense of mission and commitment to challenge injustice,” she said.

NEXT: Popes’ communication styles may differ, but message is same, says priest