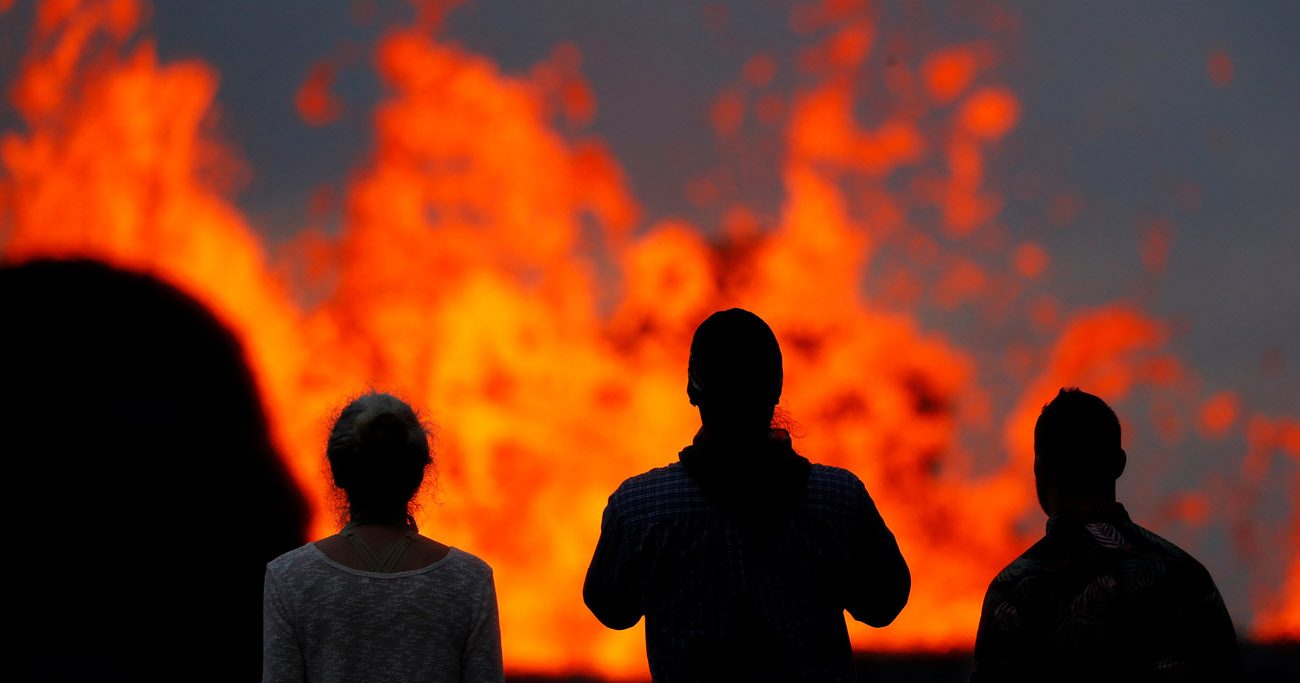 Onlookers stand on a lava flow to watch the Kilauea Volcano May 26 in the Leilani Estates near Pahoa, Hawaii. Hawaii County officials are alerting more residents in the Leilani Estates subdivision to flee fast-moving lava from Kilauea volcano. As of May 29, lava has destroyed 82 structures, including 37 homes. (CNS photo/Marco Garcia, Reuters)

HONOLULU (CNS) — Paul and Rose Utes, members of Sacred Heart Parish in Pahoa, had to leave their home when lava from the Kilauea eruptions moved into their section of the Leilani Estates subdivision in Puna on the Big Island.

At the time they heard the mandatory evacuation order, the couple, who own Black Rock Cafe in Pahoa, were prepping to cater food for Honolulu Bishop Larry Silva’s parish visit that first weekend in May.

While the Utes were at their house retrieving their belongings, a fissure opened up across the street, sending a lava fountain shooting into the air. They later returned to get some of their dogs that had run off after the fissure explosion and a few more things. But with the road to their home fairly inaccessible, they haven’t been back recently.

“It’s just frustrating not knowing what’s going on around your house,” Paul said May 23 in a telephone interview with the Hawaii Catholic Herald, Honolulu’s diocesan newspaper.

Yet Paul said they haven’t accepted much relief support beyond temporarily staying in a friend’s home because they feel there are other people who need it more. Their business hasn’t been much affected by the eruptions so far. And they have insurance, though they still have to pay the mortgage on a house they can’t live in.

The Utes, who have lived in Leilani Estates since 1991, now need to find a long-term place to stay.

“I don’t want these houses. I want my house,” Paul recalled his wife saying sadly as they drove around looking at potential rental properties that would allow their six dogs.

“If everybody could just keep all the people affected in their prayers,” Paul asked. “I know a lot of people that lost their houses and need help. And they’re devastated. And I know quite a few people who didn’t have insurance and lost their houses.” 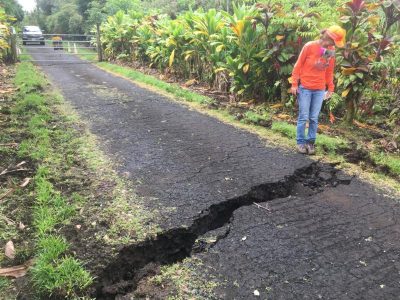 A geologist inspects a crack on Old Kalapana Road on the Big Island of Hawaii May 10. (CNS photo/USGS, handout via Reuters)

“God has looked out after us,” Richard said.

According to Hawaii County Civil Defense, 82 structures to date have been destroyed by lava in this latest outflow from Kilauea Volcano, erupting continuously since 1983. Lava so far has covered more than 2,223 acres.

While Hawaii County issued an evacuation order to subdivision residents, some residents like the Robbinses have gone back to living in their homes. They moved from Miami to Hawaii 19 years ago and love Leilani. Now they regularly drive around the subdivision checking on the homes of friends and neighbors.

“It’s one thing hearing about it, one thing seeing pictures on TV,” Richard said, but another to be there. “We got halfway down a street and we realized that (the rest of the) street didn’t exist anymore.”

Richard said fellow parishioners have been wonderful. One couple offered their deployed son’s home as a temporary residence. The parish food bank asked if they needed food. A non-Catholic local friend has also offered their home further away on the island for Richard and Nancy if and when they might need to leave Leilani again.

“We aren’t in any need, but it’s nice to hear people ask you, even if you don’t need it,” Richard said.

“Leilani is a very, very tight community,” he added. “I’m just hoping we can survive. I don’t want to have to leave Hawaii.”

At Sacred Heart Parish in Pahoa town, you might not know there’s major volcanic activity going on just a few miles away if not for the busy parking lot full of news crews and aid workers, said Lindbergh Marzo, Sacred Heart’s pastoral council president.

The parish, which is 3.5 miles from the eruption, has allowed media and relief workers to use the church’s lot and office bathrooms. At one point the parish hall was a temporary crisis information center. Other parishes have been dropping off donations there as well.

St. Joseph Parish in Hilo filled a 15-person passenger van with food, water, blankets, pillows, clothing, gift cards and other items for Puna evacuees and dropped it off at Sacred Heart May 22. Parishioners also raised a $3,224 cash donation for a local relief fund.

Father Paul Li, vicar forane of the diocese’s East Hawaii vicariate, said the parishes in the vicariate took up a second collection for volcano aid during Masses May 19 and 20, which was Pentecost Sunday.

Father Li’s parish of St. Theresa in Mountain View, which is about 18 miles from Pahoa, and Holy Rosary Mission in Keaau collected $1,164 in their second collection and also delivered blankets, tarps, towels and other items to Sacred Heart for distribution to those displaced residents that need them.

“Some people are grateful for where they are and some people have a lot of anxiety,” Marzo said of the people he knows displaced by the volcano activity.

Leilani Estates is a rural subdivision with large lots on a 22-mile grid. The smaller nearby Lanipuna Gardens also is affected. At least 24 fissures have opened up since May 3, spewing molten rock on what used to be a quiet subdivision, forming a lava lake, sending magma to the ocean and expelling poisonous sulfur dioxide gas.

Editor’s Note: The Honolulu Diocese’s three social service agencies — Office of Social Ministries, HOPE Services Hawaii and Catholic Charities Hawaii — are helping those affected by the volcanic activity. For information on how to donate to the agencies go to http://hopeserviceshawaii.org or https://www.catholiccharitieshawaii.org.

Weaver writes for the Hawaii Catholic Herald, newspaper of the Diocese of Honolulu.