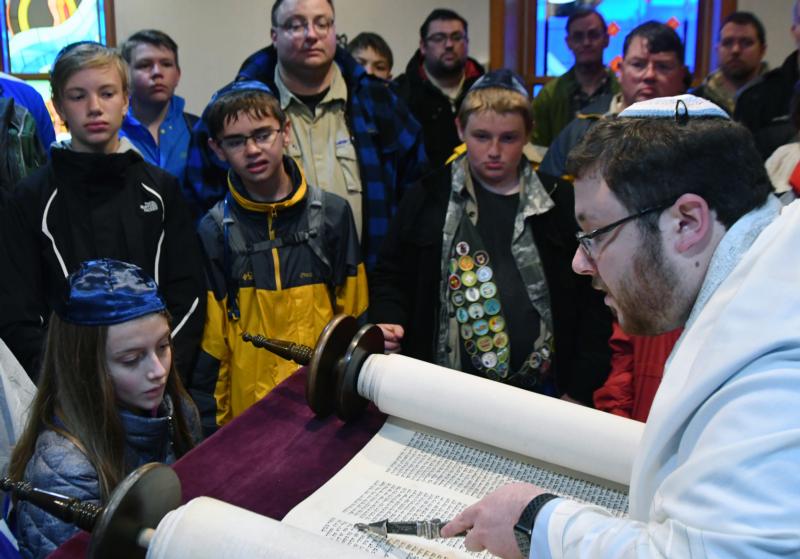 Rabbi Sam Stern reads the Ten Commandments in Hebrew from the Torah scroll at Congregation Brith Sholem May 12 in Ogden, Utah, as part of the Boy Scouts Ten Commandments Walk. The annual walk takes Scouts to various houses of worship, where they learn how the Commandments are put into practice in that faith tradition. (CNS photo/Marie Mischel, Intermountain Catholic)

OGDEN, Utah (CNS) — Each year for the past decade, a group of Boy Scouts in Ogden have spent a day walking from house of worship to house of worship, learning how the Ten Commandments are put into practice in different faith traditions.

“From the very beginning, the idea was to build an awareness of an ecumenical spirit,” said Deacon Herschel Hester, one of the four original organizers of the Ten Commandments Walk.

Because most of the Scouts have never been exposed to a faith outside their own, “the whole idea is for these young men to be introduced to a larger (faith) community than just theirs,” he told the Intermountain Catholic, newspaper of the statewide Diocese of Salt Lake City.

“It has nothing to do with a merit badge, but it all has to do with living out the 12th point of the Scout Law: A Scout is reverent,” said Deacon Hester, who is a member of the diocese’s Committee on Scouting and a member of the executive board of the Boy Scouts Trapper Trails Council.

Scouts who belong to the council’s member troops take part in the event, which took place this year May 12.

The walk also helps emphasize the Scout oath, which promises duty to God, the deacon said.

At the final stop, Rabbi Ben Stern chanted the Ten Commandments in Hebrew from the synagogue’s Torah scroll.

“When someone reads Torah, the most important thing is to be accurate on their reading,” he said, and explained that generally on the Jewish Sabbath the person reading or chanting from the Torah uses a book rather than the handwritten scroll because the book is easier to read.

The book is held by a person other than the reader, and the person holding the book will correct the reader if there is a mispronunciation, Rabbi Stern said. “If you get something wrong, they have to stop you. It’s required.”

Rabbi Stern also answered questions such as why yarmulkes are worn, how long the Jewish worship services are, and the concept of kosher.

The night before the hike, the Scouts camped out at Marshall White Center Park. That evening, they heard from Charles W. Dahlquist II, the national commissioner of Boy Scouts of America and past Young Men general president of the Church of Jesus Christ of Latter-day Saints.

He urged those present to learn about the different faith practices they would hear about the next day “because understanding brings peace.”

Dahlquist was invited to speak to the gathering by Jacques Behar, a member of the National Jewish Committee on Scouting and president of the Ogden synagogue.

Some of Dahlquist’s closest friends are people of faiths different from his own, he said. “There is much more that joins us than separates us. We live in a time when we need to be joined more than ever before.”

Behar, who has been an adult Scout leader for 32 years, said in an interview that he is pleased young men of many faiths participate in the hike because afterward “it’s interesting to have them walk away and say, ‘Gee, I didn’t realize how close we all are.'”

Riley Crezee, an Eagle Scout from St. James the Just Parish’s Troop 293 who served as the master of ceremonies for the evening, said the opportunity the Ten Commandments Walk gives for Scouts to learn about different people’s faith is important, “especially today where everything is just very polarized. … I think that makes us better people as a society.”

NEXT: Medal of Honor recipient now advocates for vets with PTSD