Medal of Honor recipient now advocates for vets with PTSD 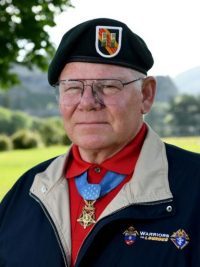 Captain Gary M. Rose is pictured in a May 20 photo in Lourdes, France. (CNS photo/Tamino Petelinsek, courtesy Knights of Columbus)

WASHINGTON (CNS) — Captain Gary M. Rose, awarded the Medal of Honor in 2017 for extraordinary heroism during the Vietnam War, now sees one of his most important personal missions as being an advocate for veterans suffering from post-traumatic stress disorder.

“Every person who’s been to combat or has had to clean up the mess from combat has got PTSD,” said Rose, a Catholic. “One of the things I’m really concerned about is the severity in some cases is such that there needs to be intervention.”

Rose said it is important for family members and friends of people exposed to combat to stay attuned to their behavior and intervene immediately upon noticing “little odd things” or unusual mood changes. Rose believes that forcing a person to talk can help save their life, even if it causes an argument.

“It’s better to have them mad at you than to have some very negative serious consequences resulting from the PTSD,” Rose said, emphasizing that PTSD can often lead to suicide.

Rose said combat survivors should feel that they are valued as individuals.

“The thing is, they’ve got to understand that they are important,” he said. “Their life is as important as any person that’s ever been born on this planet.”

Rose, now retired from the U.S. Army, is an active member of the Knights of Columbus based in Huntsville, Alabama. The former Green Beret became a 1st degree Knight around 1972.

Rose enlisted in the U.S. Army in 1967. As a Special Forces medic, he took part in Operation Tailwind, a secret mission in Laos in 1970. While surrounded and exposed to machine-gun fire, Rose treated nearly 70 wounded soldiers and is credited with saving the lives of most of them. He continued his military career and retired as a captain in 1987.

“I can tell you one thing about my service in the military. I have lifelong friendships based on my service. … They’re like brothers to me,” said Rose. “Every place that I have been stationed in the 20 years I was in the Army, I have left there with a lifelong friend.”

He said one place where a combat veteran can feel valued, talk to others and make lasting friendships is their local Knights of Columbus group. As a Knight, Rose said he is glad to be part of an organization devoted to improving people’s lives and helping surrounding communities.

“What I have found in the Knights of Columbus is a great network,” said Rose. “You’re associating not only locally but nationally and internationally with a whole bunch of great people.”

Rose said he has appreciated opportunities to participate in diverse initiatives such as assisting people in finding jobs, facilitating drop-offs to charity and supporting widows and families of members. However, for Rose, being a Knight is about more than just being Catholic.

“You’re in among good people. And I’m a firm believer in the fact that if you maintain relationships and friendships with good people, life is so much sweeter and so much better than if you’re not associating with good people,” said Rose. “That’s why I think the Knights of Columbus is so important.”

NEXT: New Vatican document on economy given high marks in U.S.