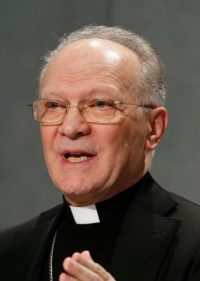 Archbishop Angelo V. Zani, secretary of the Congregation for Catholic Education, speaks at a news conference at the Vatican in this Jan. 29 file photo. (CNS photo/Paul Haring)

VATICAN CITY (CNS) — The changes in canon law Pope Francis made to ensure that marriage annulment cases were handled more quickly, more pastorally and with less expense mean that some changes should be made in the way church law is taught, said the Congregation for Catholic Education.

The new rules, which go into effect for the 2019-2020 academic year, require all students in what is known as the “first cycle” of studies for church licenses in theology to take at least three semesters of canon law courses, including at least one devoted exclusively to church law regarding marriage and the process of recognizing the nullity of a marriage.

The instruction also strongly encourages schools and faculties of canon law to offer courses designed for bishops, who have greater responsibility in determining the nullity of a marriage under the rules introduced by Pope Francis in 2015.

According to the canon law changes made by the pope, a bishop can issue a declaration of nullity after an abbreviated process. The possibility exists when: it is clear one or both parties lacked the faith to give full consent to a Catholic marriage; the woman had an abortion to prevent procreation; one of the spouses was in an extramarital relationship at the time of the wedding or immediately afterward; one partner hid knowledge of infertility, a serious contagious disease, children from a previous union or a history of incarceration; or when physical violence was used to extort consent for the marriage.

The Congregation for Catholic Education’s instruction also encouraged canon law faculties to offer some training to parish priests and staff who work with families so that they could provide basic information to couples who approach them asking about the possibility of an annulment.

Archbishop Angelo Vincenzo Zani, secretary of the Congregation for Catholic Education, told reporters at the Vatican May 3 that the congregation spent a year and a half doing a detailed analysis of existing faculties of canon law and it became clear that, “in general, the culture of law has diminished, been impoverished a bit.”

The Catholic Church as a community needs its legal framework, but it cannot be “just any law, but a law that responds as a service for the good of the church,” the archbishop said.

The instruction notes a worrying drop in the number of students of canon law, which it said does not bode well for the future. Also, it said, the number of professors of canon law is declining, and the situation is worsened by the fact that many of them are unable to teach and do research full time because their bishops require them also to serve on tribunals.

While the new instruction encourages universities with theology faculties, but no canon law faculties, to establish departments of canon law or, at least, to endow a chair in canon law, Archbishop Zani said the congregation also continues to be concerned about the concentration of specialized canon law studies in Rome.

The multiple faculties of canon law at pontifical universities in Rome duplicate each other, he said, while there are large areas of the world where it is almost impossible to specialize in church law.