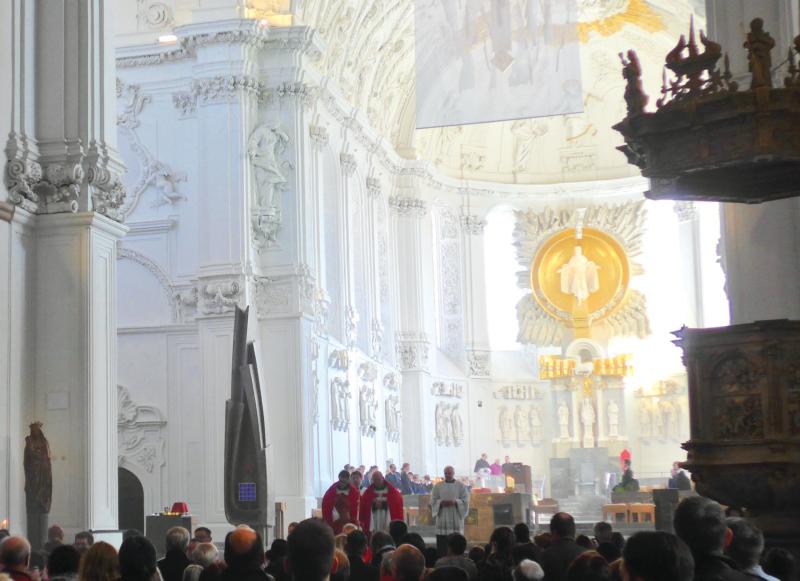 St. Kilian’s Cathedral in Wurzburg, Germany, is seen April 8, 2017. A cardinal’s refusal to celebrate Mass in a nearby city rekindled controversy over a newly ordained priest expelled from a Wurzburg seminary over Nazi sympathies. (CNS photo/Zita Ballinger Fletcher)

Swiss Cardinal Kurt Koch, president of the Pontifical Council for Promoting Christian Unity, canceled his participation in an upcoming Mass because one of the celebrants is a newly ordained priest with a history of alleged Nazi sympathies.

A spokesman for the Diocese of Wurzburg confirmed the reason for Cardinal Koch’s cancellation with Germany’s Catholic news agency, KNA.

Father Michael Polster, 30, was one of two seminarians expelled from a Bavarian seminary in 2013 due to alleged Nazi inclinations, racist remarks, and concentration camp jokes described then by German church officials as “totally unacceptable and unbearable.” Father Polster, ordained April 21 by Bishop Gregor Maria Hanke of Eichstatt, was scheduled to give his first blessing at the May 13 Fatima Feast Day Mass in the scenic pilgrimage town of Retzbach, about a 20-minute drive from Wurzburg.

An investigation launched by an ecclesiastical committee in 2013 established Polster was one of two Wurzburg seminarians who had performed the Hitler salute, made jokes about Nazi atrocities, and asked for a “(racial slur) to clean up” in the cafeteria, according to 2013 news reports by the German bishops’ conference and Suddeutsche Zeitung. The investigation heard testimony from 18 seminarians and 10 others.

The scandal dominated German media headlines five years ago, unleashed questions about a possible network of Nazi sympathizers in the Catholic Church, and prompted a strong letter to the seminary rector from the Wurzburg vicar general condemning Nazi rituals as intolerable behavior for future priests.

In an interview printed in Suddeutsche Zeitung in July 2013, Archbishop Ludwig Schick of Bamberg said, “I am exceedingly disturbed by anti-Semitic and racist utterances and tendencies, like the glorification of Nazi symbols and nationalism in our society — above all, when this happens in ecclesiastical places.”

Father Polster was expelled from the Wurzburg seminary after the investigation found him guilty of misconduct. After his dismissal, he sought admittance to a seminary in Eichstatt and was accepted.

He recently described his previous behavior to local media as “bockmist” (goat waste). In a March interview with Donaukurier, he denied having had Nazi sympathies at any point in his life.

“I do not have a maladjustment. I made a mistake in that particular situation,” Polster, then a deacon, told the press. “I hope that I have developed myself further so that such a thing never happens again.”

Bishop Hanke said he believes Father Polster has repented and asked the public to be respectful of him.

“He does not want to be an anti-Semite or a neo-Nazi. He has repented of what he was responsible for,” said Bishop Hanke.