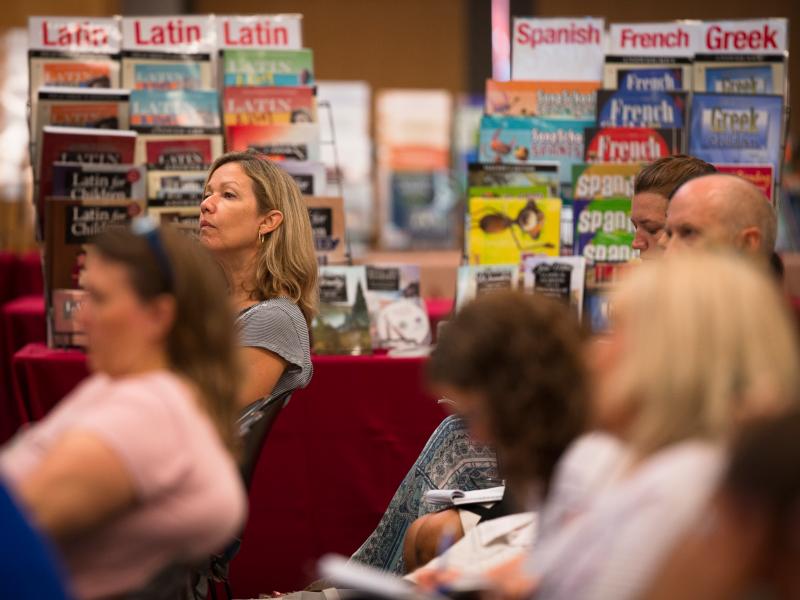 Educators attend a July 26 session at the National Catholic Classical Schools Conference at The Catholic University of America in Washington. (CNS photo/Tyler Orsburn)

WASHINGTON (CNS) — The National Catholic Classical Schools Conference met at The Catholic University of America to discuss what it means to educate from the heart of the church.

The July 23-26 conference, hosted by the Institute for Catholic Liberal Education, presented a vision of education as an all-encompassing field incorporating all aspects of human existence.

“We have to integrate everything because the world is integrated,” said Elisabeth Sullivan, the associate director of the Institute for Catholic Liberal Education.

Chris Weir, the institute’s vice president, talked about his work meeting with parents at his school and the concerns they would raise.

He said that, during their first meetings, the parents would have concerns about the practical matters — what classes were offered, how many AP classes there were, what sports the kids could play — but when the parents came back to talk to him later, the main thing they told him was that their kids were happy.

The road to this happiness, he said, is “better moral maps and better equipped guides,” phrases he drew from the work of Christian Smith, a professor of sociology at the University of Notre Dame who has studied the influence of religion on the lives of young people.

Weir drew on stories of raising his kids when explaining what it looks like for parents to be the archetypal educators. He said that he would give his very young children something and let them toy around with it to figure out what sort of thing it was. This method, he said, is at the roots of a liberal education.

“Nothing is more classical or liberal than presenting the truth and letting them grapple with it,” Weir said.

Seeing the parents as the first educators also means understanding that “school is fulfilling a secondary function,” he said.

“I find striking the amount of knowledge a parent gives a child before they ever get to a school setting. I don’t think any educator could match what a parent gives on that account.”

In her speech July 23, Sullivan talked about what it means to provide a liberal education.

“We do this because we want to be free in Jesus Christ, and we want the liberty to be free from ignorance, manipulation, and our own self-interest.”

She attacked current secular education for “having drifted from the cultivation of wisdom and virtue.”

“We have more in common with Aristotle and Plato and other ancient pagans than with modern secular educators,” she said. “Unlike the secular world, we don’t believe in only the natural world. Every Catholic school understands that we have a divine goal.”

Sullivan said that one concrete way this manifests itself is in understanding the value of memorization and imitation.

“To learn something, you have to think it into your own understanding,” she said, and modeling and guiding students in how to ask questions, how to think, and how to discover truth allows them to do it themselves.

“An art arises only when imitation is joined with reason, and we’re imitators who don’t understand the powerful degree to which this is part of our nature,” she said.

But imitation, she said, is only one part of what a Catholic liberal education should be.

“As Catholic educators, we have to cultivate eyes to see and ears to hear the connectedness and unity of all things in Christ.”