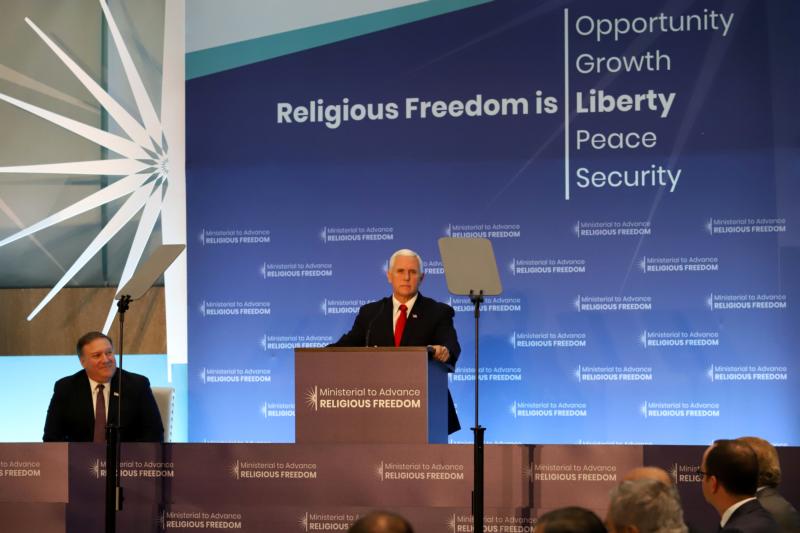 U.S. Secretary of State Mike Pompeo and Vice President Mike Pence appear July 26 at the Ministerial to Advance Religious Freedom at the State Department in Washington. The July 24-26 event was sponsored by the State Department. (CNS photo/Alex Wroblewski, Reuters)

WASHINGTON (CNS) — In a speech at the Ministerial to Advance Religious Freedom, Vice President Mike Pence described the state of religious freedom around the world and the wide variety of attacks it faces.

He mentioned several of the guests in attendance who had been the subjects of religious persecution in their home countries.

“The list of religious freedom violators is long; their crimes and oppressions span the width of our world,” he said July 26 in Washington. “The victims of religious persecution face economic sanctions. They’re often arrested and imprisoned. They’re the target of mob violence and state sanctioned terror. And all too often, those whose beliefs run counter to their rulers face not just persecution but death.”

The first individual target of religious persecution Pence mentioned was Father Raul Zamora of Nicaragua, whose church was besieged by the government of Daniel Ortega. In the siege, during which over 200 students sought shelter at the church, two students died, adding to a death toll of over 350 this year in Nicaragua.

After telling Father Zamora’s story, Pence said, “Our prayers are with you, and the people of America stand with you for freedom of religion and freedom in Nicaragua.”

Pence then discussed religious freedom violations in China and mentioned that Kusho Golog Jigme, a Tibetan Buddhist monk who had been jailed and tortured after speaking out against Chinese rule in Tibet, was in the audience.

The vice president said that, in addition to Buddhists, Muslims, especially the Uyghurs in the northwest of China, and Christians also face persecution in China.

“But for all of China’s abuses, their neighbor in North Korea is much worse,” Pence said.

“North Korea’s persecution of Christians has no rival on the earth. It is unforgiving, systemic, unyielding and often fatal. The mere possession of a Christian Bible is a capital offense.”

Pence then described the ordeal of Ji Hyeona, a North Korean who was imprisoned and tortured for having a Bible and forced to abort her unborn child after a failed escape attempt.

“Hyeona was lucky enough to escape with her life, and we are honored to have you with us today,” Pence said.

Pence then described the ongoing persecution of Jehovah’s Witness in Russia and minority religious groups in Iran, where, he said, “in 2016 alone, 20 Sunni Kurds were executed for the crime of allegedly ‘waging war against God,’ simply for practicing their faith.”

Pence also attacked “the barbarism and the violence committed by the terrorists of ISIS and the magnitude of their acts.”

He told the story of Nadia Murad, who is Yezidi.

“Four years ago, the butchers of ISIS entered her village and slaughtered more than 600 Yezidi men and boys, including six of Nadia’s brothers and stepbrothers. Then they stole Nadia away and all the young women and subjected them to the most degrading form of human slavery.”

“The United States of America, I promise you, will always call ISIS brutality what it truly is: It is genocide, plain and simple,” said Pence, who later in his speech announced, effective that day, establishment of the Genocide Recovery and Persecution Response Program by the U.S.

Pence mentioned Pastor Andrew Brunson, an American pastor in Turkey arrested in 2016 as “part of a massive crackdown following a failed coup attempt.”

“Pastor Brunson was imprisoned without being charged for more than a year. And when the Turkish government finally indicted him, they accused him, allegedly, of ‘dividing and separating’ Turkey by simply spreading his Christian faith,” Pence said.

The Turkish government released Brunson from prison and put him under house arrest the day before Pence gave his speech, a step which the vice president described as “not good enough.”

Pence also described attacks on religious minorities in free societies, where they arise “not from government persecution but from prejudice and hatred.”

He described an increase in hate crimes against Jews in England, Germany and France, where “things have gotten so bad that Jewish religious leaders have warned their followers not to wear kippahs in public for fear they could be violently attacked.”

In an event related to the ministerial, Rep. Chris Smith, a Republican from New Jersey, gave a speech focusing on “the horrible religious freedom abuses occurring in democratic India.”

He spoke at a reception hosted by the Religious Freedom Institute and the 21st Century Wilberforce Initiative in advance of the State Department’s July 24-26 ministerial.

“I am very concerned that India is losing Gandhi’s vision of peaceful coexistence between the Hindus, Muslims, Christians, Sikhs and other minority religions,” Smith said.

He expressed concern that, in place of that vision, the idea that national unity requires religious unity was becoming more prevalent.

“In at least 10 Indian states, minority religions are being marginalized, harassed, intimidated, and killed — with impunity — by mobs whipped into a frenzy by fake news on social media.

“I’ve also learned in private testimony that as many as 100,000 girls — the ‘jogini’ — are believed to be trapped in temple prostitution. Although it is technically against the law, these disadvantaged and very young Dalit girls, are forced into a life of sexual servitude and disease in their local temple — eventually ending up in the brothels of the big cities.”

He called upon the Indian government to end these abuses and the Trump administration to address these problems.

The reception where Smith spoke marked the 20th anniversary of the International Religious Freedom Act of 1998.

Smith sponsored the 2016 Frank R. Wolf International Religious Freedom Act to expand on the earlier law and create new tools for the State Department to use to fight extremism and religious persecution around the globe.

NEXT: Conference examines what it means to educate from heart of the church