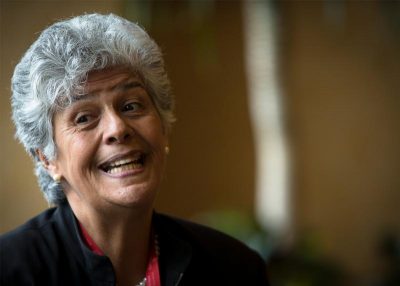 WASHINGTON (CNS) — As the world Synod of Bishops unfolds at the Vatican, thousands of faithful pilgrims get ready to witness the Oct. 14 canonization of Blessed Oscar Romero, along with Blessed Paul VI and five other new saints.

Among those preparing for the pilgrimage to Rome is Mercy Sister Ana Maria Pineda, a theologian, professor and author who has researched and studied the life and legacy of Blessed Romero, an archbishop and martyr who spoke up on behalf of the poor and vulnerable during El Salvador’s civil war.

“He was one of the most consciously followers of Jesus, he knew what that meant, and he knew what he was called to do,” Sister Pineda said in an interview with Catholic News Service.

Archbishop Oscar Arnulfo Romero was fatally shot while celebrating Mass at a chapel in a hospital March 24, 1980. Three years earlier, in 1977, Blessed Paul named him the archbishop of San Salvador, which provided him a national platform to speak out in defense of the poor and against the violence and oppression attributed to the government at the time. He was beatified by Pope Francis in 2015.

He is considered an iconic figure and his legacy advocating for human rights is admired around the world. However, Sister Pineda advises not to see him as a superhero, but as a bright man with flaws and limitations. He was timid and at times felt insecure, and struggled with impatience and a bad temper.

But he also was a man who lived out the Gospel, sought God’s will, and lived his Christian commitment to the ultimate consequence: martyrdom, she said.

“He had human limitations like all of us have, so it’s a beautiful thing to see how he keeps making the effort every moment of his life to try and respond to what God was asking of him, and to try and do it as a better person.”

He was a complicated figure in society and the church in El Salvador, Sister Pineda pointed out. And he often received criticism from some sectors in society, the government, and the church.

Sister Pineda concurred that there is a need to continue studying Blessed Romero’s legacy. “His homilies are densely filled with a lot of the church’s teachings, Scriptures, and all that can still continue to teach us more, so there has to be more work done,” she said.

Blessed Romero wrote his homilies with three levels in mind. He described the reality of what was happening at the time, the reflection of the word of God, and the application of what that would mean at the time, she added.

His life’s journey led him to live out the mystery of the cross, where he as a pastor of a “suffering church” would share in the suffering, Sister Pineda said, adding that anyone can relate to his experiences even amid suffering.

“What I find consoling is that he is like I might be, a human being with frailties. But it teaches me something: that you try and work with it and you try to walk ahead, and that God helps you, God is with you and that you can overcome some of those personal difficulties. And you see it in his life, he becomes a martyr,” although not by his own choice, she said.

“He was afraid of death, I don’t think he went out to embrace death, but he knew that this could be the consequence of living out the truth, the Gospel’s truth.”

And even during his most difficult times, days before his death, Blessed Romero’s prayers showed abandonment to God’s will and embracing his cross.

“Because he had a sense that he was going to be killed or he was in danger, (he prays to God) ‘if it happens to me, please be with me. And at the last moment, could I feel your embrace to help me at that moment,'” said Sister Pineda.