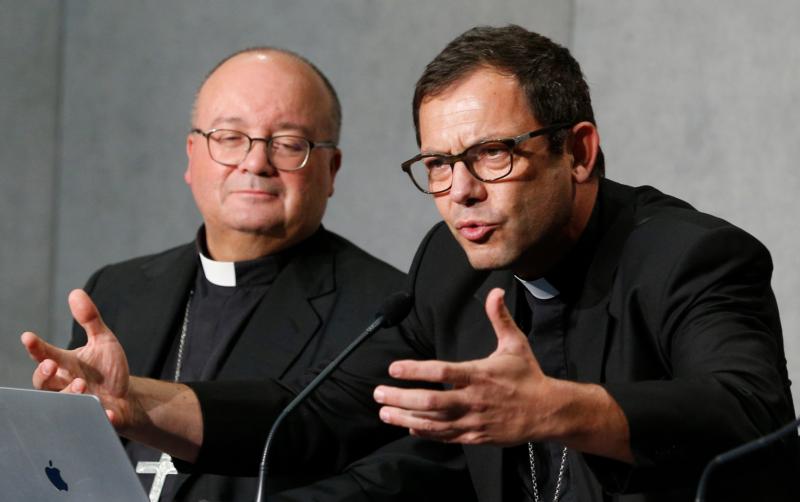 Auxiliary Bishop Emmanuel Gobillliard of Lyon, France, speaks at a news conference to discuss the Synod of Bishops on young people, the faith and vocational discernment at the Vatican Oct. 8. At left is Archbishop Charles Scicluna of Malta. (CNS photo/Paul Haring)

When he speaks with survivors, “I find a great thirst and a great hunger for justice, which I share,” he told reporters at a synod briefing Oct. 8.

A longtime abuse investigator — in the past for the Congregation for the Doctrine of the Faith and more recently at the request of Pope Francis — the archbishop was attending the Oct. 3-28 Synod of Bishops on young people as archbishop of Malta.

As an abuse investigator, he said his role is to help the church understand what the truth is and to help bring justice.

“What pains me is the fact that sometimes justice takes an amount of time that is a bit excessive. And this is a problem that very much pains Pope Francis,” he said, referring to how slow the process is.

When he speaks with a person who has experienced abuse, “there is little to say. I prefer to cry with them as has happened to me many times.”

But the initial mourning and silence are followed by “an enormous thirst for truth and justice, which is not incompatible with mercy because we all need mercy,” he said, but not a “hollow mercy” that does not respect the truth.

As the head of an archdiocese, he said his role as bishop demands he be a father to both an accused priest-perpetrator and a victim. “This is a tragic rift, a split for a bishop,” he said.

But “finding the truth is essential,” he said, which is why he turns to the help and advice of lay experts to lead the investigation and offer their suggestions to avoid letting his own subjective feelings skew the process and let him “serve the truth” and his people.

When asked whether the need for greater accountability of bishops was being discussed at the synod, Archbishop Scicluna said he was not aware of any direct discussion happening on the topic, but that accountability would be a topic at the world meeting on abuse prevention the pope called for Feb. 21-24.

What has been getting mentioned in every working group at the synod, he said, is the general problem of abuse and the need for safeguarding. Because of this ample concern, the final synod document “will have to find probably more space” dedicated to these issues than the one paragraph item (66) that was dedicated to abuse in the synod’s working document.

If a “good representation of the 260 bishops from all over the world” attending the synod tell Pope Francis they have the same desire “to go from beautiful words to action, he is obviously empowered to do what he really wants for the church and that is to make the church a safer place and to get different cultures and different conferences of bishops to implement what is now policy in the church,” he said, referring to a 2011 circular letter asking every bishops’ conference in the world to develop guidelines for review.

“Now from the documents we need to go to the grass roots, to empower people to disclose abuse, but also to raise the threshold of accountability” so that it includes bishops, said Archbishop Scicluna, who is also president of a board of review handling abuse cases within the Congregation for the Doctrine of the Faith.

Speaking through a translator, Auxiliary Bishop Emmanuel Gobilliard of Lyon, France, told reporters, “It is better for the sin to be revealed rather than remaining hidden” because it not only helps victims by recognizing what has happened, it can lead to accountability and reform.

Young people want the church to be safe, he said, and it is important to them that the priests and workers who are accompanying them are also being accompanied in their life and supported with ongoing formation.

Bishop Gobilliard spoke to the synod about the importance of open discussion about human sexuality and the need for sexual education, including for seminarians because young people “expect a true answer” about the body.

Sexual education is important because of “the beauty of sexuality that God gave us,” he told reporters, and the scandals of abuse should not push people to be silent about sexuality. “It is something that is beautiful that should not be idealized nor rejected,” he said.

In response to those who have left the church because they see the hypocrisy of how “you say one thing and you do the opposite. Shame on you,” the archbishop said, “I think I need to say, ‘Yes, you’re right, shame on us.'”

“I think there is no other way to the heart of a human being who has been scandalized than true humility and penance and also silence,” he added.

However, Archbishop Scicluna said he sees with his own eyes many holy priests doing good work and performing “miracles” every day as they help people change their lives by bringing them closer to Christ.

“This does not get the headlines” while the scandals or accusations do, he said, saying, “A tree that falls creates more sound than a forest that is growing.”

PREVIOUS: Migration should be a choice, not forced, says cardinal