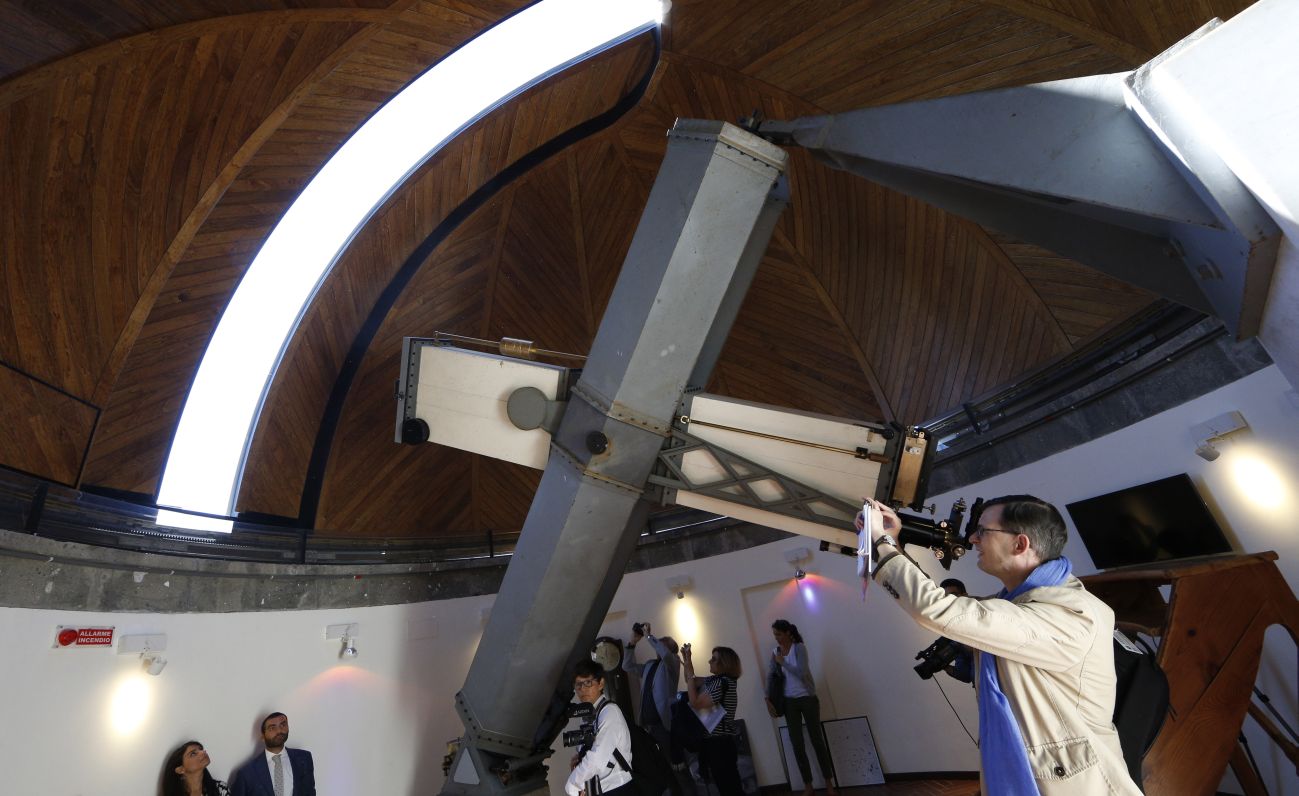 A journalist takes a photo of the 1891 Carte du Ciel (Celestial Map) telescope during a tour for journalists of the Vatican observatory at the papal villa at Castel Gandolfo, Italy, Sept. 28. The telescope was used by the Vatican for its part in an international survey of the night sky. (CNS photo/Paul Haring)

VATICAN CITY (CNS) — When people ask why the Vatican has an observatory, one Jesuit priest says it’s because it cannot afford a particle accelerator.

The nerdy quip by the Vatican Observatory’s vice director, Jesuit Father Paul Mueller, has become his signature response to people’s inevitable surprise when they discover that popes have stockpiled telescopes, and the church does not oppose science — even if it won’t buy a 16-mile long, multibillion-dollar particle accelerator.

Eleven Jesuit astronomers live, work and pray together year-round as they conduct top-notch research either at the modern Mount Graham International Observatory in Arizona or at their historic headquarters on the grounds of the papal summer villa and gardens in Castel Gandolfo near Rome.

“Science is part of our life; for us there is no conflict, no tension” with their Catholic faith and religious vocation, said Father Mueller, a U.S. priest who has degrees in physics, history, philosophy and theology and a doctorate in the history and philosophy of science.

He spoke to Catholic News Service Sept. 30 during a Vatican-led tour of the observatory’s facilities at the papal villa.

Reporters were treated to a full tour of the four observatory domes and telescopes housed in two separate buildings — one being the papal summer residence itself with a stunning view of Lake Albano below and the other being a newly refurbished building nestled within the wooded gardens.

The recently renovated facility houses the now fully restored Carte du Ciel (Celestial Map) telescope from 1891, a Schmidt telescope from 1957 and a new exhibit showcasing a number of historical scientific instruments, artifacts and meteorites from the observatory’s collections.

The plan is to open the unique space to the public starting in the summer 2019 with visits organized by the Vatican Museums.

Father Mueller said one idea would be to have groups tour the villa’s garden, have dinner and then open one of the observatory domes for a night of stargazing. The Vatican Museums already organize special tours of the papal villa and gardens at Castel Gandolfo.

While the details and starting dates of the star-watching tour still have to be worked out, Father Mueller said it will offer a great way to make the historical treasures, work and achievements of the Vatican Observatory more “public and visible.”

The observatory traces its origins back to an observational tower erected at the Vatican by Pope Gregory XIII in 1578 in preparation for reforming the Western calendar. Over time, a number of posts for celestial observation were set up along the Vatican walls and elsewhere in Rome, such as atop the church of St. Ignatius where Jesuit Father Angelo Secchi — the father of astrophysics — conducted much of his work.

Pope Leo XIII formally established the Vatican Observatory — placed on a hillside behind the dome of St. Peter’s Basilica — in 1891 as a visible sign of the church’s centuries-old support for science.

The pope’s main observatory, by now entrusted to the Jesuits, was eventually moved to the papal summer residence in Castel Gandolfo in 1935. Two observational domes were built on the top of the pope’s summer villa to house two Zeiss telescopes purchased that year.

The Carte du Ciel telescope was moved in 1942 from the Leonine Tower in Vatican City to the papal villa and, in 1957, it was joined by a Schmidt wide-angle telescope that Pope Pius XII purchased with his own money as a gift to the observatory, astronomer Jesuit Father Gabriele Gionti told reporters.

The Jesuit observatory staff set up a second research center in Tucson, Arizona, in 1981 after Italian skies got too bright for nighttime observation. And in 1993, in collaboration with Steward Observatory, they completed the construction of the Vatican Advanced Technology Telescope on Mount Graham — considered one of the best astronomical sites in the continental United States.

Visitors who participate in next year’s sky-watching tour at the papal gardens are expected to use what Father Mueller called “the jewel” of their observatory — the Carte du Ciel telescope. It was purchased after Italian astronomer and meteorologist, Barnabite Father Francesco Denza, easily convinced Pope Leo in the late 1800s to let the Holy See take part in an international survey of the night sky.

The Vatican was one of about 18 observatories around the world that spent the next several decades taking thousands of glass-plate photographs with their telescopes and cataloging data for the massive project. Sisters of the Holy Child Mary Emilia Ponzoni, Regina Colombo, Concetta Finardi and Luigia Panceri helped map and catalog nearly half a million stars for the Vatican’s assigned slice of the sky.

A space systems consultant engineer and associate member of the observatory, Claudio Costa, oversaw the telescope’s recent restoration. He was the last person to use the historic telescope before it fell into disuse in the 1980s and he was the first to use it after restorers got it fully functioning again.

Soon, the staff hopes it will be the public’s turn to peek through this piece of history and view the heavens in a whole new way.

“When we use the telescopes to examine the heavens, that’s a kind of worship,” Father Mueller said.

Science, he said, is searching for the truth, which exists in “two books: the book of Scripture and the book of nature.”

While people may struggle to make sense of what they see, in the end, the priest said, “the truth is one, (the books) cannot disagree because God is the author of both books.”

NEXT: Toronto doctors lay out procedures for euthanasia for children