Josephites mark 125 years of ministry and celebrate a ‘resilient faith’ 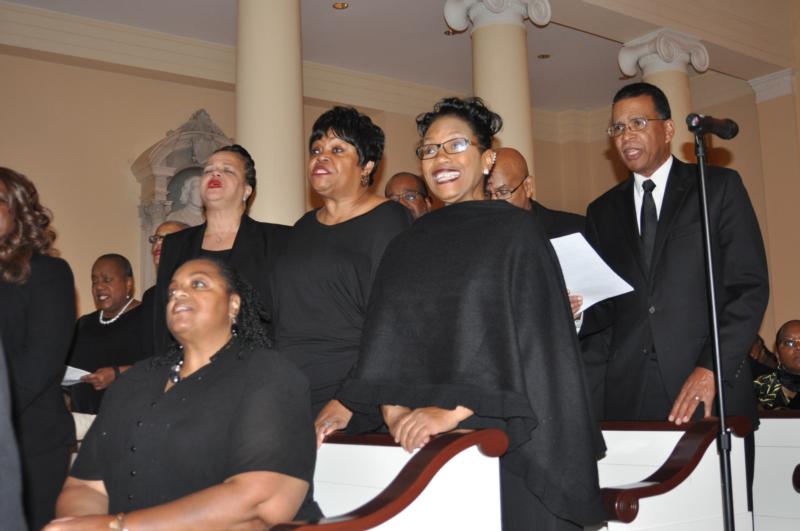 A gospel choir made up of members of several Josephite parishes sings at the Basilica of the National Shine of the Assumption of the Blessed Virgin Mary in Baltimore Nov. 17 during a Mass celebrating the 125th anniversary of the Josephites. (CNS photo/George P. Matysek Jr., Catholic Review)

BALTIMORE (CNS) — Inside a luminous cathedral where many of their ancestors historically attended Mass segregated in a rear balcony, hundreds of African-American Catholics from across the country filled every pew of the Basilica of the National Shrine of the Assumption of the Blessed Virgin Mary in Baltimore Nov. 17.

Joining men and women from many different backgrounds, they gathered to celebrate the 125th anniversary of the founding of the Josephites, a society of priests and brothers established in Baltimore to minister to the African-American community.

It was a jubilant celebration not only of the dedicated ministry of the Josephites, but also of the people they have served for more than a century.

“Today, we come to celebrate resilient faith,” the Josephites’ superior general, Father Michael Thompson, said in a 30-minute homily that inspired applause and a few shouts of “Amen!” and “Tell it!”

The mission of the Josephites, formally known as the Society of St. Joseph of the Sacred Heart, was never easy, Father Thompson said.

After the Civil War, he said, the Catholic Church struggled caring for the spiritual needs of some 7 million persons of African descent, many of them former slaves.

“They were faithful to their God, yet poor, uneducated and suppressed by evil and cruel treatment,” Father Thompson said.

Although they lacked manpower and resources, Father Thompson said, the Josephites remained committed to their mission. They received support from St. Katharine Drexel, a wealthy Philadelphia heiress and founder of the Sisters of the Blessed Sacrament, who spent much of her fortune to purchase land for Josephites to build churches and schools. 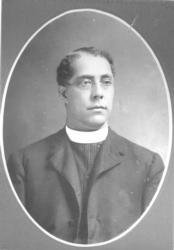 Josephite Father Charles Uncles, who grew up at St. Francis Xavier in Baltimore, was the first African-American to be ordained to the priesthood on American soil. (CNS photo/courtesy Josephites)

Many other women’s religious communities, including the Baltimore-based Oblate Sisters of Providence, also helped in the Josephite mission, he said.

Father Charles Uncles, a former parishioner of St. Francis Xavier in Baltimore, was among the four founding Josephites. He became the first African-American ordained to the priesthood on American soil when Baltimore Cardinal James Gibbons administered the sacrament of holy orders in 1891 at the Baltimore Basilica, an event that attracted national attention and coverage from The New York Times.

“It was something unfathomable,” Father Thompson said, noting that many blacks came to witness the historic ordination. “They came with excitement because if we can ordain one, they knew there would be many to follow.”

(Father Augustus Tolton, the first recognized U.S. diocesan priest of African descent, was ordained in Rome in 1886 for ministry in Illinois.)

In welcoming guests to the Josephites’ anniversary celebration, Baltimore Archbishop William E. Lori said he considered himself an honorary Josephite. When he was a deacon and a young priest, he served at Josephite parishes in the Archdiocese of Washington.

“Please know that your enthusiastic presence brings great joy to this basilica and to the whole church,” Archbishop Lori said.

During the liturgy, which took place during National Black Catholic History Month, a gospel choir made up of parishioners from a variety of Josephite parishes led the congregation in song. More than 200 members of the Knights and Ladies of Peter Claver were also present for the celebration, including an honor guard.

During a banquet at the Baltimore Convention Center following the Mass, Supreme Knight James Ellis of the Knights of Peter Claver announced that in honor of the Josephites’ anniversary, the Knights plan to sponsor a scholarship for Josephite seminarians.

The Knights were founded by the Josephites more than a century ago in Alabama to provide a Catholic fraternity for black men who were denied admittance to other such groups.

For much of their history, the Josephites have been known for their commitment to social justice. They participated in the civil rights struggle and encouraged black Catholics to take leadership roles in the church.

St. Augustine High School in New Orleans, founded by the Josephites, won a legal battle in 1967 that led to the desegregation of Louisiana high school sports. Following the unrest in Baltimore after Freddie Gray died from injuries sustained while in police custody in 2015, the Josephite parish of St. Peter Claver became the epicenter for a cleanup effort in the days following the riots.

In an interview with the Catholic Review, the media outlet of the Baltimore Archdiocese, Bishop Ricard said he was inspired to become a Josephite priest while growing up in the Jim Crow South.

The first African-American bishop in the Archdiocese of Baltimore, he is the retired bishop of Pensacola-Tallahassee, Florida.

“I saw these as unselfish men who served the African-American community, often at the risk of ostracizing themselves from other priests and other Catholics,” said Bishop Ricard, who was raised in Louisiana. “They lived in the same community we lived, and they shared our values, our aspirations, our dreams and were very supportive of what we were trying to do.”

The Josephites have worked to encourage religious vocations from the African-American community to ensure that “everybody receives God’s care and love,” Bishop Ricard said.

St. Joseph’s Seminary, where Bishop Ricard now serves, was originally located in Baltimore and was the first seminary in the country to educate both black and white candidates to the priesthood. After the restoration of the permanent diaconate following the Second Vatican Council, the Josephites also were at the forefront in educating new deacons.

Since the 1990s, the Josephites have been reaching out to Africa to encourage Africans to consider ministry in the United States with the Society of St. Joseph of the Sacred Heart. The Josephites now run a house of formation in Iperu-Remo, Nigeria.