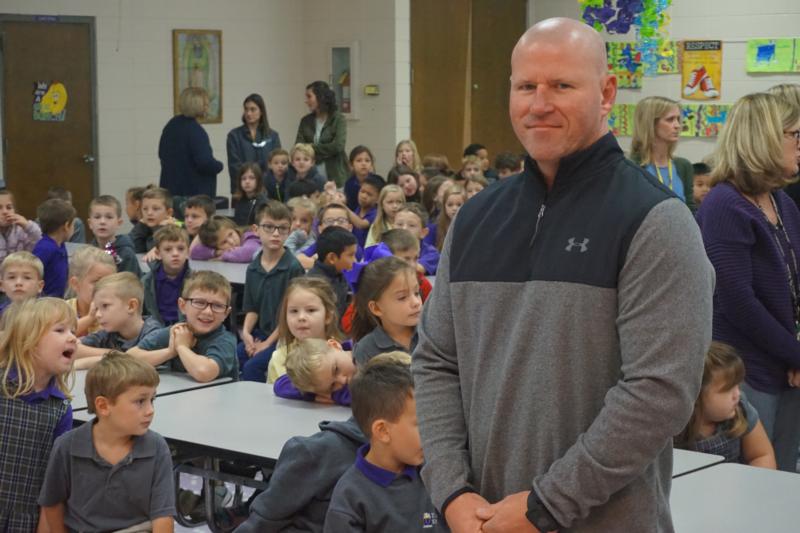 Bradley Fornash, resource officer at St. Joseph School in Conway, Ark., poses with elementary students during a brief assembly Nov. 5. Fornash, retired from the Conway Police Department, was hired by the school in August. "I feel like there's more responsibility here than there actually was at the police department, because there's so many kids I feel like I have to keep them safe." (CNS photo/Aprille Hanson, Arkansas Catholic)

Bradley Fornash, resource officer at St. Joseph School in Conway, Ark., poses with elementary students during a brief assembly Nov. 5. Fornash, retired from the Conway Police Department, was hired by the school in August. “I feel like there’s more responsibility here than there actually was at the police department, because there’s so many kids I feel like I have to keep them safe.” (CNS photo/Aprille Hanson, Arkansas Catholic)

CONWAY, Ark. (CNS) — For 20 years, Bradley Fornash worked at the Conway Police Department, including 17 years as a hostage negotiator and 13 as a detective.

Today, it’s less about diffusing life or death situations and more about solving conflicts. Instead of investigating crimes, he’s monitoring the playgrounds. Rather than interrogating criminals, he’s a mentor to students who need it.

“I feel like there’s more responsibility here than there actually was at the police department, because there’s so many kids I feel like I have to keep them safe,” Fornash told the Arkansas Catholic, newspaper of the statewide Diocese of Little Rock.

“But I get to spend more time going to church, because we go to church on Wednesdays,” he said. “I try to go by the adoration chapel every day because I’m here. I think just being here on campus with the kids, with the church environment it has made me stronger in my faith.”

He’s been a member of St. Joseph Church in Conway for 20 years and his son Aidan, 9, is a fourth-grade student at St. Joseph. Fornash retired from the police department in July and “jokingly” suggested to Courtney Pope, principal at St. Joseph Elementary School, that they should “just hire me to help out.”

“Last year they had some break-ins and some things that happened,” Fornash said, including $5,000 worth of iPads, Chromebooks and a charging station stolen last spring break. “I worked the cases.”

The joke soon became a real conversation with high school principal Diane Wolfe, who was on board from the beginning. Pope said Fornash was perfect for the job because he already knew the culture of the school and parish.

“He’s a great person for this job because of his leadership, his compassion for kids, his willingness to jump in, change wherever we need him,” she said. “He has a child here, it matters to him. It’s not just his job.”

His duties vary throughout the day, from walking about seven miles a day or riding in a golf cart around the perimeters of the school buildings, assisting with pick-up and drop-off at the elementary school, monitoring recess for elementary and middle school students, and being present at lunch for middle school and high school students.

He was instrumental in getting a gate to regulate traffic by the elementary school for safer school drop-offs and requesting a radio, which other area schools also inquired about following his lead, that connects him immediately to city dispatch if there were an emergency.

Fornash also has sat in on some parent meetings because “I’m good at de-escalating situations.”

“It’s just resolving conflict,” he said, adding that with students, “if they’re not being truthful, I’m pretty good at picking up on that.”

Pope said his versatility and willingness to help in any way has been a positive.

“I can call him after hours and run something by him and he truly thinks about it, all scenarios, and sometimes he’ll say, ‘I’m not sure, let me think about it and get back to you.’ So he’s very reflective and makes the best decisions for our school,” she said.

While his job duties continue to evolve, Fornash has made it a point to provide more safety programs for students. He’s helped bring in both officers and a judge to speak on internet and phone safety, drugs and on Nov. 5, the school’s first Conway SWAT-led intruder safety training.

“He sees things differently than I do, I’m an educator,” said middle school principal Matthew Tucker. “So I don’t see it as he does. He’s already seen a few things that he’s brought to the parish’s attention and the school’s attention. He’s been a great asset in terms of talking to Conway fire, Conway PD. There was communication before, but it’s so seamless now.”

It has been tough for some students to shed the notion that Fornash is no longer an “officer” in the police sense of the word, but they are warming up to him thanks to his commitment to approachability, even weightlifting with student athletes on occasion.

He said there are a few “I talk to on a regular basis that need guidance” and if more is needed, he’ll refer them to the school counselors.

“I’ve explained to them I left my job as a police officer. I’m a retired officer. I’m not here to arrest you, put you in jail. I’m here to help keep you safe and to help you. I’m not here to get you in trouble,” he said. “When I retired, I don’t arrest people. They’re kind of seeing that now.”

Hanson is associate editor of the Arkansas Catholic, newspaper of the Diocese of Little Rock.

NEXT: Josephites mark 125 years of ministry and celebrate a ‘resilient faith’