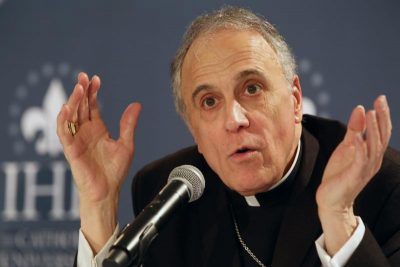 WASHINGTON (CNS) — A panel of academics at a Feb. 6 conference on the clergy sex abuse crisis noted that the current crisis is not the first scandal to confront the church, and that the church has had trouble putting those scandals to rest.

The clergy has had “the power to correct themselves,” said Carlos Eire, a professor of history and religious studies at Yale University, “but throughout all of this time, that power has been used very unevenly and ineffectively.” Reform is a constant in church history, he added, because “corruption is a constant in human history.”

Eire was one of three panelists at the second in a series of programs called “Healing the Breach of Trust” at The Catholic University of America in Washington. The Feb. 6 program was subtitled “The Role of the Laity in Responding to the Crisis: Theological and Historical Foundations.” It was sponsored by the university’s Institute of Human Ecology.

Even though Christianity had been given official status by emperors, church leaders still sought a way to “immunize” the church from secular law. There were “Caesars of all sorts, whose intentions conflicted with Christian authority,” Eire said. One negative, he added, was that by immunizing itself from civil authority, it also immunized itself “from all the laity.”

“This is like shining a light on a big mess,” he said.

In 1170, King Henry II of England was upset over 100 priests whom he said had committed murders, while some priests had mistresses and children, yet the church “wanted to try priests in their own courts and not those of the crown,” Eire said. “(St. Thomas Becket’s) efforts to impose clerical dress or to have priests foreswear concubines were unsuccessful,” he added, although St. Thomas Becket, who was archbishop of Canterbury, “didn’t try too hard,” either, he noted.

On Christmas Day, St. Thomas Becket excommunicated bishops who took King Henry’s position. The king, livid, uttered the long-remembered statement, “Who will rid me of this meddlesome priest?” Four of the king’s knights took that remark as an invitation and murdered the Canterbury archbishop. Despite the context of his martyrdom, the people insisted, Eire said, on “santo subito” — immediate sainthood; he was canonized just three years later, in 1173.

Eire said the case resonated so strongly that in 1540, “Henry VIII, who took over the church, ordered Becket’s bones to be destroyed and all mention of his name obliterated.”

Another faceoff took place in France between Pope Boniface VIII and King Philip IV, when the king wanted to tax churches. The pope “made a number of pronouncements” to prolong the dispute, Eire said, one of them being, “If the earthly power errs, it shall be judged by the spiritual power. But if the spiritual power errs, it shall be judged only by God.”

“Clerical courts worked sometimes, but most of the time they did not,” Eire said. “With this clerical class, resentment kept growing and growing, as there was more literacy and more money, and a growing merchant middle class.”

That dynamic helped bring about the Protestant Reformation, said Michael Root, a systematic theology professor at Catholic University. Martin Luther held, “If the pope and the bishops were not up to the reform of the church, then it was the laity that must who do so,” Root said. “By laymen, he meant the rulers. … You had a church started in many ways by the state.”

Root said the worry of “Protestantization,” or lay control of church matters, has surfaced by it “piggybacking on the sex abuse crisis.” He noted it also has antecedents such as angered lay church trustees who establish parishes only to see bishops wrest control from them.

Lay influence, though, manifested itself in many ways. “The Hapsburgs could submit names of people they would not want to be pope,” Root said, a practice not revoked until Pope Pius X.

“For Luther, every Christian participates in Christ’s three offices (of prophet, priest and king) in much the same fashion,” Root said. “The distinction between clergy and laity are that of functions and roles,” he added, since “for the good of the church, somebody needs to be given the responsibility for leading the church’s worship,” and other duties.

“In extreme situations,” Root said, “the laity can remove clerical leaders and replace them and, in extreme cases, even substitute for them.”

Such is not the case in Catholicism due to a different theological understanding of the priesthood. “The laity cannot substitute for the priest,” Root said. “If you don’t have an ordained priest, you don’t have a Mass.”

The church, though, has not handled well its role, Root said. “Referring to the church as a monarchy is a mistake” dating back to the Reformation, he added, as well as references to the laity along the lines of “pay, pray and obey” and that the two rightful positions of the laity are “sitting before the pulpit and kneeling before the altar.”

Benedictine Sister Nancy Bauer, a Catholic University theology professor, suggested that Canon 212 “is a powerhouse” when conferring rights upon the laity to take an active role in the abuse crisis.

It says, in part: “According to the knowledge, competence and prestige which they possess, they have the right and even at times the duty to manifest to the sacred pastors their opinion on matters which pertain to the good of the church and to make their opinion known to the rest of the Christian faithful without prejudice to the integrity of faith and morals, with reverence toward their pastors, and attentive to common advantage and the dignity of persons.”

Reverence is key part of that canon, Sister Bauer said: “Outrage may generate a reaction but not necessarily reform.”

Canon 215, which give the faithful the right to form associations — even without the blessing of the bishop — is important as well. The right of association “is a human right,” Sister Bauer said.

While not offering an endorsement of the group, she said Voice of the Faithful, which started in 2002 in response to the sex abuse crisis in the Archdiocese of Boston and now claims 30,000 members, is an example of how the laity can utilize Canon 215.

While synods and pastoral councils give an opportunity for the laity to make their opinion known to bishops, and laypeople filling parish and diocesan leadership roles also are helpful, Sister Bauer said, “the most powerful person is the person who answers the phone for the bishop and decides who talks and doesn’t talk to him, and manages the schedule and determines who gets to see him and who does not.”

NEXT: Wounded warriors are HEROs combating ‘epidemic’ of child pornography