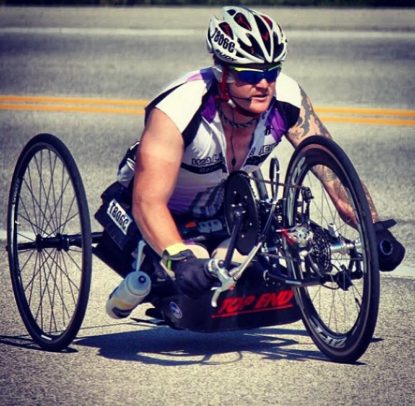 Justin Gaertner, a former Marine who lost both his legs while sweeping for bombs on his third deployment in Afghanistan, is pictured in an undated photo. Gaertner now has a new mission as a “human exploitation rescue operative,” or HERO, with the Department of Homeland Security, pursuing predators who collect and trade child pornography on the internet. (CNS photo/courtesy Justin Gaertner)

WASHINGTON (CNS) — As a result of losing both legs while sweeping for bombs on his third deployment in Afghanistan, Justin Gaertner could no longer serve as a Marine.

But he found a new mission as a “human exploitation rescue operative,” or HERO, with the Department of Homeland Security, pursuing predators who collect and trade child pornography — more accurately termed, child sexual abuse imagery — on the internet.

“I fought hard to get back overseas with my platoon and once that wasn’t happening, I was able to find a way to keep serving my country” by rescuing children, Gaertner told Catholic News Service.

Gaertner, 29, was trained as a computer forensic analyst in 2012, one of 17 former military in the inaugural class of the HERO Child Rescue Corps. Few had prior experience with computers.

HEROs were then deployed across the country, integrated into investigation offices of U.S. Immigration and Customs Enforcement, to combat what ICE describes as the “growing epidemic of child sexual exploitation and abuse.”

Since over half of all child-pornography collectors are hands-on offenders, law enforcement can apprehend them by following the cyberspace trail of images — considered “crime scene photos” by investigators. Disturbingly, 83 percent of perpetrators seek images of pre-pubescent children, 39 percent want toddlers, and 19 percent: babies in diapers.

Within months of his assignment in Tampa, Florida, Gaertner — always accompanied by his service dog, Gunner — was mobilized in a case that wound up rescuing over 130 children.

Melvin Bridgers, 37, posing as a teenage girl, used multiple Facebook accounts to entice girls between the ages of 10 and 16 to send him sexually explicit pictures. He then coerced the children, threatening to tell their parents unless they sent him even more graphic images.

A mother in Houston tipped authorities about the predator based on a disclosure from her 12-year-old daughter that she was being pressured to send pornographic pictures of her 7-year-old sister.

Gaertner was with the ICE team that searched Bridgers’ house. His job is to collect electronic devices and secure illicit material stored on them.

Investigators found over 28,000 images and videos on Bridgers’ cellphone, including a substantial number of new victims.

Each digital image has “fingerprint.”

DHS has access to a library of all pornographic images already identified (images collected and traded between criminals) so the first step in an investigation is comparing the material found on a suspect’s electronics to the ones in the digital library.

Gaertner and a colleague then had to identify and locate previously unidentified victims seen on Bridgers’ phone, using data from his Facebook history as well as hints provided by the pictures themselves.

He traveled with agents who interviewed parents, getting consent to examine electronic devices used by their children.

Brand new to the job, Gaertner remembers, “I was shocked. I didn’t know what to think.”

“I was excited to be helpful in finding these kids, but you don’t realize the severity of this case work until you are knee deep in it,” said the former Marine, who also conducts Internet safety classes at schools for DHS.

The prime mover in getting the HERO Corps launched in 2013 was the National Association to Protect Children, or PROTECT, a nonprofit organization based in Knoxville, Tennessee.

PROTECT approaches the grotesque reality of child sexual abuse as a strategic threat that requires the intensity of a military campaign to eradicate it — which is why employing veterans is critical.

An extremely disturbing child pornography case, unfolding as the HERO Corps was under consideration, convinced policymakers a much stronger counterforce against child predators was required.

A Worcester, Massachusetts, man was sentenced to 27 years in federal prison for plotting to kidnap a child in order to rape, cook and eat him. Investigators discovered he had built a dungeon in his house for the purpose of torturing children and had over 20,000 images and videos of children including babies being violently raped.

“These terrorists exclusively target children and they are easy to find,” explained Camille Cooper, PROTECT’s director of government affairs and an expert in internet crimes against children, who helped design the HERO program.

“We didn’t know if the idea of employing veterans would work but it became one of DHS’s most successful programs. They needed a new mission, and children needed rescue,” Cooper explained.

She added, “The Department of Defense spent millions on their initial military training to make them very resilient. They have an advanced ability to compartmentalize what they see,” including disturbing images of rape and torture. Some 80 percent of the images involve rape while over 20 percent involve torture.

The HERO program has helped facilitate an impressive increase in arrests of people sexually abusing children via the internet and, possibly, helped suppress demand for child sexual abuse imagery.

According to data from ICE and the Internet Crimes Against Children task forces, a national network that coordinates federal, state, and local law enforcement and prosecutorial agencies, arrests of sex offenders trafficking in child abuse imagery increased from 2,040 in 2006 to over 10,300 in 2017.

“Child pornography is illegal, abusive, and a form of human trafficking because of a child’s inability to consent,” the U.S. bishops said in their 2015 pastoral response to pornography, “Create in Me a Clean Heart.” “There are many reasons why a child might become a victim of child pornography, including extreme poverty, deplorable neglect by his or her parents or guardians, or manipulation by child pornographers.”

“Children and youth exploited in this way face serious side effects and need plentiful resources for emotional, psychological and physical healing,” they said. “Most of all, they need to know that the abuse was not their fault or choice, no matter how their abusers deceived them.”

The U.S. is no longer the No. 1 consumer of child pornography.

“China and Russia have surpassed the U.S. in terms of number of IP (internet protocol) addresses seen trafficking in child sexual abuse images over peer-to-peer file sharing networks,” according to Cooper.

Gaertner, who has interacted with predators during investigations, said he cannot discern a pattern common to all offenders.

“We have arrested a wide spectrum of people, from high-level officials to people sitting at home all day,” he said. “To try to define it would give you a false sense of security.”

“Some of them say, ‘Oh, you finally caught me,’ but most of the time they don’t get it,” observed Gaertner. They don’t comprehend the harm they cause or the criminality they perpetuate.

Mary Anne Layden, director of the sexual trauma and psychopathology program in the University of Pennsylvania’s psychiatry department, has studied — and treated — men who sexually abuse minors, physically and via the internet.

“We don’t know a great deal about perpetrators. We know some things,” she cautioned.

“We know that perpetrators are typically repeaters. In some studies it’s in the 70 percent range that rapists, for example, are repeat rapists. We know there are certain factors such as sexual narcissism and sexual entitlement — belief systems that are ‘permission giving’ for this behavior,” Layden continued.

“So when you work with perpetrators, they say things like, ‘Well, sex is a need, and I have a right to have sex with anyone I want, because it’s a need,'” she told CNS. “They talk as though it is a need like air or food. Their belief is: I’m entitled to do this.”

She also described belief systems in which perpetrators put the responsibility on the child, claiming children seduce adults or they “enjoy it.”

“There is a strong cognitive element to this. A bunch of beliefs that say, ‘This is OK,’ and the belief gives you permission to do it,” Layden added.

Camille Cooper cut to the quick: “Are you going to reason with these people? The only prevention is prison.”

NEXT: Archbishop Gomez calls for ‘new humanism’ amid troubled times