Pope will visit school for imams, migrant center in Morocco 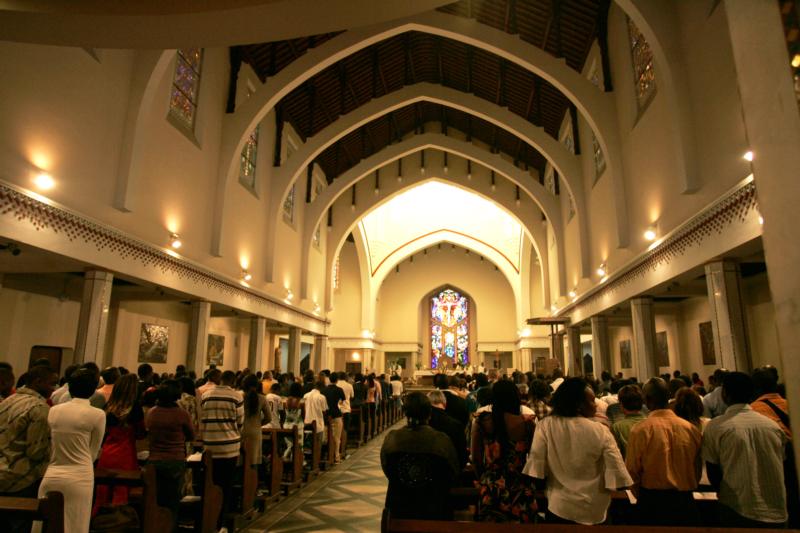 Worshippers pray in St. Peter’s Cathedral in Rabat, Morocco, Nov.12, 2008. Pope Francis will meet with priests, religious men and women and the ecumenical Council of Churches at the cathedral March 31 during his visit to Morocco. (CNS photo/Rafael Marchante, Reuters)

UPDATED – VATICAN CITY (CNS) — Pope Francis will travel to Morocco March 30-31 as a “servant of hope” to encourage the country’s small Catholic community, the migrants hosted there and all people of goodwill, said Archbishop Cristobal Lopez Romero of Rabat, the nation’s capital.

“He comes to fill us with hope, to give us strength, to help us get up again after being disappointed, to fill us with enthusiasm,” the archbishop told Fides, the news agency of the Congregation for the Evangelization of Peoples.

The Vatican Feb. 26 released the full, detailed schedule for the pope’s trip, which will include a visit to a school training an international group of Muslim prayer leaders and preachers, including women.

He also will visit a Caritas center assisting migrants and a social service center run by the Missionaries of Charity.

The visit to Morocco, where more than 99 percent of the population is Muslim, will give Pope Francis an opportunity to continue the reflections on Christian-Muslim relations he began in Abu Dhabi, United Arab Emirates, in February. As he did in Abu Dhabi, he is expected to highlight 2019 as the 800th anniversary of the encounter of St. Francis of Assisi and Sultan al-Malik al-Kamil of Egypt.

Here is the schedule released by the Vatican Feb. 26. Times listed are local, with Eastern Daylight Time in parentheses. (Rome goes on daylight time early March 31; Morocco does not change times.)

— 3:30 p.m. (10:30 a.m.) Meeting with the Moroccan people, government authorities, civic leaders and the diplomatic corps at the esplanade of the Hassan Mosque. Speech by pope.

— 5 p.m. (Noon) Visit to the Mohammed VI Institute for the Training of Imams, Morchidines and Morchidates (male and female preachers).

— 6 p.m. (1 p.m.) Meeting with migrants at the diocesan Caritas center. Greeting by pope.

— 10:35 a.m. (5:35 a.m.) Meeting with priests, religious men and women and the ecumenical Council of Churches in the Rabat cathedral. Speech by pope. Recitation of the Angelus prayer.

— Noon. (7 a.m.) Lunch with the Moroccan bishops and some members of the papal entourage.