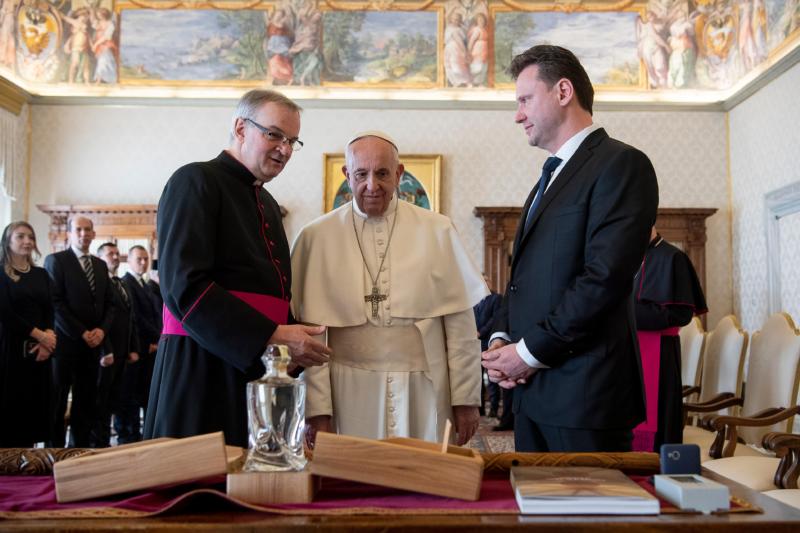 Pope Francis admires gifts given to him March 22, 2019, by members of the parliaments of the Czech Republic and Slovakia. The legislators were in Rome as part of their celebrations of the 1,150th anniversary of the death of St. Cyril, who with his brother, St. Methodius, evangelized Eastern Europe in the ninth century. (CNS photo/Vatican Media)

“I hope that such a significant spiritual heritage would give rise in all your fellow citizens to a desire for encounter and an openness to others,” the pope said March 22.

Members of the parliaments of the two nations were in Rome to mark the 1,150th anniversary of the death of St. Cyril. He and his brother, St. Methodius, are known as the “apostles to the Slavs.” In the ninth century, they brought Christianity to the lands that are now part of the two nations and translated the Bible into the local language.

The “spiritual and cultural wealth” left by the two brothers is something to be safeguarded and valued, the pope said. “Your history teaches that Christianity always has represented a source of the hope and strength needed to get up again, especially in the darkest and most difficult periods” of history.

Pope Francis urged the legislators to honor that history and heritage by helping their fellow citizens “learn to coexist in diversity through dialogue, sharing, building bridges and tearing down the barriers of mistrust and prejudice. With these attitudes people become witnesses of solidarity and peacemakers.”

The pope did not mention specific policy issues in his talk to the group, but both the Czech Republic and Slovakia — members of the European Union — have been reluctant to accept migrants and refugees. They were among a handful of nations that did not sign the U.N. Global Compact for Safe, Orderly and Regular Migration, which Pope Francis and the Vatican strongly supported.

Acknowledging the special role of politicians, Pope Francis expressed his hope that the legislators would be “leaders of fraternity, clear and irreproachable promoters of the common good so as to offer hope to those who elected you to such high responsibility.”

NEXT: Bishop criticizes ‘faith-filled’ Catholics who spread fear of Muslims