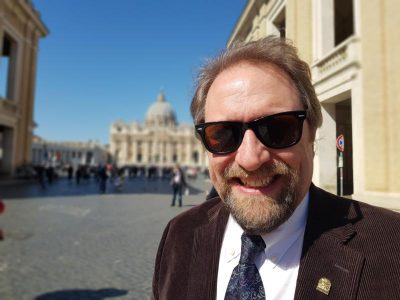 VATICAN CITY (CNS) — At a time when Catholics seem to be split between conservative or progressive factions, the life and works of English writer G. K. Chesterton can inspire men and women in the church to rise above conflict, said U.S. scholar Dale Ahlquist.

“People on the left and right both find things to connect to Chesterton,” Ahlquist told Catholic News Service March 22.

“Chesterton is a unifier,” he said. “I think he did see the potential for the schism that is going on right now, the great division between people. But it’s just a general splitting of society because we’ve lost our roots.”

Ahlquist’s latest book, titled “Knight of the Holy Ghost,” is “designed to introduce people to Chesterton,” who lived from 1874 to 1936.

“There are some excellent biographies out there that are very good. But sometimes, Chesterton can get lost in the details and I wanted to bring out the highlights, some of the most important features of his life so that he stands out,” he said.

Ahlquist, who serves as president of the Society of Gilbert Keith Chesterton, a Catholic lay apostolate inspired by the early 20th century writer, also makes the case for Chesterton’s sainthood cause.

In 2013, Bishop Peter Doyle of Northampton, England, appointed Father John Udris, a priest of the diocese, to conduct an investigation into Chesterton’s life and writings. The report, Ahlquist told CNS, has been completed and “recommends that the cause be opened.”

Now it is up to the bishop to request Vatican permission to open the cause.

In his book, Ahlquist dispels misunderstandings or falsehoods that some have cited as obstacles to Chesterton’s canonization, including the misconception that he was “rabidly anti-Semitic.”

“It’s one of those things that the more it gets repeated, the more it is believed,” Ahlquist said.

Chesterton, he argued, spoke out against eugenics, the controlled breeding of the human race to promote or eliminate certain traits, which rose to prominence in the United States and Europe, especially Nazi Germany.

Chesterton “was the one who attacked eugenics and all the great racial theories. He attacked Nazism in its nascent stage and was someone who really respected the Jews and defended the Jews,” Ahlquist said. “And so, it’s a completely unfair charge.”

Others, he added, object to his canonization because he enjoyed drinking, or they accuse him of being a “glutton because he was fat.” The latter charge, Ahlquist quipped, was not made against St. John XXIII or St. Thomas Aquinas before their canonizations.

“Chesterton has a great line,” Ahlquist told CNS. “He says, ‘I’m sure that the thin monks were holy, but the fat monks were humble.’ So, we deal with the fat objection, too.”

As for imbibing alcohol, he added, Chesterton argued against “the puritanical approach to drinking, which is that drinking is evil.”

“No, it’s not that wine and beer are evil things, they can just be abused like any good thing,” Ahlquist said. “He called puritanism the ‘righteous indignation about the wrong things.'”

The Catholic writer and philosopher may also find a kindred spirit in the current occupant of St. Peter’s chair.

As archbishop of Buenos Aires, Argentina, Pope Francis opened a conference sponsored by the G. K. Chesterton Institute for Faith and Culture in 2006 and also approved a prayer for Chesterton’s intercession.

However, several coincidences point to a greater connection between the pontiff and the philosopher, the author said.

Both share an affinity for St. Francis of Assisi: The pope adopted the saint’s name following his 2013 election while Chesterton took the name Francis when he was baptized. Like their namesake, both men shared a way of engaging with both Catholics and non-Catholics alike.

“Chesterton has a way of appealing to non-Catholics. I was a non-Catholic when I started reading Chesterton and he keeps making converts,” Ahlquist told CNS. “St. Francis is a saint that appeals to non-believers as well. He’s a universal saint, everybody likes St. Francis.”

Ahlquist also recalled a notable coincidence that points to a papal connection with Chesterton.

In his book, “St. Francis of Assisi,” Chesterton highlighted the importance of St. Benedict’s preservation of Christian culture and learning in the monastic system. On the other hand, he noted, St. Francis took the monastic order to the streets when he founded the Franciscan order.

“Chesterton has this great line,” Ahlquist recalled. “‘What St. Benedict stored, St. Francis scattered.’ When I read that line, it struck me.”

“Wow, we have two popes who are alive right now, one of them is named Benedict and the other one is named Francis,” he said. “So, it’s Chesterton accidentally being prophetic. Pope Benedict was the scholar, the learned one, and Pope Francis is the pope of the people who takes it out into the streets.”